"It wouldn’t take much imagination to predict the reactions in the West if China, Russia and Iran created a “strike group” and sailed it thousands of miles around the globe to menace the shores of Western nations" 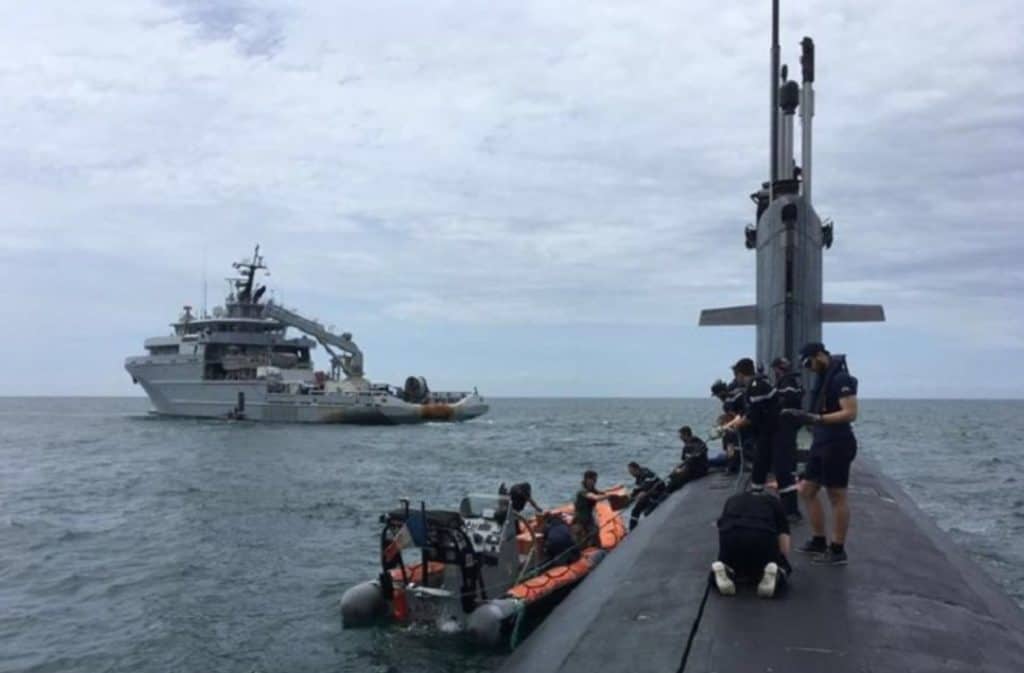 France has recently sent one of its nuclear attack submarines over 10,000 kilometers to the South China Sea for a “patrol.” It is the latest indicator of how strained the underlying credibility is of US foreign policy regarding the South China Sea and its growing conflict with Beijing.

While Washington frames its involvement in the region as “championing” for claimants in the South China Sea, it is recruiting allies farther and farther from its actual waters and appears to merely be using the confrontation to undermine Beijing, not support other nations in the region.

France24 in an article titled, “France wades into the South China Sea with a nuclear attack submarine,” would claim:

The week in France kicked off with a Twitter thread by Defence Minister Florence Parly revealing that French nuclear attack submarine SNA Emeraude was among two navy ships that recently conducted a patrol through the South China Sea.

“This extraordinary patrol has just completed a passage in the South China Sea. A striking proof of our French Navy’s capacity to deploy far away and for a long time together with our Australian, American and Japanese strategic partners,” she tweeted along with a picture of the two vessels at sea.

The mention of Australia, America and Japan is clearly a reference to American efforts to create a united front against China in the Indo-Pacific region. The omission of India, one of the supposed “Quad Alliance” members, should not go unnoticed. Even though it is mentioned elsewhere in the article, it is done as an afterthought.

France is the second European nation to sign up for Washington’s Indo-Pacific strategy, following the UK which has pledged to send a carrier strike group to the region later this year.

The UK Defence Journal in an article titled, “British Carrier Strike Group heading to Pacific this year,” would note that the UK’s latest aircraft carrier, HMS Queen Elizabeth, would also become involved in the South China Sea dispute along with what the journal reported as:

NATO’s most sophisticated destroyers — the Royal Navy’s Type 45s HMS Diamond and HMS Defender and US Navy Arleigh Burke-class USS The Sullivans as well as frigates HMS Northumberland and HMS Kent from the UK.

It wouldn’t take much imagination to predict the reactions in the West if China, Russia and Iran created a “strike group” and sailed it thousands of miles around the globe to menace the shores of Western nations, yet the provocative and revealing nature of Washington’s policies and the participation of nations in its Indo-Pacific strategy being drawn from further and further away from the actual region is treated as entirely normal, even necessary by the Western media.

The inclusion of the French and British in Washington’s Indo-Pacific strategy is necessary because the actual nations in the region, specifically in Southeast Asia, have little interest in provoking China or turning relatively common maritime disputes into a regional or international crisis.

The US, by attempting to do just that, is actually endangering peace, prosperity and stability in the region, despite posing as the underwriter of all three and on behalf of the very nations refusing to join its provocative naval exercises. Nations in the actual region refuse to join US military activities there specifically because they are seen as counterproductive and a needless, even dangerous escalation.

Creating Conflict, Not Resolving It

France in particular also has its military deployed across the continent of Africa, including in several of its former colonies.

The notion that France, alongside its other partners in carrying out military aggression worldwide, is becoming involved in the Indo-Pacific to confront aggression and expansionism rather than to participate in it itself, is dubious at best.

The France24 article would also note that:

In this increasingly tense maritime geopolitical context, France wants to restate that it has its own interests to look out for in the region. In 2019, the French defence ministry released a policy report, “France and Security in the Indo-Pacific” recalling that around 1.5 million French nationals live between Djibouti in the Horn of Africa and the overseas territory of French Polynesia. This means that Paris views its Indo-Pacific zone as stretching from the Gulf of Aden to beyond Australia.

In other words, Paris’ mission to the Indo-Pacific is a continuation of its colonial injustices in the region in past centuries, pursuing everything and openly for itself and its own sense of hegemony, that it, London and Washington are accusing Beijing of.

The West’s failing fortunes across Africa, the Middle East and Central Asia will not benefit from their collective economies and armed forces being stretched further still to confront an Asian nation in Asia, and one that is poised to surpass them all economically and militarily in short order.

For Beijing’s part, it has successfully reached this point through careful and patient planning, strategy and diplomacy. It will be very unlikely that Beijing will find itself drawn into a conflict with the West and will instead continue building ties within the region, particularly with Southeast Asia, creating its own regional order, and one built on economic cooperation rather than military confrontation, a process already well under way and why Washington feels the need to recruit Western European nations for its “Indo-Pacific” strategy in the first place.