First-Hand Account of Election Fraud in Detroit: ‘They Did Not Want Us to See What Was Happening’

Earlier this week, Michigan Secretary of State Jocelyn Benson denounced the lawsuit filed by President Trump’s campaign as “frivolous,” designed to spread “misinformation” and “sow seeds of doubt among our voters about the integrity of our elections process.”

The lawsuit alleges that Republican election observers, known as “poll challengers,” had been denied access to counting stations to observe the opening of absentee ballots, as required under state law.

Benson denied the allegation. Poll workers, she said, had been “following every rule meticulously” as they counted the vote “transparently with people from both sides of the aisle—both looking on.”

But that’s not what one Republican observer says she saw at the Detroit convention center on Wednesday, where she volunteered to be an official GOP poll challenger. Instead, she saw—and experienced—exactly what the Trump campaign says has been happening in Michigan and elsewhere: GOP observers are being kept away from counting tables, expelled, harassed, and prevented from doing the job of ensuring ballots are counted fairly.

Trisha Nesbitt, 31, is the Van Buren County Treasurer in southwest Michigan and has volunteered as an observer in past elections. When she heard the local GOP needed volunteers in Detroit, she drove to the city after work, went to the Republican meeting room at the convention center, and got her credentials as a poll challenger. That’s when things started to get shady.

“The election workers were not letting anyone in at the time,” Nesbitt told The Federalist on Friday. The workers told her and the other GOP volunteers that “the election hall was full.” So they waited. Eventually, they managed to get in by tagging along with a large group of union members who were being admitted to the hall where ballots were being counted—despite previous claims the hall had been “full.” Nesbitt and the others signed in, giving their names and Republican Party affiliation, and indicating the time they arrived. Then things got tense.

“When I was in the room it was very clear that we were outnumbered, I would say three to one,” Nesbitt said. Republican and Democrat poll challengers have different types of credentials, making it easy to tell how many Democratic challengers there were compared to Republican. Nesbitt estimates there were about 1,200 people in the hall but only about fifty or sixty GOP poll challengers—not enough to cover all of the tables where ballots were being counted.

Even so, when these Republican poll challengers came into the hall, the ballot-counting stopped. “It wasn’t too long after I got into the room that it became very apparent that there was no rush to be counting anything,” Nesbitt said. “For about four hours, over ninety percent of the counting boards had no activity.”

Asked why they stopped, Nesbitt replied, “I believe that they were trying to wait for us to leave, because we had an influx of volunteers who came into the room following the union members.”

Not only did the city election workers refuse to replace GOP observers who left, they also began expelling them on trumped-up infractions. “The first person I became aware of that was removed, was an attorney who was observing and he adjusted his face mask,” Nesbitt said. “And the election workers cited that as grounds for removal.”

That wasn’t all. When election workers expelled a Republican poll challenger, the ballot counters erupted in cheers. “That was the first one that I had heard very large cheers for,” Nesbitt said. “I’ll admit, at first I had no idea what was going on. I didn’t know why the election workers would be so boisterous over something. But he was escorted out by the police.”

Other GOP observers were kicked out for doing their job and challenging ballots, which election workers claimed was “hindering the process,” according to Nesbitt. She went on:

The ballot-counters were also not allowing Republican poll challengers to observe the ballot supplication process. If an absentee ballot can’t be read by the machine for whatever reason, the counters get out a blank ballot and fill it out with the information from the damaged ballot. This is supposed to be observed by poll challengers from both parties to make sure the counters aren’t changing anything from the original ballot.

But whenever Republican observers were present, said Nesbitt, “They would position their bodies in the way, and other election, workers at that counting board would position their bodies in the way, to prohibit us from being able to witness what was happening. Some would complain. And, you know, require the pole challenger to move farther away, you know, move six feet away because of COVID. It was very clear that they did not want us to see what was happening.”

If a GOP observer raised a concern about this, they were kicked out.

During this time, explained Nesbitt, it wasn’t entirely clear who was in charge or who was calling the shots. “It was very hard to see the hierarchy in the room.”

As Republican poll challengers kept getting kicked out for trying to do their jobs, Nesbitt took out her phone to record it. She sent a short video clip to her husband, state Sen. Aric Nesbitt, who posted it on Twitter.

My wife just sent this video of Detroit election workers cheering every time a @migop attorney is removed from the TCF Center, where absentee ballot counting is happening. She says they do this every time they eject a GOP poll watcher & that Dem watchers outnumber GOP 3:1. pic.twitter.com/Sx1aHCoChY

Nesbitt says she never saw a Democratic poll challenger be removed the entire time she was there, only Republicans, even though Democrats were doing the same kinds of things—leaving to get food or water, adjusting their masks, observing the process and challenging ballots. Some of the Democratic poll challengers, adds Nesbitt, were wearing Joe Biden campaign shirts and “Medicare for All” masks

Every time the Republican poll challengers tried to meet up to discuss what was going on, they were harassed by the city workers, the ballot-counters, and the Democratic poll challengers, “because of social distancing.”

“It was very clear that they were targeting us and finding any reason to get us removed.”

Nesbitt finally decided to leave after ballot-counters flatly refused to process military ballots in her presence. There were approximately 5,000 military ballots that all had to be transposed onto a blank form because the vice president had been omitted from them, Nesbitt explained. “When they started to distribute those ballots I was at a table to observe, and they would not begin the processing while I was standing there, despite all of the workers being at the table.”

“I’ll admit I felt very defeated and like our efforts were almost futile. At that point, that is when I decided to leave.” 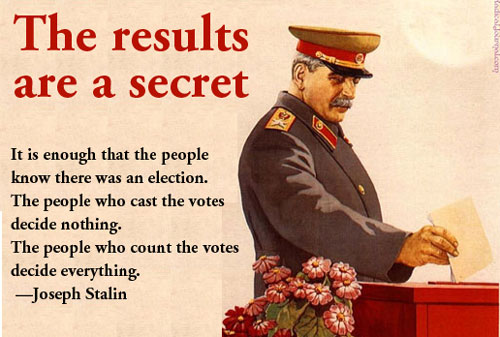 Cheat or not, The world wanted Trump out..he is out. Now let’s move on to our next American war. Back to normalcy. Killing civilians in the name of democracy.

Biden’s Plan Will Create Jobs……
14 Apr 21 by yuri
“free enterprise”= a religion in USA a failed model that ...

When Police Start Raiding Our…
14 Apr 21 by Peter pigott
May I say that the much hated Hitler was the ...

When Police Start Raiding Our…
14 Apr 21 by Bernie
You believe in God, and criticise a man who stands ...
Who or What Is Empire?