The Russians — only the most rebellious people in the world. God bless them!

Baza [“Base”] learned that in the chat rooms for the sale of illegal services, you can buy a certificate of injection of the vaccine against the coronavirus. And this is not just a “linden”, but a real document “with wiring” – that is, with the entry of information about vaccination in the federal register of vaccinated. This is done quickly, and most importantly – without injections at all. Journalist Andrei Kaganskikh decided to figure out how it works and gave himself a virtual vaccination.

Last week, the number of people infected with COVID-19 per day reached 14.7 thousand – such a high indicator has not been recorded by the headquarters for the fight against coronavirus since February. In order to stop the growth of the incidence, the mayor of Moscow even extended weekends, limited the opening hours of restaurants and cafes, and also returned other bans that the townspeople began to forget about. The leaders of other regions have taken similar steps. In addition, the authorities, clearly dissatisfied with the progress of vaccination, decided to further stimulate citizens to vaccinate. In Moscow, among those who dare to vaccinate themselves, will start raffle cars, in the region those who will make the first injection with “Sputnik” can take part in the drawing of an apartment, in Voronezh Governor Alexander Gusev proposed to reward labor collectives where the number of vaccinated persons will be more than 50%.

Despite all the power of state propaganda, Russians are clearly in no hurry to get vaccinated: how stated recently, the head of the laboratory of mechanisms of population variability of pathogenic microorganisms at the Gamaleya Center, Vladimir Gushchin, only 10% of Russians were completely vaccinated against coronavirus. This is significantly less than in Israel, Great Britain and the United States, where half or more of the population has already been vaccinated. Unlike Europeans and Americans, the inhabitants of Russia are not only in no hurry to get vaccinated, but also actively spoil the official statistics with “fake vaccinations”.

To the message of the correspondent of “Base” about the purchase of a certificate of vaccination against COVID-19 in the Telegram chat on trade in illegal services – fake and real certificates, services for finding information about people (“breaking through”) and trade in goods bought with money from stolen cards, – ten sellers responded. Messages about the sale of fake certificates before appeared in the media, but now dealers have learned not only to print counterfeit papers, but also to enter information about vaccinations in a special state register of vaccinated people.

As in the case of a real vaccination, the “false vaccination” procedure takes 21 days – after this time, the buyer receives marks about both vaccinations on his personal page in “State Services”.

To check the reality of this service, the Baza correspondent purchased a fictitious vaccination in his own name. The very next day, in his personal account on “Gosuslugi”, a diary of observations really appeared with a note about the first injection of the Sputnik V vaccine, and the dealer sent a screenshot from federal register of vaccinated, confirming the entry of the correspondent’s data. Health workers have access to this register and the ability to update it, but the official documentation of the system does not specify which ones.

The journalist, disguised as a buyer, interviewed a dozen more sellers of certificates from chats in Telegram and another from the largest Russian-language punching forum. The cost of the service is on average from 10 to 20 thousand rubles. [$140 to $280.]

According to dealers, they all work in the same way. To carry out a “virtual” injection, the seller of the certificate asks the buyer for passport data and SNILS number. You also need to have a confirmed account on “State Services” – this will display the “observation diary” and it will be possible to check whether the dealer really organized a fake injection.

From the doctors’ point of view, the procedure looks exactly the same as a real vaccination. But without a patient. In this case, the ampoule is disposed of as if the vaccination had been carried out. “It is opened, poured out, it’s just, if suddenly what kind of check will be, it’s difficult to explain where dozens of extra vials came from with the vaccine,” one of the service sellers says in detail. They do this because the vaccines are numbered, explains another source from Baza.

Earlier, the Ministry of Health reported that the maximum selling price of one two-component vaccine “Sputnik V” is 1942 rubles.

“When the vaccine appeared, the head physician gathered us. He said that if we, someone from close relatives or friends, need to make a certificate without vaccination, then this can be done. The data is simply entered into the system, and the vaccine itself is disposed of. Many took advantage of it. There were many skeptics among doctors in general – among our staff there is a fairly high percentage of those who did fictitious vaccinations. Well, they brought relatives with friends, ”an employee of a medical institution, who was aware of fictitious vaccinations, told Baza.

A physical certificate with the necessary seals can also be obtained for a fake vaccination. In the case of our correspondent, the document was sent even before the second vaccination – the seller offered to fill out the certificate on his own. 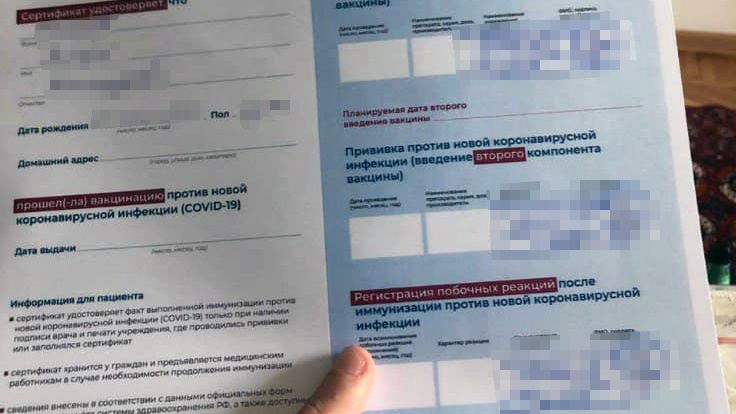 Judging by the information from the website “Gosuslug”, the journalist was vaccinated in a polyclinic in Saratov, despite the fact that he had never been in this city. To secure an offer for every day of the week, one dealer in counterfeit certificates needs multiple vaccination doctors. Two dealers surveyed by Base have enough doctors to sell certificates seven days a week.

The stream of people wishing to buy them is replenished as the news about “compulsory vaccination” emerges.

In May, the Deputy Chairman of the Security Council and former Prime Minister Dmitry Medvedev made a careless statement: “… We proceed from the voluntariness of vaccinations. But sometimes, in the interests of the state, in the interests of protecting the overwhelming majority of the population, such decisions can be of a generally binding nature.” His words were also picked up in the regions: for example, on Sakhalin the head of the local Ministry of Health Vladimir Kuznetsov state that the regional authorities are considering the possibility of introducing compulsory vaccination of residents against coronavirus before planned hospitalization and departure to a sanatorium, and the head of Yakutia instructed the heads of municipalities and city districts to issue regulations “on compulsory vaccination” (he later denied the “compulsory” vaccination. – “Base”).

The growth of those who want to buy a vaccine without vaccination is also stimulated by the actions of some civil servants:

“At our work [a budgetary educational institution], the bosses ordered all personnel to be vaccinated in January by order. It is clear that such an order is illegal, but failure to comply can lead to big trouble, up to and including dismissal. Since the side effects of the vaccine were not clear, I decided to make a “left” certificate. An acquaintance of mine works in a metropolitan clinic. She said that she could get a certificate without a real vaccination. And it cost only 3000 rubles [$40]. I transferred the money to the card, sent the policy number, and then watched as notifications about the appointment for the first vaccination appeared in the personal account in UMIAS, and after 21 days – for the second. When the vaccination deadline passed, they called me and said that I could pick up the certificate. I came to the entrance of a friend of mine, and she gave a certificate “,

It is not possible to objectively assess the scale of the trade in counterfeit certificates. There are several large channels in Telegram with offers to buy such fake vaccinations, but their subscribers are obviously screwed up, and users of specialized chats call their administrators “scammers”. 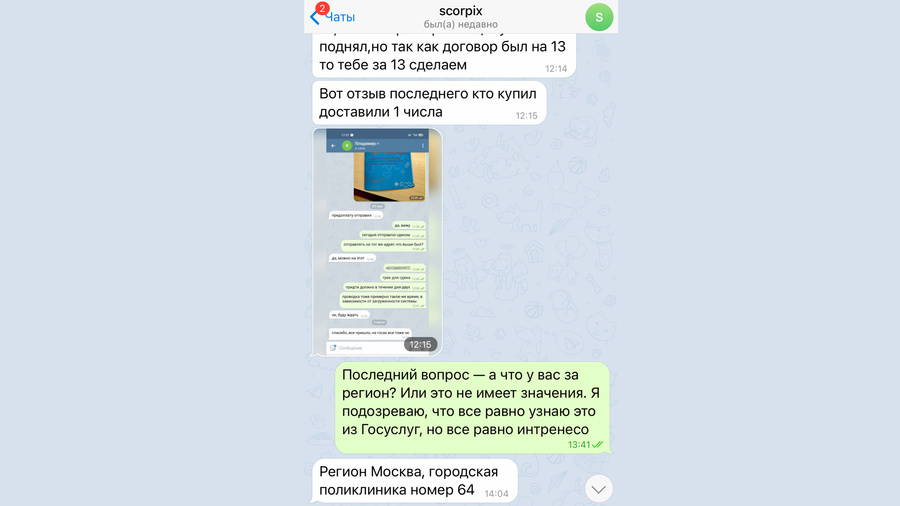 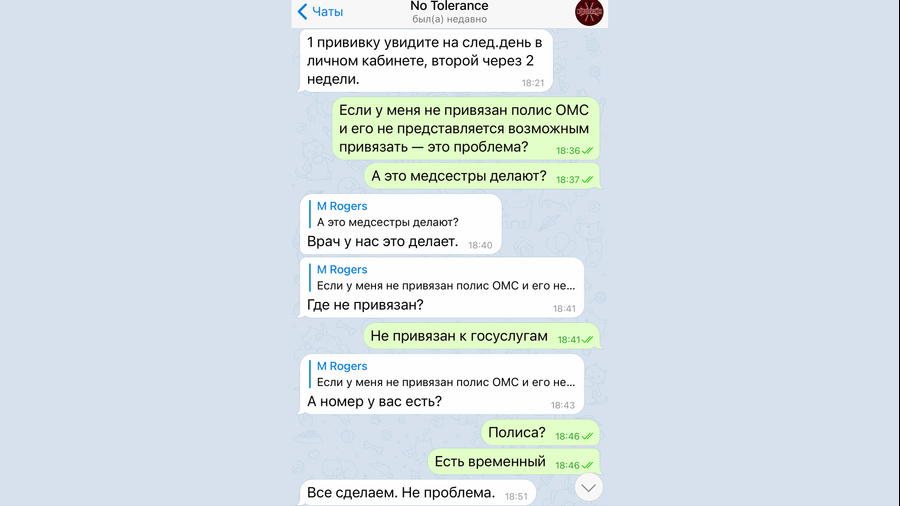 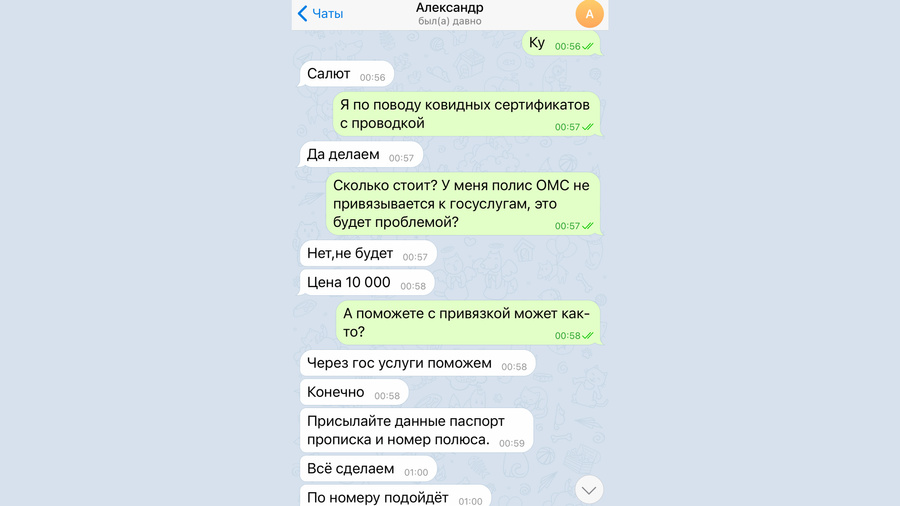 In order not to get on the “scam”, the correspondent of “Baza” used the services of a “guarantor” – this is how a third party is called on the virtual black markets who monitors the execution of the transaction. The money is transferred to the “guarantor” to the account of the payment system “YuMoney” (formerly “Yandex.Money”), and the seller of the certificate receives them only after the last fake injection of the vaccine.

There are other risks as well. Thus, the use of such a certificate most likely falls under Article 327 of the Criminal Code (the use of a knowingly forged document), said lawyer Yakov Gadzhiev from the Yukov and Partners Bar Association. Doctors, he says, can also be held liable under Article 327, and also under Article 236 of the Criminal Code (liability for violation of sanitary and epidemiological rules). “Among other things, both of them may be responsible for receiving and giving a bribe to an official,” Hajiyev said.

One of the certificate sellers shared that he stopped trading due to too many orders. “In four months of work, 35 people [were vaccinated], not including ourselves and the employees,” says the seller who sold the certificate to the correspondent of Baza. Then he notes that certificates are not his main focus of work. “Now a lot of people will need to make certificates, if you bring friends – 10 percent of the amount for you,” writes another seller.

The representatives of the Ministry of Health did not answer the questions of the “Base”.