Despite all the arguments and requests of the committee to save the plant, headed by the former director, Colonel Alexander Shinkarenko, Rostec sold the 9th CARZ for its further disposal.

Let’s start with an article on the Military Review, which was read by almost a million people and which caused a strong reaction.

Why does GABTU not want to repair military equipment? Yes, the web archive because we had to pull the article from publication.

Then there was a wave raised by several media and Saratov TV channels, the governor of the Saratov region Roman Busargin stood up for the plant, it came to Moscow.

In general, everything was quite joyful and promising: the governor was “for” the revival of the plant, these are jobs, this is money for the budget, in general, everyone who fought for CARH No. 9 noted the active and positive work of Roman Busargin. He raised the deputies of the State Duma, the deputies got involved in the work, there was a meeting with Volodin, who promised to support fellow countrymen (Volodin himself was a native of the Saratov region) and kept his word. 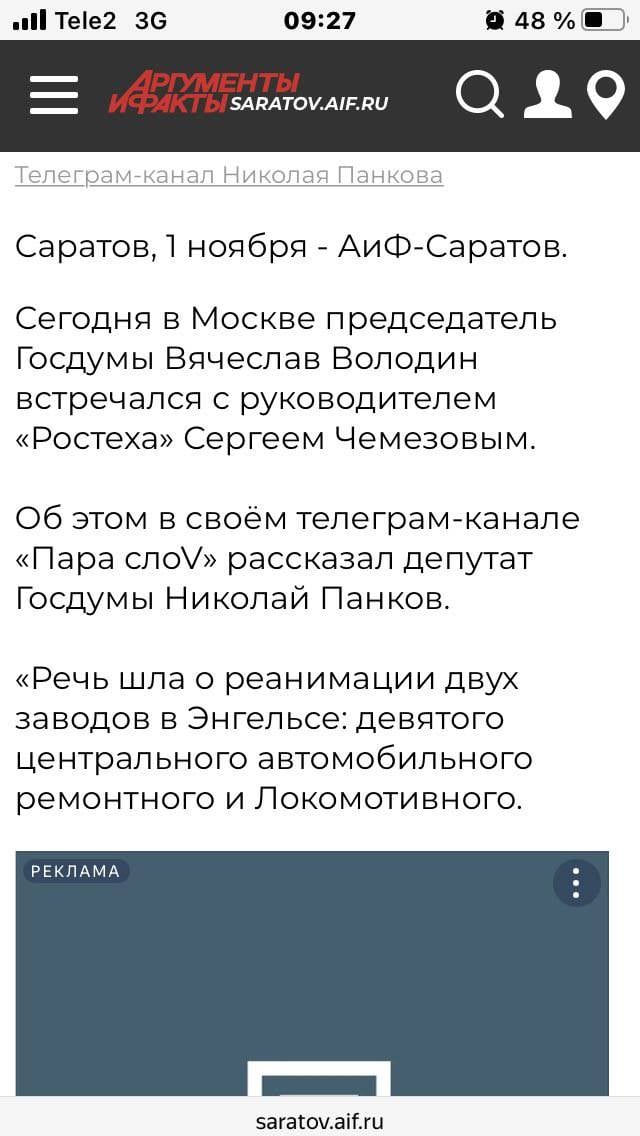 Many people talked about this, it’s enough for us that State Duma deputy Nikolai Pankov wrote on his telegram channel and another deputy, Alexander Strelyukhin, whom Volodin appointed to oversee the issues of CARZ No. 9 and the locomotive plant, gave an interview in which he said:

“Vyacheslav Viktorovich instructed to take this topic into work. Grateful for the trust. She is very close to me, she worked as a director at the Locomotive Plant, she is also well acquainted with the activities of the 9th CARZ. Ready to work for results.” 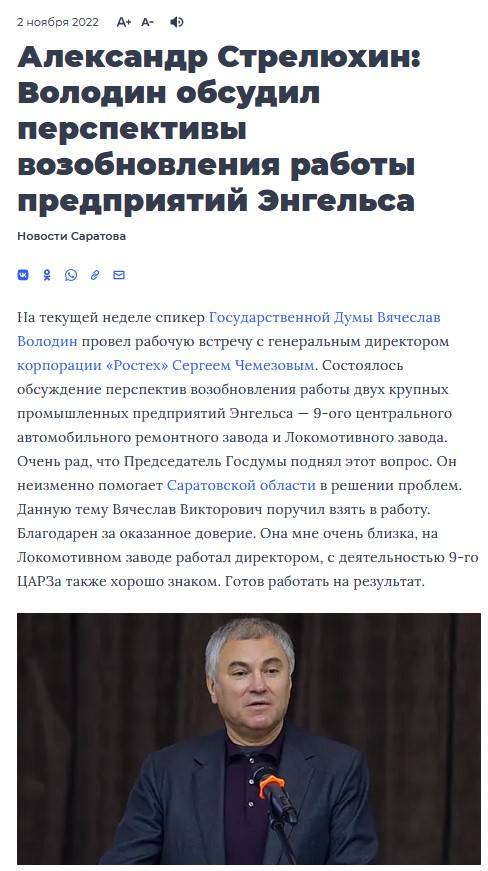 What Volodin and Chemezov were talking about, we will never know. And the result was as follows: in the fire order, CARZ No. 9 was sold.

But before that, following the results of the meeting, a commission was sent to the plant, headed by a representative of KamAZ JSC Petrushenko D.V., Remdiesel employees took part in the commission.

The commission, having visited the plant, presented a report from which it followed that there was nothing at the plant except for two drunken guards and three dogs. The information was received by the initiator of the revival of the plant, Colonel Shinkarenko, from the representative of JSC “High Precision Complexes” Ryazantsev, who was also contacted with the issue of taking CARZ No. 9 under his wing. Ryazantsev was surprised when Shinkarenko presented him with documents showing that instead of one plant there were TWO, since CARZ No. 9 also has a branch in the city of Samara, the former 16th ARZ. And five hundred items of equipment and property. 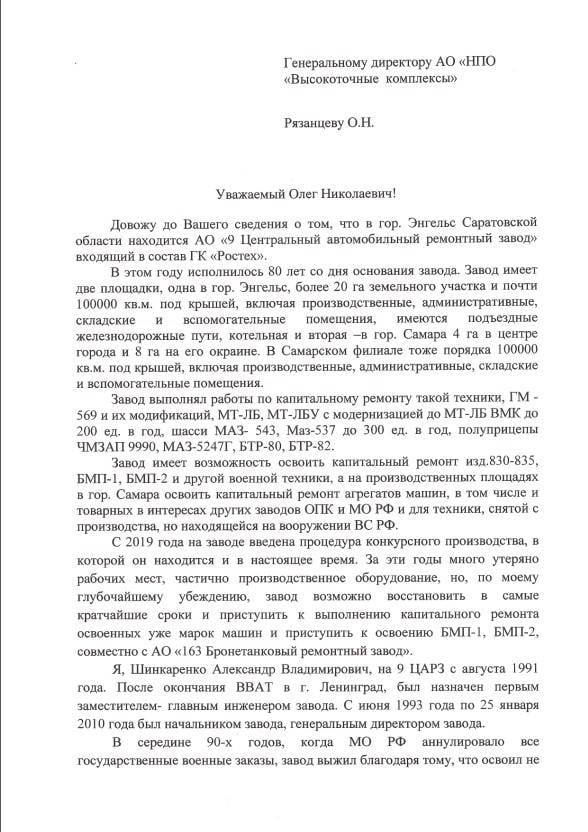 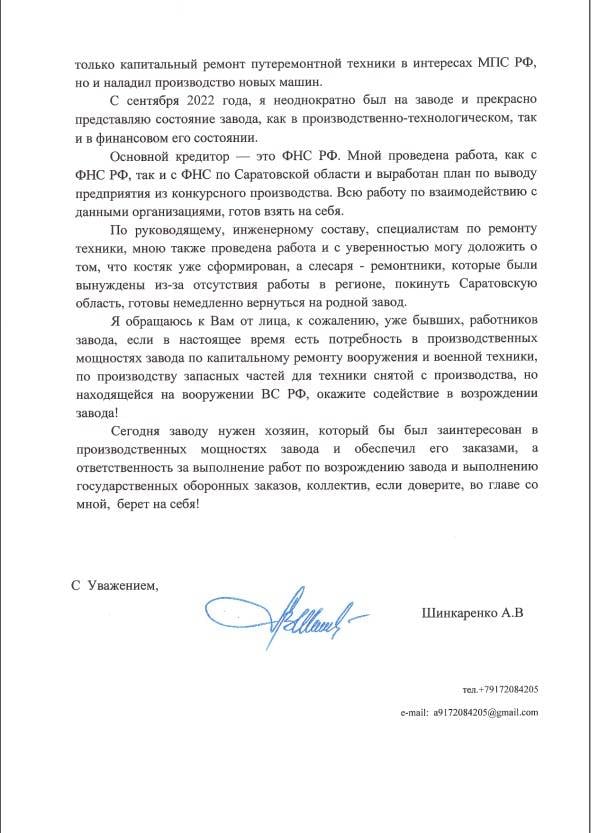 In general – not only walls.

JSC “NPO High Precision Complexes” did not believe the reports of “KamAZ” and sent its commission, headed by A.V. Shevtsov. True, “Complexes” would need a plant with high-tech machines for the production of spare parts, therefore it did not grow together with the VTK, to our great regret.

And on December 30, 2022, information was published (Appendix 1) that JSC “9 CARH” was sold to a private entrepreneur from Tver, Zaitsev Nikolai Kirillovich.

It is difficult to judge how the declared retail trade via the Internet was carried out by IE Zaitsev, apparently to the envy of many, because Zaitsev laid out the 245,035,555 rubles 55 kopecks offered by him as the only bidder for the plant.

However, it follows from the text that IP Zaitsev acts in the interests of Engelssky Metal LLC (clause 6 on sheet No. 2). 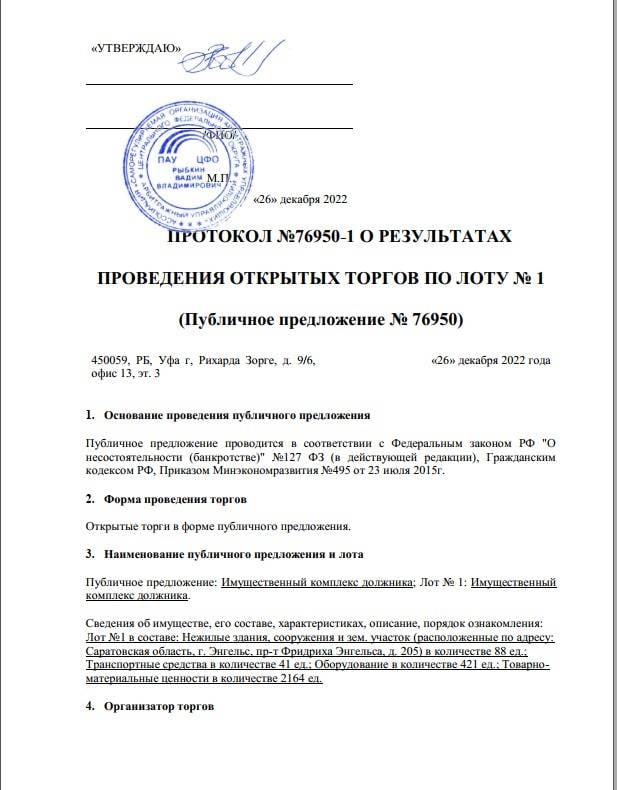 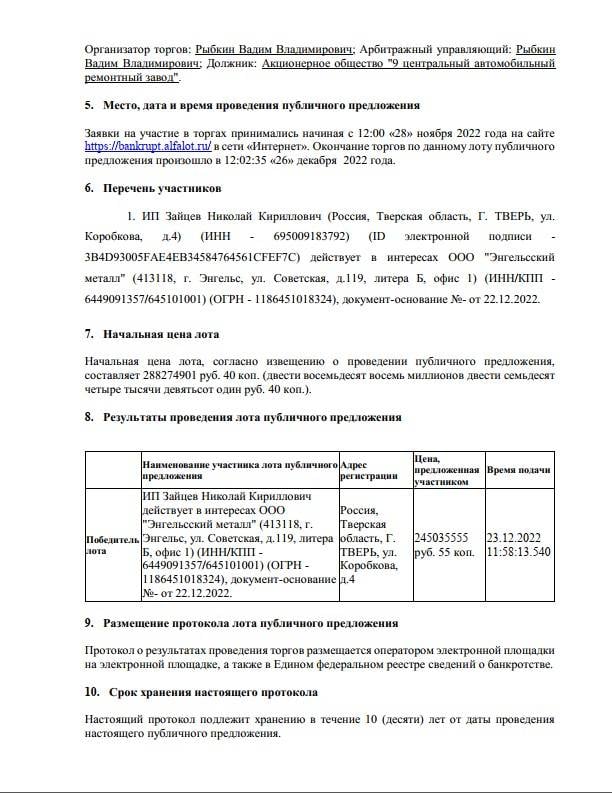 As follows from the site, the company does not repair equipment. And the plant acquires solely in order to destroy it. For Engels Metall has been operating in the market of ferrous and non-ferrous metals since 2018 and is part of the financial and industrial group of companies.

Dismantling of metal structures, buildings and structures is an integral part of the process of selling rolled metal, harvesting and processing scrap. EM has a lot of experience in this area.” 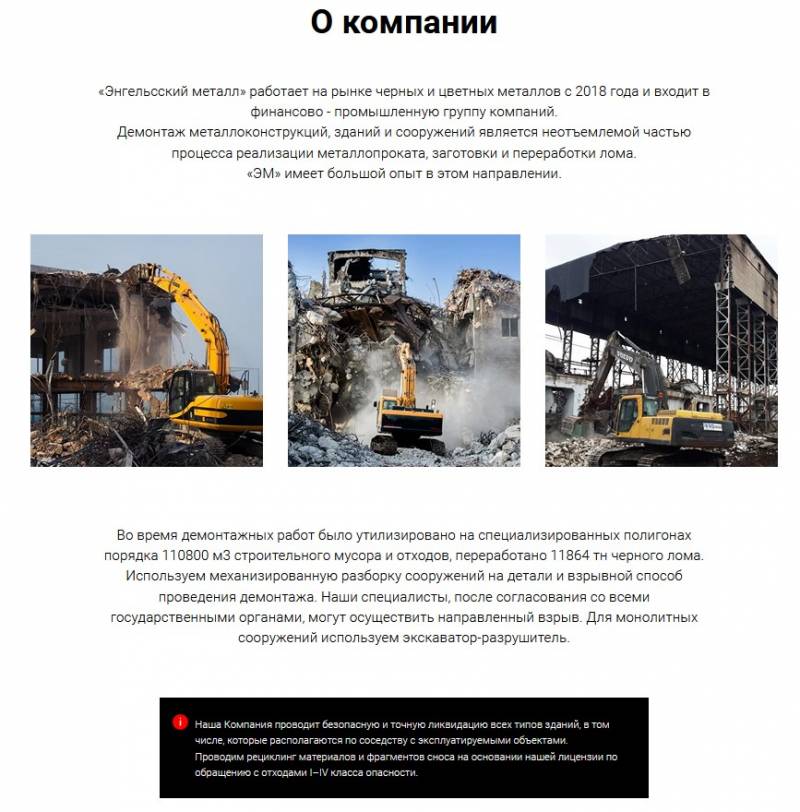 And as last year, the girls from the press service of RT-Capital assured me … How they try to find a buyer for a completely unnecessary and unprofitable plant in such a way as to save and increase, continue operation, and so on.

The plant was sold for subsequent destruction. If you follow link No. 1, then there, in the text of the document, you can see a link to a list of everything that is included in the lot.

And there you can see more than 400 positions. Buildings, machinery, machines, cranes… It’s worth taking a look at the list to see how it fits “blank walls”.

And this is where the questions begin.

According to the certificate submitted to the governor of the Saratov region, the authorized capital of JSC “9 CARZ” together with a branch in Samara is 817,668.0 million rubles.

It turns out that the amount offered for the liquidation of the plant is about a fifth of the entire debt.

The plant, which could be repaired according to a certificate signed by Colonel Alexander Shinkarenko, the capacity of the plant, even after they were reviewed by the bankruptcy trustee, remained such that it would be possible to repair up to 300 BMP-1 or BMP-2 vehicles a year when working in one shift and 450-500 machines when working in two shifts.

Shinkarenko is sure that it is realistic to equip the plant to work in two shifts. And then the combat vehicles can be repaired at a small distance from the front line.

Let’s take the railway junction of Likhaya station as the point of departure, as a place capable of loading equipment onto platforms with maximum speed and convenience and having the ability to send equipment to different regions of the country.

From Likhoi to Engels by rail about 650 km. Let’s look at the factories that will be able to repair the same infantry fighting vehicles.

The nearest one is 163 BTRZ in st. Kushchevskaya, Krasnodar Territory. But this relatively new repair plant (2009) is a structural subdivision of Uralvagonzavod, that is, it is focused primarily on tanks .

Next, we have the 114th BTRZ in the city of Yekaterinburg. Almost 2000 km from Likhoi.

And the last place is 560 armored personnel carriers in the village of Vozzhaevka, Belogorsk district, Amur region. About 6,000 km.

For certain reasons (government order for the production of new equipment), we do not even consider KurganMashZavod.

Obviously, the plant in Engels could save just a lot of money and (which is no less important) time on transporting broken equipment to the place of repair.

Oh yes, I forgot. We will build two new repair plants! And in a couple of years they will definitely build it.

I am very grateful to fate for giving me the opportunity to at least somehow help real people with a capital letter – the council of veterans of the 9th CARZ, headed by a real officer. Comrade Colonel Alexander Shinkarenko will forever remain for me an example of honor and service to his army. I was very glad to be in the same trench with him.

And I am very happy for the residents of the Saratov region, who have such a governor. Roman Busargin is an example of how to rush into battle for the interests of your region. Unfortunately, even the powers and capabilities of the governor are not enough.