Excellent Video for Background on the Ongoing Idlib Battle in Syria 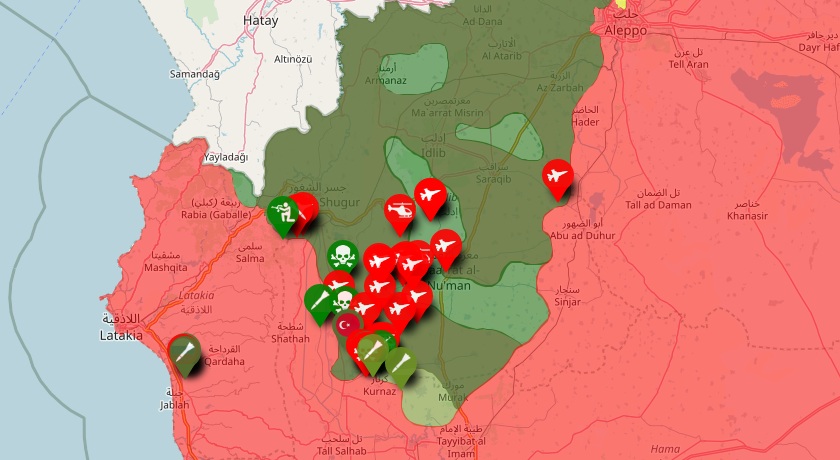 The offensive of Idlib. I’m going to address this video with as few maps as possible because the situation is changing in the north-west of Hama and southern Idlib every single moment. So, the map of control could change before I upload it on YouTube.

During the course of the war in Syria, wherever the Syrian Army launched a military offensive to liberate an area, the SAA leadership gave the militants the choice to surrender and join the reconciliation programme, which means the ex-militants could return to their civil life without legal repercussions. Or they leave to Idlib by the green buses.

After 8 years of war, Idlib has become a safe haven for criminals, thieves and terrorists or as Brett McGurk – the U.S. government’s Special Presidential Envoy for the Global Coalition to Counter ISIS – called Syria’s Idlib: “the largest Al Qaeda safe haven since 9/11 tied directly to Ayman al-Zawahiri [current leader of Al Qaeda].”

So, let’s agree on one thing, Idlib is not a haven for democratic rebels or opposition fighters as some mainstream media journalists claim.

In September 2018, Russia and Turkey agreed to create a demilitarized zone in Idlib to give a chance to Erdogan to solve this dangerous situation. The deal included that:

Of four important steps of the agreement, how successful was Turkey? In my estimation, Turkey didn’t fail to implement the agreement, because it had no intention from the first place to impose a deal that is in favour of the Syrian government. Ankara wants to strike certain deals with Damascus before cleaning Idlib from the terrorists, and President Assad won’t give Erdogan what he wants, which is a so-called safe zone in the north, that means a de facto occupation by Turkey of the areas occupied by the US-backed Kurdish forces.

Additionally, while the Syrian government accepted the demilitarized buffer zone deal in Idlib, the strongest terror groups in Idlib rejected the deal, such as the Turkistan Islamic Party (the Uyghurs from China), the Guardians of Religion Organization, Ansar al-Tawhid, Ansar al-Din Front, and Ansar al-Islam, Hay’et Tahrir al-Sham or Al-Qaeda.

These terrorist groups fired rockets and missiles on daily on the residential areas in the Syrian-Christian towns of Skeilbiyyeh and Mahardeh, on the coastal cities of Latakia and Tartous, and on Aleppo from its western suburbs.

Now, the Syrian Army launched a ground offensive on northwestern Hama and southern Idlib. So, let’s discuss together two important aspects of this battle:

The first one is: what kind of factions the Syrian army is fighting in Idlib and Hama? The vast majority of these groups are Islamist Salafist groups, their ultimate goal is to create an Islamic state based on the Wahabi and Muslim Brotherhood ideology.

The strongest force in Idlib is Hay’et Tahrir al-Sham or Al-Qaeda and their goal is an Islamic State. The number of fighters estimated between 12 to 30 thousand.

Aharar al-Sham is also a Salafi group that calls for an Islamic state. The number of fighters estimated between 18 to 20 thousand.

Jaish al-Izza which has been supplied with anti-tank missiles by the United States is also a Salafi group and an ally to Al-Qaeda. The number of fighters estimated between 2 to 3 thousand.

The Turkistan Islamic Party or the Uyghurs of China. The number of fighters estimated between 5 to 10 thousand.

The Tajiki, Saudi, Egyptian, Tunisian and terrorists from all over the world are estimated by hundreds.

In fact, no one can make a concrete estimation, but let’s agree on one thing: there are tens of thousands of Salafi Jihadists in Idlib that should be eliminated.

One thing worth to notice, the green buses offer is not on the table for Idlib terrorists. So, what options left?

In my estimation, the Syrian Army will divide the battle into different stages. In the first stage, the SAA will attack the terrorists on the demilitarized zone and capture it, then advance to Jisr al-Shighur al the way to Saraqib. Similarly, from Morek, to Maaret Numan until Saraqeb, in a bid to reopen the M4 and M5 highways and reconnect Aleppo to Damascus and to the coastal cities.

The other places, especially to the west of Idlib, after liberating the upper mentioned regions, the SAA can limit the presence of the terrorists in this area, near the borders with Turkey, a step that could pose a security threat to Turkey and force Ankara to negotiate on its withdrawal and occupation of Syrian territories in exchange to cleaning that area from the terrorists.

Geopolitics aside, if any sanity left among the local fighters, I hope they distance themselves from the terrorists and take the reconciliation option and return to their civil life, to spare bloodshed among all sides. But previous examples have proven to us that they don’t learn a lesson.