The 'Resistance' had set the stage for a familiar scenario 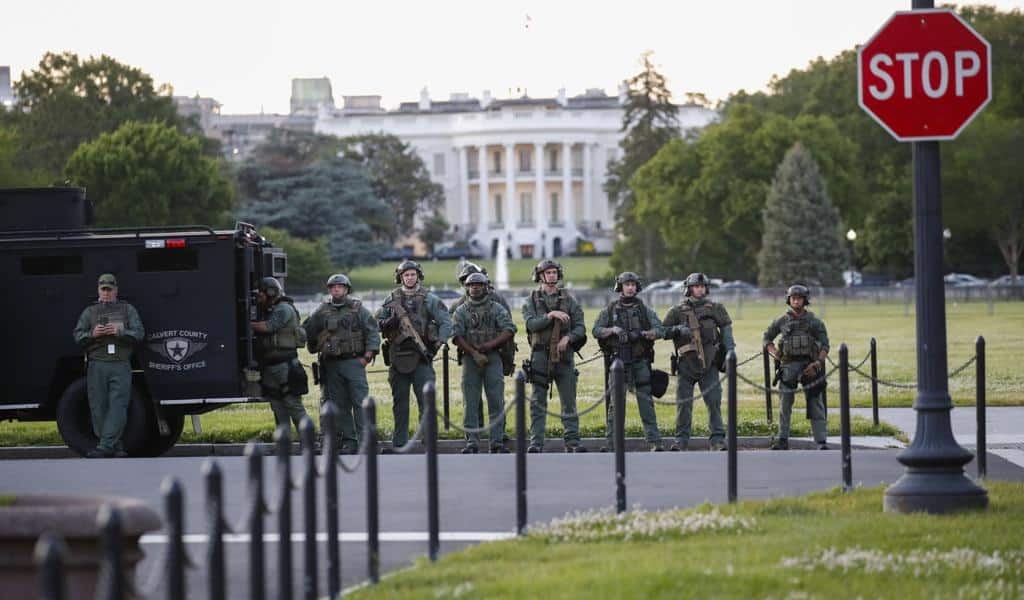 So, the GloboCap-Resistance Minneapolis Putsch appears to have not gone exactly to plan. Once again, Trump failed to go full-Hitler, despite their best efforts to goad him into doing so. They gave it quite a good shot, however. It was more or less a textbook regime-change op, or “color revolution,” or whatever you call it. All the essential pieces were in place. All they needed Trump to do was declare himself dictator and impose martial law, so the generals could step in and remove him from office.

Unfortunately for the Resistance, Trump didn’t do that. Instead, he did what he usually does, which is make a total ass of himself on international television. Which … OK, was cringeworthy, but didn’t quite provide the GloboCap gang with the pretext they needed to perp-walk him out of the Oval Office. Which, needless to say, was incredibly frustrating. After four long years of propaganda foreplay, there we were, finally at the moment of truth, and Adolf goes and loses his erection.

This guy is the worst literal Hitler ever.

Still, as far as regime-change ops go, and given that this one was a domestic operation, so trickier than the usual foreign version, I’d give the Resistance a B+ for effort.

Now, before my “conspiracy theorist” readers get too excited about where I’m going with this column … no, this was not a “fake” uprising. There was an authentic uprising at the center of it. There’s always an authentic uprising at the center of every regime-change op, or at least the type that GloboCap has been carrying out and attempting recently. Tunisia, Libya, Egypt, Syria, the Ukraine, Bolivia, Venezuela; these things go pretty much by the numbers.

Here’s a quick breakdown of how that works.

First, you need your civil unrest, large-scale protests, rioting, looting, indiscriminate violence, and so on. Any number of “trigger events” will be sufficient to get this going. Once it is, you can grow it and focus it. A lot of this unrest needs to be authentic, so it’s best to conduct an overwhelming multi-year propaganda campaign to delegitimize and demonize your target as some sort of treasonous Hitlerian monster who’s responsible for every major problem in the country. That way, no matter which trigger event gets things going, it will be his fault.

You will want your local government officials to allow this civil unrest to go on until it reaches the point where rioters and looters are rampaging through the hearts of cities, raiding both high-end corporate chain stores and local mom-and-pop-type businesses, and brutally assaulting their defenseless proprietors. This does not mean that these local officials have to restrain or stand down their cops. On the contrary, you want them to unleash their cops, on the protesters, rioters, and TV reporters (during their “live” reports, if possible), and just generally beat the living crap out of everyone. The goal is to generate as much hatred as possible against the regime you are trying to change, and to pressure your designated Hitler-target into losing his patience and overreacting, so you want things to get extremely ugly.

Then, you unleash the power of the media to whip folks up into a mindless frenzy of rage against your designated Hitler. You have your “respectable” pundits publish articles calling for his removal from office. You get the military (and former military) to start making noise about how your Hitler is out of control and on the brink of fascism.

Then you wait for your Hitler to overreact and attempt to call in the military and impose some form of martial law, at which point you can safely depose him, and pretend that democracy has won the day.

The media is essential here, because you need to convince the majority of the public (i.e., not just the people protesting and rioting) that things have gotten so out of control, and your imaginary Hitler has gotten so dangerous, that a military coup is the best solution.

“We are teetering on a dictatorship” — CNN“‘Words of a dictator’: Trump’s threat to deploy military raises spectre of fascism” — The Guardian

“The Trump Presidency is Over.” — The Guardian

Also, while the media are doing their thing, you want to get any former members of the intelligence community (or the secret police) to issue public statements like this:

“There should be no place in American society, much less in our government, for the depravity being demonstrated daily by Donald Trump. Members of his Cabinet who enable such behavior are betraying their oath of office by supporting an increasingly desperate despot.” — John Brennan, former CIA director

Then you bring the politicians and the military in. This kind of language will usually do it:

“The fascist speech Donald Trump just delivered verged on a declaration of war against American citizens. I fear for our country tonight and will not stop defending America against Trump’s assault.” — Senator Ron Wyden

“‘There is a thin line between the military’s tolerance for questionable partisan moves over the past three years and the point where these become intolerable,” a retired general said.” — The New York Times

“We must reject and hold accountable those in office who would make a mockery of our Constitution … We can unite without [Trump], drawing on the strengths inherent in our civil society. This will not be easy, as the past few days have shown, but we owe it to our fellow citizens; to past generations that bled to defend our promise; and to our children.” — General James “Mad Dog” Mattis, former Secretary of Defense

Once the generals have started in growling, you get the media to hype that, hard. Headlines like these will get people’s attention:

“The US president’s desire to act the strongman poses urgent questions that America’s generals, voters and allies must all answer” — The Guardian Editorial Board

If you can, it is always a really nice touch if you can drum up … oh, let’s say 280 former national security officials who are really concerned about the state of democracy and “the misuse of the military for political purposes,” and get them to spontaneously call each other up and decide to write a letter together accusing your Hitler of “dividing Americans,” which the media can then disseminate, widely.

And, of course, what you need for the “educated classes” is an official propagandist like Franklin Foer (who broke the big story about the non-existent “Trump-Russia server” back in 2016 and was rewarded for his service to GloboCap with a lucrative staff writer position at The Atlantic) to come right out and explain that what’s happening is a textbook regime-change operation (because you don’t have to dupe the “educated classes,” most of whom will already be on your side). Something more or less like this:

“Twitter’s decision to label Trump’s posts as misleading was a hinge moment … once Twitter applied its rules to Trump — and received accolades for its decision — it inadvertently set a precedent … a cycle of noncooperation was set in motion. Local governments were the next layer of the elite to buck Trump’s commands. After the president insisted that governors ‘dominate’ the streets on his behalf, they roundly refused to escalate their response. Indeed, New York and Virginia rebuffed a federal request to send National Guard troops to Washington, D.C. Even the suburb of Arlington, Virginia, pulled its police that had been loaned to control the crowd in Lafayette Square. As each group of elites refused Trump, it became harder for the next to comply in good conscience. In Sharp’s taxonomy, the autocrat’s grasp on power depends entirely on the allegiance of the armed forces. When the armed forces withhold cooperation, the dictator is finished.”

As I said, it went pretty much right by the book.

After four long years of official propaganda designed to convince the Western masses that Donald Trump is literally Hitler, GloboCap, the liberal Resistance, and the corporate media all did their best to harness the authentic protests and rioting that routinely follow the murder of an unarmed Black person by the cops, and use it to remove him from office. It would have been a spectacular catharsis, a fitting climax to the War on Populism, but Trump refused to play his part … so, OK, maybe he’s not as dumb as I thought, or at least not totally suicidal.

No matter, it’s still a big win for GloboCap. Forcibly removing Trump from office is, and has always been, gravy. The main goal of the War on Populism is to delegitimize and demonize him, and everyone who voted for him (and Jeremy Corbyn, and even Bernie Sanders, and everyone who voted for them). Trump is just a symbol, after all. It’s the dissatisfaction with global capitalism (and its smiley, happy, valueless values, and its post-ideological ideology) that GloboCap is determined to crush, so they can get back to the unfinished business of restructuring the entire Middle East, and anywhere else that’s not playing ball, and dissolving what is left of national sovereignty, and transforming the world into one big marketplace, where there will be no fascists, no evil Russians, no religious extremists, no racist statues, no offensive movies, or books, or artworks, no more unauthorized ass-clown presidents, and everyone will be “contact-traced” with their digital health-certificate implants, and the children will stand inside their little “social-distancing” boxes and circles and sing the Coca-Cola theme song through their anti-virus masks at school …

Sorry … I got a little off-track there. I forgot that this was strictly about racism, and police brutality, and nothing else. I’ll try to stick to the script from now on, but it might be difficult, given my “privilege.” Maybe, if I wrapped myself in kente cloth and got down on my knees in public, that might help me get my mind right. Or, I don’t know. What do you think?