Editor’s note: Keep in mind Turkey has never been able to uphold its end of the bargain and get the non-AQ rebels to break with AQ rebels. Instead, Hayat Tahrir al-Sham has never been more dominant in Idlib. Erdogan doesn’t have a leg to stand on. He does command a big and important state however with which for Russia, under assault by the US-led West, better relations are preferable to poorer relations. However, since Erdogan’s relations with the West are likewise poor it’s not as if he has many alternatives or he wouldn’t be treating with a historic enemy to begin with.

President Recep Tayyip Erdoğan has warned Russia that Turkey was running out of patience regarding the continued offensive by the Syrian army in Idlib and will take unilateral actions to stop it if Moscow fails to persuade Bashar al-Assad’s regime to cease the military operations in the last rebel-held enclave.

“We had some meetings with Russia in Sochi and Astana that produced some agreements [on Idlib]. We will faithfully continue to implement them should Russia stick to the agreements as well. Unfortunately, Russia is not abiding by the deals of Astana and Sochi,” Erdoğan told journalists traveling with him on his return from a three-day Africa tour on Jan. 30.

Informing that talks with the Russian authorities are ongoing on Idlib and the primary message given to them is “Our patience is running thin. We will do whatever necessary if these bombardments do not stop,” Erdoğan stated.

Turkey has shown a strong reaction against the intensified military operations of the Syrian army against the opposition groups inside Idlib which have triggered a new refugee influx towards the Turkish border.

The Syrian army captured the second largest city in Idlib after a massive attack on Jan. 29. Russia and Syria say the offensive was against the radical jihadist groups in the enclave. There are strong criticisms against both nations as they also target civilians in the region.

“If we are loyal partners, then Russia should take up a position. It will either pursue a different track with Syria or with Turkey. There is no other way,” he said.

Turkey and Russia had agreed to establish a de-escalation zone in Idlib through a deal brokered in Sochi. The deal stipulates a ceasefire between the regime and the opposition forces. However, Idlib is also the last stronghold of groups like al-Nusra and Tahrir al-Sham, and the deal does not cover these organizations. [Actually HTS is the largest group by far and exercises hegemony over the others.]

Russia and Syria argue that these groups have expanded their influence in the area and that they were attacking nearby Russian and Syrian military facilities.

“Russians say, ‘We are fighting against terrorists.’ Who are terrorists? Those who are defending their lands? They are insurgents. Are all the four million Syrians in Turkey terrorists too? Where did they come from? They escaped Assad’s cruelty?” he stated.

The real destination should be Geneva, where the U.N. leads inter-Syrian constitutional talks, Erdoğan said, adding the need to accelerate efforts for a political breakthrough in Syria. 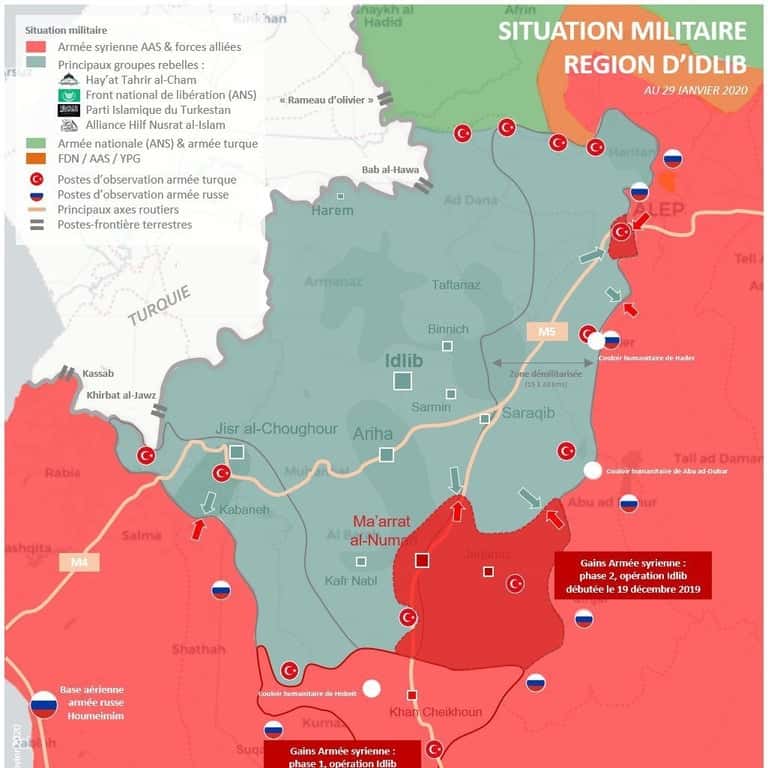 Syrian regime forces on Jan. 28 entered a key rebel-held town in the country’s northwest after surrounding it on three sides, sending thousands of people fleeing to safety in areas farther north, a war monitor and state media said.

Heavy clashes broke out between rebels and government forces in Maarat al-Numan after the forces entered the town south of Idlib city, the Syrian Observatory for Human Rights said, after earlier reporting that the troops backed by Russian air strikes had taken full control.

The town of Maaret al-Numan, which has been in rebel hands since 2012, sits on the highway linking Damascus with Aleppo. Syrian troops were keeping a road leading west out of the town open, apparently to give insurgents a chance to withdraw.

Turkey’s Defense Ministry said Turkish forces would retaliate “in the strongest way, without hesitation” against any attack on its observation posts in Idlib by Assad’s forces.

Turkey, which has a 911-kilometer border with Syria along its southern frontier, has 12 military observation posts in the region [the “region” being Syria’s Idlib], under a deal with Moscow and Tehran in 2017.

The violence came as the U.N. special envoy for Syria, Geir Pedersen, arrived in the capital Damascus to meet with officials. Pedersen is expected to talk during his visit about activating the constitutional committee whose job is to draft a new constitution for the country.

The 150-member committee met in Geneva in October but has failed for make progress.