Englishwoman, 27, Died of Liver Cancer After 5 Months of Attempts to See a Doctor in Person

Like teachers, GPs in socialized health systems have erected a COVID wall against having to work

The mother of a young woman who died from cancer has told MPs her daughter might still be alive if she was seen by her GP face-to-face.

Jessica Brady, 27, from Stevenage in Hertfordshire, passed away from liver cancer in December after a series of virtual appointments over the course of five months failed to spot her tumour.

Her mother, Andrea, told the Health and Social Care Committee today that Jessica was repeatedly denied an in-person appointment after first complaining of abdominal pain last summer, despite the epidemic being largely under control at that point.

She was diagnosed with a kidney infection ‘in the absence of any diagnostic testing or any physical examination at all’ and prescribed with antibiotics.

When she became extremely fatigued and her symptoms worsened, she was only prescribed more antibiotics, steroids, and an inhaler.

One set of blood tests even revealed Jessica had high D-dimer levels, which can be a signal of solid cancers, the mother told MPs.

And subsequent tests identified concerns regarding her liver function – which her mother said makes sense now as she had liver cancer – but medics decided to wait six weeks to see what happened.

Doctors didn’t put ‘the pieces of the jigsaw together’ that it was cancer until five months later, by which point the cancer had spread around Jessica’s body and become untreatable.

It comes as Health Secretary Sajid Javid demanded ‘more GPs should be offering face-to-face access’ and ‘we intend to do a lot more about it’.

Figures show a third fewer people in England are seeing a GP now than before the pandemic and tens of millions of appointments were ‘lost’ during Covid.

Ms Brady revealed that Jessica was only finally seen in person by a GP when she bombarded her local surgery with more than 20 phone calls.

The family doctor told the family that Jessica ‘probably needs a gastroscopy’, her mother told the committee.

If this procedure – which involves a camera taking pictures inside the stomach – happened a few months earlier, her cancer ‘wouldn’t have spread so aggressively’, Ms Brady said.

‘Jess was a very gentle, sweet person, but she really did attribute her late diagnosis to the slow reaction of her GP surgery,’ her mother added.

Even after seeing a GP in-person, it was not until she sought private health care that she was diagnosed with stage four cancer of the lungs, bones, spine and liver.

She went to hospital on the day of her diagnosis and died three and a half weeks later on December 20.

Asked about Jessica’s challenge in getting a GP appointment, she said: ‘It was incredibly challenging for Jess, just navigating the whole system of consult procedures.

‘I think the most important thing is we feel, and Jess felt that no one listened, no one took it seriously and more than anything, she needed a permitted face-to-face appointment really early on, with people making notes.

‘And also, during all that time, she wasn’t seen by one designated doctor, four different doctors spoke to Jess and prescribed her medication. And we think that was really key.

‘No one person was looking at the whole picture and putting the pieces of the jigsaw together. That didn’t happen until two days before Jess received her diagnosis, when I think there was an element of panic, because she was receiving quite a lot of phone calls at that stage, and saying you probably need a gastroscopy.

‘In fairness, if that had happened three months earlier, obviously her cancer would not have spread – well we think it wouldn’t have spread so aggressively by then – so I think it’s fair to say that Jess was a very gentle, sweet person, but she really did attribute her late diagnosis to the slow reaction of her GP surgery.’

Her parents have launched a petition calling for a cancer specialist in every doctor surgery, a dedicated GP for each patient, frequent courses for GPs and a public health campaign on the warning signs of cancer in young people.

Virtual appointments were heavily encouraged throughout the Covid crisis in an attempt to keep social mixing low and hospitals virus-free.

But trusts have continued to incentivise the practice, with GPs being offered bonuses to keep in person attendances low.

There are fears that some people, particularly the elderly, are being left behind.

Recent data from NHS Digital showed 57.2 per cent of appointments in July were conducted face-to-face.

That is higher than the low of 46.8 per cent last April, as the first Covid wave swept across the UK, but much lower than the 80 per cent pre-pandemic figure.

“Virtual appointments were heavily encouraged throughout the Covid crisis in an attempt to keep social mixing low and hospitals virus-free.”

The poor girl died because of lunatics running amuck. There are no longer doctors,,, just corporate zombies with only the bottom line in mind.

The liver can heal itself. What she died from was illiteracy. Read up on how to take care of yourself.

In Canada we only have virtual care mostly, but they way to get help is to go to the emergency, there they are actually very good.

Stupid fucks as everywhere! Idiots who can’t read even the computers they seek some knowledge! Stupid Western goyim!!!

How true and you seem to be a good example of that.

For quite sometime all medical school/colleges have changed the oath of Hippocrates to the oath of Hypocrites ….
I’m old enough to remember the time when medical & teaching profession were seen as very respectable .. Could you say that today ?

Most are excessively specialized charlatans. They cannot see the forest for the trees.
Rockefeller health care at its finest where the mantra is “a pound of cure is better than an ounce of prevention.”

NHS in UK, employing the most stupid ” doctors” from 3rd world, lazy goat herders! And most of these lazy bastards, hide behind Covid in telephone short conversations with patients, they are refusing to treat! Why the stupid public in UK pays their wages!???

They pay because the state puts a gun to their head. Pay or get sent away!

She should have come to Japan.
The medical services still treats you with respect and devotion. And face to face!

All those motherfuckers wearing coats care for one thing ONLY… 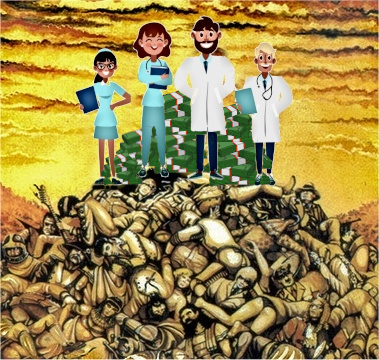