End of Snow? Finland Thinks Their Winter Snow Might Not Melt This Summer

Paleo-climatologists are aware that far from being unusually warm, the world is currently in the grip of the Quaternary Glaciation, a period of unusual cold which has so far lasted 2.6 million years. What we are experiencing right now is the Holocene, a brief respite from the vast ice sheets" 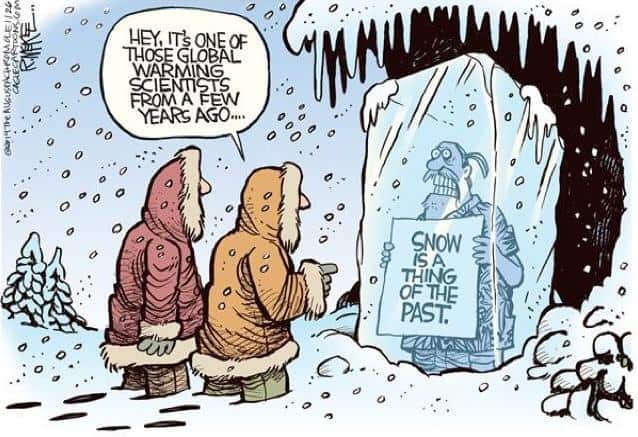 Finland thinks that piles of snow accumulated from road clearing this year are so large, some of the snow will still be frozen when winter returns.

In Finnish capital region, snow piles built up this winter may not melt during summer

THE CAPITAL REGION of Finland has received so much snow this winter that the metres-high piles hauled to designated snow dump areas may not melt during the course of the summer, reports Helsingin Sanomat.

In Uusimaa, for example, the amount of snow was 1.7 times higher than last year in January, according to Foreca.

Helsingin Sanomat on Friday wrote that the piles of snow stand almost as high as 20 metres at the dump area in Herttoniemi, eastern Helsinki. In Maununneva, a north-western neighbourhood of the city, lorries have dumped roughly 16,000 loads of snow at the dump area, revealed Tero Koppinen, a production manager at Helsinki City Construction Services (Stara).

The snow ploughed from roads forms a large structure, nicknamed by the locals as the Alps, also at the only snow dump area in Espoo, in Vanttila.

The Fins mostly seem to be treating this as a joke, maybe a chance to cool off on warm Summer days. And most likely this event will have no long term consequences.

But history teaches that when ice ages strike, they can strike abruptly, with very little warning.

12,800 years ago, the world abruptly froze. Temperatures plunged back to ice age conditions, and stayed cold for over 1000 years.

In 2009, a group of scientists researching high resolution sediment samples from Lough Monreach, an ancient lake in Ireland, claimed the return to ice age conditions might have occurred over a period of less than a year. In the lead researcher’s words, “It would be like taking Ireland today and moving it up to Svalbard, creating icy conditions in a very short period of time”.

There is nothing unusual about ice ages in our current geological epoch. It is the reprieve from cold temperatures which is unusual, not the glaciation. Most of the last 115,000 years the world was locked in a harsh ice age, with vast ice sheets covering Europe and Canada. The Holocene, our current brief respite from extreme glaciation, only stretches back for the last 12,000 years.

While climate alarmists parade their worthless computer models and shriek that the world is overheating, paleo-climatologists are aware that far from being unusually warm, the world is currently in the grip of the Quaternary Glaciation, a period of unusual cold which has so far lasted 2.6 million years. What we are experiencing right now is the Holocene, a brief respite from the vast ice sheets which define much of the Quaternary.

A return to extreme cold is unlikely to happen in our lifetimes. Noteworthy geological scale events rarely happen on a human timeframe. But a return to glaciation at some point in the future is inevitable. Let us hope our descendants maintain the technological and engineering prowess they will need to hold back the ice, when the ice finally returns to challenge our beautiful home.

Source: Watts Up With That?