Now it's a "disgraceful" parliament-storming 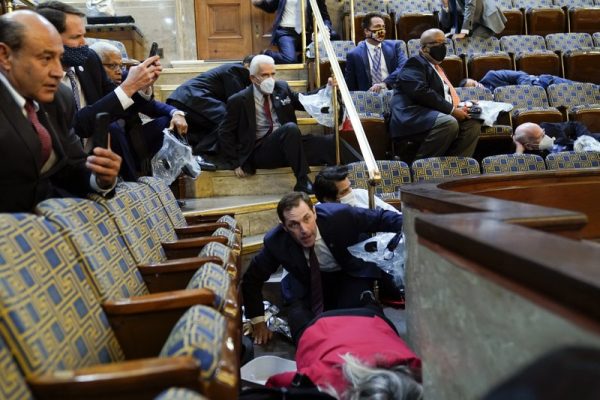 US allies abroad have expressed concern over a riot in the U.S. capital as masses of Donald Trump supporters descended on the Capitol building as the certification of President-elect Joe Biden‘s victory was taking place inside.

Crowds adorned in pro-Trump attire and shouting slogans in support of the incumbent U.S. leader defied security forces and broke into the Capitol during the joint session Wednesday in which lawmakers were debating Republican objections to Biden’s election. Chaos ensued resulting in armed standoffs, the shooting of at least one woman and clashes between protesters and police both in and outside the building that hosts the U.S. Congress.

As the violent scenes played out in Washington, D.C., allies of the United States, especially members of the NATO Western military alliance, watched from afar and conveyed their calls for calm and stability.

Canadian Prime Minister Justin Trudeau voiced his opinion during a radio interview with News 1130 in Vancouver.

“Obviously we’re concerned and we’re following the situation minute by minute as it unfolds,” he said. “I think the American democratic institutions are strong and hopefully everything will return to normal shortly. We’re going to continue to do what we need to do to make sure that Canadians are well-served in our relationship with the United States, regardless of how things unfold.”

EU High Representative Foreign Affairs and Security Policy Josep Borrell said the acts of violence against the U.S. election did not represent the country as he knew it.

“In the eyes of the world, American democracy tonight appears under siege. This is an unseen assault on US democracy, its institutions and the rule of law. This is not America. The election results of 3 November must be fully respected.

“I commend the words of President-elect @JoeBiden,” he added. “The strength of US democracy will prevail over extremist individuals.”

French Foreign Minister Jean-Yves Le Drian noted the gravity of the situation and denounced the demonstrators.

“Violence against American institutions is a serious attack on democracy. I condemn them,” Le Drian tweeted. “The will and vote of the American people must be respected.”

Germany’s top diplomat took to Twitter to denounce the demonstrations, which Trump had previously called for and now has urged supporters to end.

German Foreign Minister Heiko Maas said the unrest was a victory for anti-democratic forces, and compared the situation to the rise of Nazism in Germany.

“The enemies of democracy will rejoice at these incomprehensible images from #WashingtonDC,” German Foreign Minister Heiko Maas tweeted. “Inflammatory words turn to violent action—on the steps of the Reichstag, and now in the #Capitol. The disdain for democratic institutions is devastating.”

.@SpeakerPelosi once referred to the Hong Kong riots as "a beautiful sight to behold" — it remains yet to be seen whether she will say the same about the recent developments in Capitol Hill. pic.twitter.com/91iXDzYpcO

Greek Prime Minister Kyriakos Mitsotakis said he was disturbed by the violent disorder, hoping peaceful rule of law would soon be restored.

“Extremely troubled by the violence and horrible events taking place in Washington D.C. American democracy is resilient, deeply rooted and will overcome this crisis,” Mitsotakis tweeted.

The Irish premier issued a statement channeling close ties between the countries and their peoples, conveying concern over the ongoing situation.

“The Irish people have a deep connection with the United States of America, built up over many generations,” Irish Prime Minister Micheál Martin tweeted. “I know that many, like me, will be watching the scenes unfolding in Washington DC with great concern and dismay.” [Non-NATO Ireland with the least partisan message.]

“What is happening in Washington in these hours is very serious. A real disgrace to democracy, an attack on the freedoms of the American people,” Di Maio tweeted. “We strongly condemn all forms of violence, in the hope that there will be an orderly and peaceful transfer of power as soon as possible.”

The Norwegian head of the U.S.-led 30-member NATO coalition issued a statement of its own over the riot.

“Shocking scenes in Washington, D.C.,” NATO Secretary-General Jens Stoltenberg tweeted. “The outcome of this democratic election must be respected.”

The tweet was also shared by NATO spokesperson Oana Lungescu.

“What is currently taking place in Washington DC is deeply disturbing and serious, and a completely unacceptable attack on democracy,” Søreide wrote in a statement. “President Trump has a special responsibility to make sure the situation comes under control.”

She also called on U.S. legislators to act as well in order to preserve the country’s democratic process.

“Congress needs to complete the tasks the constitution imposes on them,” Søreide added. “It is absolutely fundamental in a democracy that the losing party acknowledges the election defeat.”

The Portuguese Foreign Ministry expressed confidence that Biden’s transition would take place in spite of the events.

“We express our deep concern with today’s events in Washington, and are confident that American democracy, the respect for the institutions and the rule of law will prevail,” the ministry said in a statement. “We trust the US and its institutions to ensure a peaceful transfer of power to the Biden administration.”

A number of Spanish officials released statements supporting Biden’s transition among the chaos.

“I am following with concern the news that is coming from Capitol Hill in Washington,” Spanish Prime Minister Pedro Sánchez tweeted. “I trust in the strength of America’s democracy. The new Presidency of @JoeBiden will overcome this time of tension, uniting the American people.”

“#Washington DCdemocracy rests on a peaceful transfer of power: when you lose you must accept defeat,” Spanish Foreign Minister Arancha González tweeted. “Full trust in Senators and Representatives to take forward the will of the American people. Full trust in President elect @JoeBiden.”

Swedish Foreign Minister Ann Linde described the ongoing events in the U.S. capital as an assault on the democratic system, for which she said Trump must stand up.

“Deeply concerned by developments in Washington DC. Witnessing an attack on democracy,” she tweeted. “The democratic process must be respected and order peacefully restored. US democracy is strong. President Trump has responsibility to stand up for the democratic process.”

The head of the Turkish parliament urged those involved in the riotous events to deescalate.

“We follow the events in the USA with concern and invite the parties to calmness,” Turkish Grand National Assembly Speaker Mustafa Sentop tweeted. “We believe that problems will always be solved within law and democracy. As Turkey, we have always been in favor of the law and democracy and we recommend it to everyone.”

The country underwent an attempted coup in July 2016 when an apparent group of rogue military officers calling themselves the Peace at Home Council sought to overthrow President Recep Tayyip Erdogan. Armed clashes broke out and government buildings including the parliament building and presidential palace were bombed, killing hundreds. Thousands were imprisoned after the attempted coup.

“Disgraceful scenes in U.S. Congress,” Johnson tweeted. “The United States stands for democracy around the world and it is now vital that there should be a peaceful and orderly transfer of power.”