Door-to-door teams armed with Covid jabs will be sent to the homes of unvaccinated Britons in plans being considered by Ministers to reach the estimated five million people yet to be inoculated.

Discussions between the Department of Health, NHS England and No 10 over the past week have looked at a nationwide drive to send vaccine teams to areas with low uptake rates as a crucial way to avoid lockdown and other restrictions.

It is also seen as a way to get jabs to rural areas or households where people cannot easily get to a vaccination centre.

One Cabinet Minister last night backed the plan, saying: ‘I think anything that encourages the vaccine-hesitant is sensible,’ before warning: ‘The mood in the country is hardening against people who refuse to be vaccinated.

This comes as SAGE warned the UK is about to be hit by a large wave of Covid hospitalisations and the peak could be even higher than last winter despite the reduced severity of Omicron.

In minutes from a meeting on December 23 published last night, the Government’s Scientific Advisory Group for Emergencies warned that the peak on hospital admissions ‘may be comparable to or higher than previous peaks’ – including the second wave in January.

Door-to-door jabs visits are already being trialled in one area of Ipswich, which led to an extra 150 people getting their first, second or booster jab in a weekend.

Downing Street sources said the aim is to expand this to the rest of the country and try to reach the estimated five milllion unvaccinated.

Dan Poulter, the Tory MP and NHS hospital doctor who has been doing shifts in London hospitals, welcomed the plan. He said: ‘In parts of London where there’s very low vaccine uptake, you’re bound to get a good uptake in jabs if you’re knocking on doors.

‘I think that would have a very positive effect in getting vaccination rates higher.’

Good they’ve disarmed the population. I would be hesitant to try something that stupid in the US.

You don’t need guns to win this just people. Also we have a lot of guns in the Uk a lot
1.3 mil shot guns and 550k others (Registered that is)

Last edited 18 days ago by will
6
Reply

True dat! But if the people are armed and known to use them once in awhile, the despots might be a little more courteous and willing to listen.

The US for instance. I personally think most of the Rambo’s are just all mouth but one cannot be sure. Therefore one must tread lightly. It’s the unknown factor that keeps them at bay. They know ropes are waiting for them….

I am not a history buff but I don’t think to many tyrants lived to a ripe old age.

In Australia they do.

If you only select the deer hunters from Wisconsin and give them uniforms and make them an army, it would make the 5th largest army on the globe.

I bought a Browning x bolt .300 winchester magnum with a 3- 9 variable scope just for this reason,will i have the balls to use it on these poison jabbers,WELL,they will have to find that out on their own.

I only need a pint glass of petrol in one hand and a lighter in the other when I answer the door. Then I will put the fire out with a baseball bat.

Those two monkeys ,Total added IQ will be about 20 ? 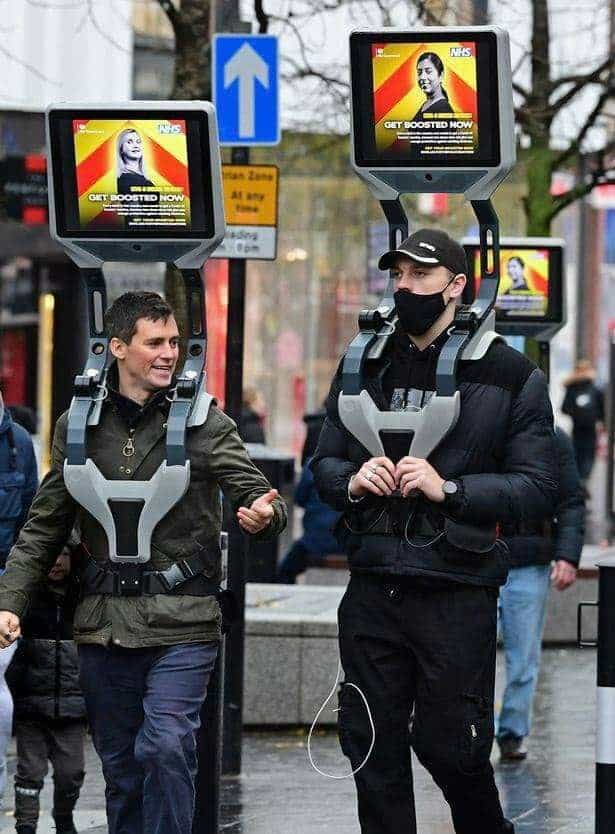 Wow! Are you being kind!!

You can’t reach the ones on top until you take out those like the two in the picture.

If you refuse to identify your enemy the you have lost already.

Do these operatives also have people go round the back do so people cant escape. I mean what about if they come across people who have said they wouldn’t get one in a million years.

No,,, They use those with even a lower IQ to do that…. cops.

Vaccination squads showing up at my home in rural Mississippi will be met with armed resistance. Five of us can shoot and won’t hesitate to fire on any Fauci/Gates/Schwab/Soros/Biden/UN – dispatched death-jab squads who refuse to leave my property. It’s just that simple.

Yupp… Praise the Lord, but keep the powder dry & your AR-15 or AK-47 loaded with hollow points ammo !

You need to be ready to fire at cops, dogooder women and all the other minions before you will ever have a chance at those you mentioned.

And I just don’t see that happening.

Zionist mafia wants all your money

Get the Ouch Witz app today…as seen on Teeee Veeee.

Planet Sheeple truly deserves to be pulverized by a mountain sized metero…yesterday already.

Onward down the sewer

“Once the herd accepts mandatory vaccinations, It’s
GAME OVER. They will accept anything – Forcible blood or organ donation-
“For the greater good”. We can genetically modify children and
sterilize them- “For the greater good”. Control sheep minds and you
control the herd. Vaccine makers stand to make billions. And many of you in
this room are investors. It’s a BIG win/win. We thin out the herd, and the herd
pays us for extermination services”

Henry Kissinger
Enjoy the apocalypse or get off your knees already

This is the first time in history that the ineffectiveness of a medicine is blamed on the people who didn’t take it.

surely that picture is fake?

TO LEADERS OF “THE MOTHER COUNTRY” :

STOP THIS NONSENSE OR WE WILL INVADE YOU AND END YOUR COLORFUL REIGN OVER THE WORLD FOREVER……WE WILL EXCISE YOU….POOOF.
NO MORE LITTLE BOYS BUTTS FOR YOU…..

If a population is so cowardly that they will not say, “NO !” they are certainly too cowardly to resist with violence. Having a gun is nothing without having the courage to pull the trigger.