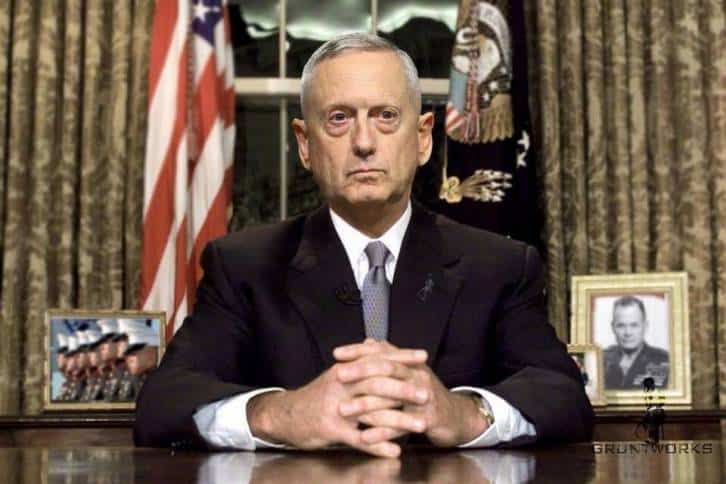 Trump now says that either during the 2017 or the 2018 US strikes against Syrian government targets (to avenge an Al-Qaeda-staged phony “chemical attack”) he wanted for those strikes to kill Assad, but was talked out of it by Mattis:

As part of a lengthy diatribe against former Secretary of Defense James Mattis, President Donald Trump said Tuesday that he wanted to order an assassination against Syrian President Bashar al-Assad in 2017 [Actually Trump did not say it was in 2017, that is conjecture by Forbes. It is likelier it was during the 2018 strikes.], but that Mattis “was against it,” which contradicts previous statements made by Trump.

“I would’ve rather taken him out,” Trump said of Assad during an interview with Fox and Friends Tuesday morning. “I had him all set. Mattis didn’t want to do it. Mattis was a highly overrated general.”

That Trump wanted to go so far as to kill Assad is new, but to someone paying close attention at the time it was very clear that the 2018 strikes were not as extensive as what Trump initially had in mind. And that the military men who did not want to risk a clash with the Russians were responsible for that.

Russia vows to shoot down any and all missiles fired at Syria. Get ready Russia, because they will be coming, nice and new and “smart!” You shouldn’t be partners with a Gas Killing Animal who kills his people and enjoys it!

President Trump even suggested that the US might take measures against Russia over the attack, as other administration officials try to blame the Russians for the attack. Trump told reporters that Russia, Syria, and Iran may all “pay a price,” and that the US will ensure “everybody will.”

Commenting on this at the time, I actually took to calling Mattis “President Mattis”, it was that apparent (to a close observer) it was he who had stopped Trump and then brought him around.

The actual strikes that then followed were then closely choreographed with Russia to ensure everyone could save face, and avoid cause for further escalation:

Out With a Whimper: Trump Blinks, Delivers Limited Strikes

120 cruise missiles have been fired at three sites and it’s over. In other words, the sweeping, sustained strikes Trump wanted initially did not happen. President Mattis prevailed and the Russian warning they would fire back if put at risk was taken seriously.

So things took the turn I also thought was the most likely. Trump carried out his promise he would attack Syria but kept his strike limited enough that Russians weren’t at risk and the damage to the Syrian war effort will be practically nil.

Also there are indications to believe the strikes were heavily “de-conflicted” with the Russians:

Chief of Staff Dunford says the Russians were not pre-notified of the strikes and target locations, but that likely just means it was handled differently this time. It seems there was no need to inform the Russians because unlike in 2017 the Pentagon limited itself to sites where Russian troops wouldn’t be present anyway. Dunford spoke of hitting a “research facility” and a “chemical weapons storage facility”. It isn’t clear if any military base was hit, it seems not.

The Russian Ministry of Defense claims Russian air defenses were not involved in repelling the attack. If true that is as much as a confirmation that there was some kind of American-Russian understanding in place for the rules of the strike beforehand. Otherwise there is no reason at all for the Russians not to at least use passive counter-measures (electronic interference). Perhaps the Americans assured the Russians no military bases would be hit and they would be coming for only a few sites anyway, but in return asked the Russians not to interfere with their attack. Actually that is the most likely explanation given everything we know so far.

In any case, this was the limited strike taking into account the strongest objection of the Russians that Mattis wanted, and not the insanity Bolton wanted and Trump as well early on.

Now that the (former?) reality TV star has saved face, arranged for some funerals and weeping mothers in a far-away land he is utterly ignorant of and deluded about, the Syrians are now free again to bury their dead and go back to the business of putting their nation back together — until the next western media hysteria over a staged atrocity with good Youtube footage courtesy of UK-funded shysters at Al-Qaeda Productions.

If you want the whole saga:

The reality is that there is no simple morality tale of deep state war criminals and military-industrial complex scoundrels on one side, and of MAGA Trump on the other.

Yes, on some things Trump can, on a good day, be an improvement over them. Yet at other times he is actually worse than they are.

And vice-versa, Mattis saved the day on 2018 Syria strikes, but that did not prevent him from finally breaking with Trump over, of all things, Trump’s entirely correct instinct to leave Afghanistan and Syria for good (which he then never did). One irony is that Trump, the “peace candidate” of 2016, could not even consistently stay less warlike than the “Mad Dog” who had razed Fallujah for Bush in 2004.

The other is that things went so far in the “MAGA” White House it fell upon a war criminal and a General Dynamics man to save us from a Russian-American clash of arms (with all its potential to snowball into more).

Our Benevolent EmpireWar in Syria
3 Comments
Leave A Reply
Cancel Reply
Read the rules before you think about commenting
Telegram Group
AE has a supporting readers Telegram group where we hang out and exchange leads and takes. If you have ever donated to AE drop me a line on email and I'll send you the link to join.