Alarm, fear, panic, hysteria, dread are loose in Washington DC. Here are sample headlines which sum up why our lawmakers have emptied the shelves of smelling salts in the local apothecaries:

AND WE CAN’T WIN A WAR WITH THESE TWO BACKWARD, UPSTART NATIONS?

What’s the explanation? We’ve got the best-equipped, most powerful military money can buy. We’ve got the largest navy, the most submarines, the largest air force, the most tanks and artillery. We have over 800 bases around the world. And we can’t win a war against Russia or China?

It seems that the peddlers of this paranoiac prattle, aka pitchmen for the MIC and all who profit from promoting war, left out two words.

That’s right we can’t win a war OF AGGRESSION against China or Russia.

What’s left out of the sales pitch for more astronomical increases in our defense spending is some simple straightforward talk, which would undercut the whole argument for more military might.

You see, neither China or Russia can win a war of aggression against the U.S. or Europe either. Somehow that didn’t get mentioned. So the truth is, right now we are at parity with these countries. We can’t win attacking them. They can’t win attacking us.

I would think this would be a cause for celebration. But that’s just me … and maybe 300 million other sane people in this country. 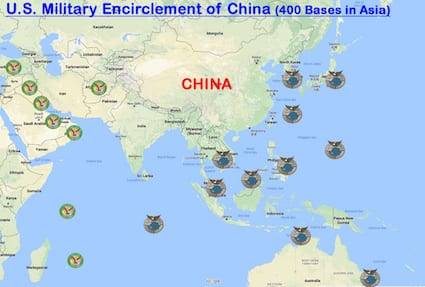 The difference is that neither China or Russia are trying to build some colossal offensive war machine. The major thrust of the defense spending for both of those countries is to DEFEND AGAINST a war of aggression. That’s where they put their money. And it takes a lot less money to defend a homeland, than to prepare to attack another country. Or to police an empire that stretches across the entire planet. A lot less!

That’s not to say that Russia and China don’t have offensive weapons. They do. But they deploy those weapons in a defensive posture. There are two ways to defend a country. Either you go head-to-head with an invading force, which would not just include soldiers, tanks, artillery, but also anti-ballistic missile systems, electronic warfare (incapacitating the high-tech weaponry of the attacking force), whatever mechanisms, some very destructive and lethal, are needed to keep the invaders at bay.

Creating weaponry for those two purposes, that is, to defeat an invading military force or to discourage an aggressive attack, is predominantly what Russia’s and China’s military R&D and asset deployment has excelled at. This type of weaponry is much less expensive. Which explains in very simple terms why they can have such effective militaries at a fraction of the cost.

The handwringing, cold sweats, hyperventilation, allegedly caused by our WAR WINNING GAP — remember the missile gap of the 70s and 80s — are symptoms of the insanity which has infected both major political parties, destroyed any perspective and common sense, made completely impossible any rational conversation about the role our military should play in the world, and especially voided any discussion of how much of our nation’s resources should be diverted away from constructive social programs — including but not limited to quality universal education, investment in sustainable productive infrastructure, quality universal health care, and getting serious about addressing the climate crisis — to support the grand imperial project of world domination with even more military expansion.

Right now, no one can win a war of aggression. In all probability, considering the dismal record of our military since WWII, no matter how much the U.S. spends, it will NEVER BE ABLE TO WIN A WAR OF AGGRESSION. If we keep pushing for war, as they say, be careful what you wish for. Because neither Russia or China will back down. The risks of a major confrontation with either going nuclear are very high.

Don’t forget those two words: ‘of aggression’. Because when the lunatics now in power talk about our diminishing military capacity, they are referring to our decreasing ability to mount an armada and take on Russia and China OVER THERE, not HERE — that is, winning a war in “their immediate sphere of influence”.

If you have any doubts about what I’m saying, just check any map of foreign deployed military bases and track where the war games are taking place. 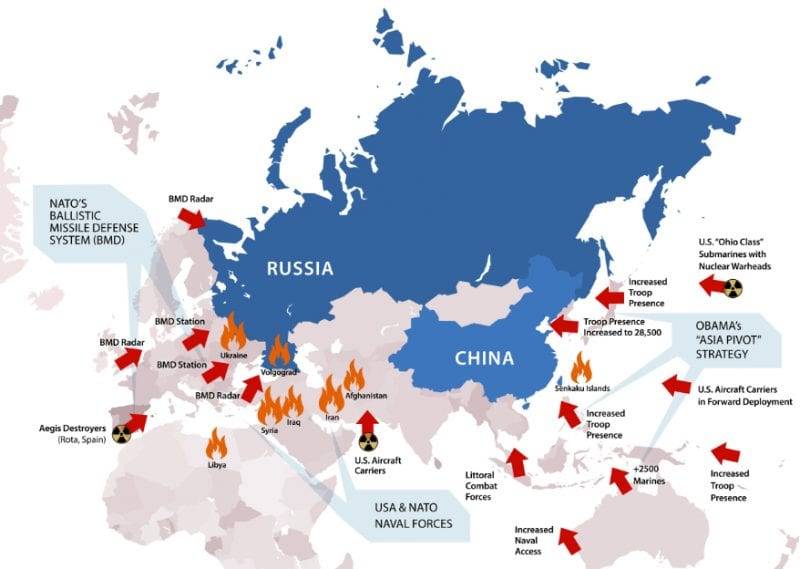 The Chinese Navy is not doing “freedom of navigation” exercises in the Caribbean or off the coast of New England or California. Russia and/or China are not conducting huge war games in Canada or Mexico. There are NO Chinese or Russian bases anywhere in our hemisphere. Moreover, while both Russia and China have conducted large-scale war games — important to note these are exercises in defending against large scale attacks from an aggressor — they on held in Russia and in China, not in bordering countries, and certainly not thousands of miles away in “our immediate sphere of influence”.

Let’s hope they never have to fight such a war. We must relentlessly work toward removing the lunatics now in power in the Washington DC bubble — more resembling an insane asylum with each passing day — who apparently are preparing to launch such a war OF AGGRESSION against Russia, and another against China.

In summary, the military analysts are correct in saying, we can’t win such a war now. But they can double, triple, quadruple the defense budget, and it will accomplish nothing. No amount of destructive weapons will ever produce a winner in such a conflict. An attack on either Russia or China could very well go nuclear, in which case there will be no winners. There will be no one around period to plant flags or declare victory.