Crickets From the Media as Hillary Loses Appeal, Ordered to Testify on Private Email Server

"She's desperate to stop this questioning...because no one has asked her questions like this before"

Amid the chaos and anarchy across blue-city America that exclusively possessed public attention for the last couple of weeks, it was not hard to miss any other bit of news — especially if that news has not appeared or been even briefly mentioned by any major mainstream media outlet.  Take for example the news of Hillary Clinton, who lost her appeal in the United States Court of Appeals for the D.C. Circuit on June 2, where she tried to avoid testifying under oath about her emails and the Benghazi case.

The hearing in the D.C. Circuit came in the case Judicial Watch v. Clinton, a public records case involving a request for State Department documents and communication about the 2012 terror attack at the U.S. mission in Benghazi, Libya.  U.S. Ambassador J. Christopher Stevens and three other Americans were killed in the attack.

The case also involves Clinton’s use of a private email server as secretary of state.  Judicial Watch, a conservative activist watchdog group that files Freedom of Information Act lawsuits to investigate claimed misconduct by government officials, uncovered another 756 pages of emails the FBI was able to retrieve that were part of Hillary Clinton’s unsecured server revealing communications between some prominent Washington figures and classified emails sent by former prime minister of the United Kingdom Tony Blair.  The emails were part of the batch “Clinton tried to delete or destroy,” Judicial Watch stated in its press release.  It showed that Clinton had asked Blair to continue using her private email after her confirmation and also revealed that Blair was sending classified information on her unsecured server.  Clinton had been “extremely careless” in her handling of classified information, as ex–FBI director James Comey carefully and rather mildly concluded in July 2016, announcing there would be no charges against her.  Judicial Watch did not drop the case.

P.5: “The Court is not confident that State currently possesses every Clinton email recovered by the FBI; even years after the FBI investigation, the slow trickle of new emails has yet to be explained. For this reason, the Court believes the subpoena would be worthwhile and may even uncover additional previously undisclosed emails. Accordingly, the Court GRANTS this request.”

P. 10: “The Court GRANTS Judicial Watch’s request to depose Secretary Clinton on matters concerning her reasons for using a private server and her understanding of State’s records management obligations.”

P. 10–11: “The Court holds that Secretary Clinton and Ms. Mills [Counselor and Chief of Staff to Hillary Clinton during her whole tenure as United States Secretary of State] cannot be questioned about the underlying actions taken after the Benghazi attack, but they may be questioned about their knowledge of the existence of any emails, documents, or text messages related to the Benghazi attack. Such inquiries would go to the adequacy of the search without expanding the parameters…Accordingly, the Court GRANTS IN PART AND DENIES IN PART this request.”

Clinton had argued that she shouldn’t be required to testify because she was a former high-level government official and that the FBI already tried to retrieve her emails.  Clinton’s lawyers even mentioned some “indisputable right” allowing her not to appear in court, according to Judicial Watch.  Tom Fitton, Judicial Watch president, said Clinton’s lawyers’ petition practically states that “she’s too important to have to testify to us.”  “She’s desperate to stop this questioning by Judicial Watch because no one has asked her questions like this before[.] … We know what the issues are, and the court wants specific questions answered, but now she’s seeking this extraordinary emergency intervention to stop us.”

Judicial Watch wants to know about the Benghazi talking points — when senior Obama administration officials knowingly misled the country about what had happened by heavily scrubbing the CIA’s talking points regarding terror references on the eve of the 2012 presidential election.  They would want to ask her why she deleted 33,000 emails from her private server and what information they contained — because despite her claims that they were “personal,” the FBI recovered more than 17,000 of them that were work-related.  Did they contain any classified information?  Did they contain human intel?  Did she know about the upcoming terrorist attack?  What measures did she use to prevent the Benghazi attack?  What measures did she use to save the American lives?  And many, many more.

And now, despite all the effort to avoid testimony, Madam Secretary will have to answer questions from Judicial Watch, as the D.C. Circuit Court of Appeals submitted the case, which will now be heard on September 9.  Stock up on your popcorn, America.

Go get her JW! if you can. Trump declaring he would see Hillary in prison was just a campaign ruse.. pretty much like his entire list of promises during his very energetic campaign.. Even on 911 inquiries. He and his people have been hiding and obstructing on these issues from day 1. Trump made clowns of his opponents and we loved it! But don’t fall for it again. If you watched his recent West Point speech he went over all his campaign talking points about pointless wars, needless regime change operations, respecting our military and not sending them around to be the world police.. Bring the boys home! It’s just Trump campaign 2.0.. He’s a dangerous liar carrying on the criminal enterprises of Obama, Bush and others.. 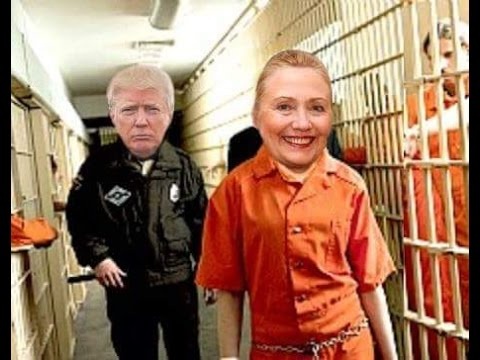 I suspect that the concept ‘deep state’ refers to the collusion that is typically ignored –between unintelligence agencies, immoral war criminal politicians and the corporations that effectively decide govt policy and legislation

hope Tom goes for her throat!

What ?? She sold humintel id’s to the highest bidder ?

And why did Legal Watch have to do this? Because the F.B.I. under James Comey failed to do an honest and thorough investigation when they had the opportunity to do so back in July 2016. I’m sure the “tarmac” meeting between Loretta Lynch and Bill Clinton at the Phoenix Airport on June 28, 2016 had a huge influence on Comey’s actions, or more correctly his inaction.

In any event, a lot of people have a lot to lose if Trump is re-elected in November. This is why the Clinton/Obama/Soros/Deep State/MSM criminal cabal wants Trump removed from office. The Mueller investigation failed. The impeachment proceedings in Congress failed. Now they’ve become so desperate, they’re backing a BLM/ANTIFA revolution! But this too will fail. The American people won’t allow it. By the time November rolls around, the only thing they’ll have left will be outright election fraud. Or maybe assassination. Don’t put anything past them. They are that desperate.

It is beginning to look like Judicial Watch will be the catalyst that will fulfill the Trump promise to jail Hillary. If they succeed, they will deserve the outcome of the avalanche of donations they will garner to fund the completion of the American political Nuremberg trials.

Lordie, September 9th???!!! This is just beyond the beyond. I’ll be dead by the time justice is ever done.

a lot will happen before September…..by that time the whole country should be plunged into an economic nightmare…..riots…..cities burning…..assassination….food shortages….reemerging plandemic ….maybe even a world war…..so NO the idea she will ever be compelled to testify is but a “pipe dream”….

Another opportunity for HRC to demonstrate her towering intellect.

Commonly known as selective hearing, memory and blindness that was ..

Judicial Watch will only ask relatively harmless questions. He won’t delve into the degenerate sex questions involving her aide, or Wiener’s selling of communications from her server to the highest bidder (Israel got their’s free) and splitting the proceeds with Hillary. Never mind the 40+ murders she is associated with. You know, I better watch my back too.

Thanks to Judicial Watch, we may get some answers, do nothing AG Barr should be ashamed of himself. Trump should fired him and nominate Tom Fitton for AG

The Evil Queen is still working her evil spells

She may in fact be a real EVIL WITCH – they do exist.

You may be closer to “the mark” than you think.

“Popcorn”…. No Thanks
I have better things to do with my Life
I’ll give the idiotic Kangaroo Kourt silliness a miss.
It WAS slightly entertaining a few years ago, but has become “old hat”
Make no mistake… ‘Shillary Killary” will NEVER, repeat NEVER see the inside of ANY jail, and I highly doubt ANY court.
“It” might be involved in some sideshow court case, for the masses, but that is it.
“Shillary Killary” is a “Made Man”. “She” has been a disgusting criminal since the 1980’s.
The Age of Demonic Insanity continues unabated.