The cringilly named "Sputnik V" is also cheaper and easier to store. The EU having botched its own vaccine rollout is interested 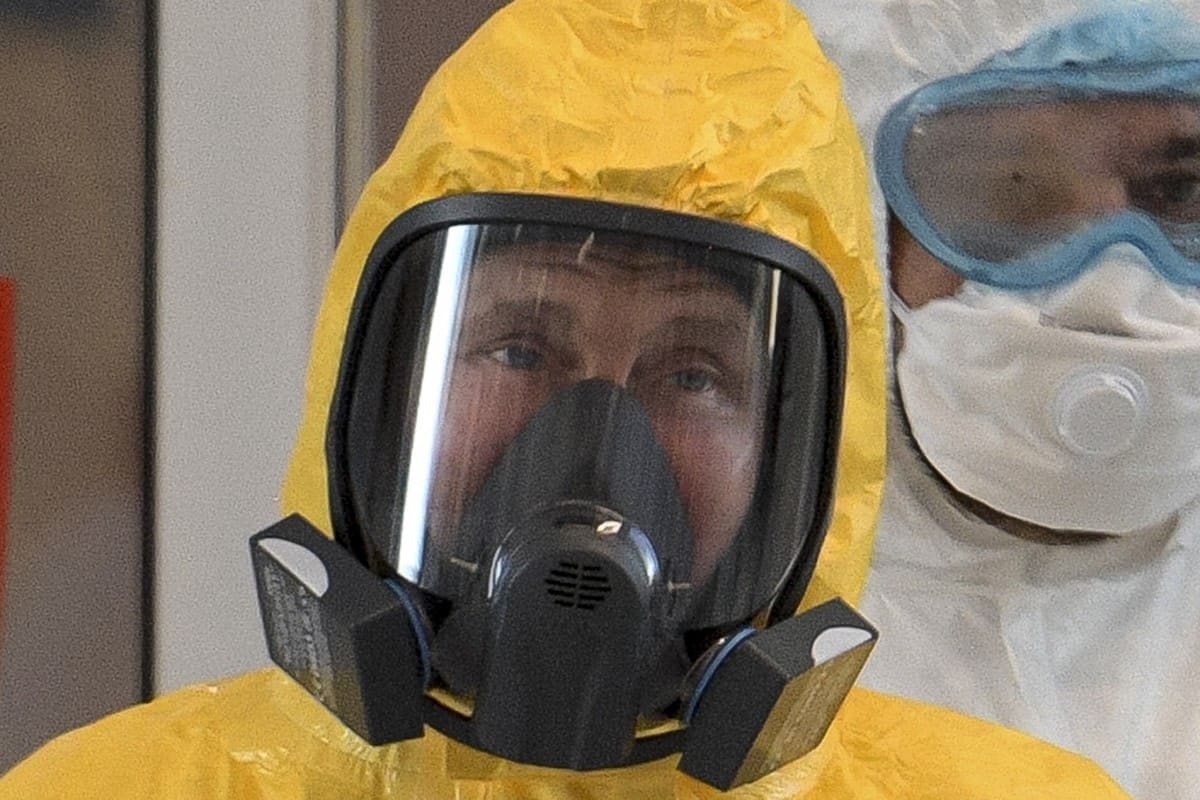 President Vladimir Putin’s announcement in August that Russia had cleared the world’s first Covid-19 vaccine for use before it even completed safety trials sparked skepticism worldwide. Now he may reap diplomatic dividends as Russia basks in arguably its biggest scientific breakthrough since the Soviet era.

Countries are lining up for supplies of Sputnik V after peer-reviewed results published in The Lancet medical journal this week showed the Russian vaccine protects against the deadly virus about as well as U.S. and European shots, and far more effectively than Chinese rivals.

At least 20 countries have approved the inoculation for use, including European Union member-state Hungary, while key markets such as Brazil and India are close to authorizing it.

Now Russia is setting its sights on the prized EU market as the bloc struggles with its vaccination program amid supply shortages.

In the global battle to defeat a pandemic that’s claimed 2.3 million lives in little more than a year, the race to obtain vaccines has assumed geopolitical significance as governments seek to emerge from the huge social and economic damage caused by lockdowns imposed to limit the spread of the virus. That’s giving Russia an edge as one of a handful of countries where scientists have produced an effective defense.

Its decision to name Sputnik V after the world’s first satellite whose 1957 launch gave the Soviet Union a stunning triumph against the U.S. to start the space race only underlined the scale of the significance Moscow attached to the achievement. Results from the late-stage trials of 20,000 participants reviewed in The Lancet showed that the vaccine has a 91.6% success rate.

“This is a watershed moment for us,” Kirill Dmitriev, chief executive officer of the state-run Russian Direct Investment Fund, which backed Sputnik V’s development and is in charge of its international roll-out, said in an interview.

While it’s too early to gauge the political gains for Putin, Russia’s already making much of the soft-power impact of the vaccine on its image after years of international condemnation over election meddling and targeting of political opponents at home and abroad. State television reports extensively on deliveries to other nations.

Sputnik’s success won’t change hostility toward Putin among Western governments, though it could strengthen Russia’s geopolitical clout in regions such as Latin America, according to Oksana Antonenko, a director at Control Risks consultancy.

“With this vaccine, it’s proven itself capable of producing something new that’s in demand around the world,” she said.

Production constraints are the biggest challenge facing all manufacturers as global demand far outpaces supply. Russia, pledging free shots for its 146 million population, began output last year and the vaccine is currently being manufactured in countries including India, South Korea and Brazil.

This week, it emerged a close ally of Turkish President Recep Tayyip Erdogan signed an agreement to produce Sputnik V in Turkey, even as the nation has deals to buy 50 million doses of China’s Sinovac Biotech Ltd.’s CoronaVac vaccine and 4.5 million doses of the Pfizer Inc.-BioNTech SE shot.

Despite Russia’s success, domestic demand remains lukewarm so far, driven by public suspicion of the authorities. Putin, 68, fueled the skepticism in December when he said he was waiting to get the inoculation until it had been cleared for people his age. 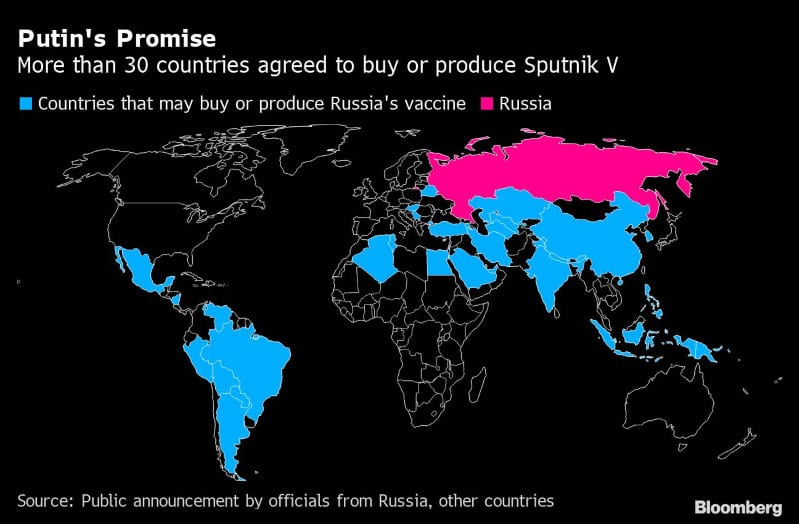 Latin America is proving fertile territory. Argentina, which has struggled to obtain vaccine supplies, started its mass inoculation program after taking delivery of more than half a million Sputnik V doses by January. It’s been joined by Nicaragua, Paraguay and Venezuela. In Brazil, the region’s biggest market, a decision announced Feb. 3 to scrap the requirement for phase three trials for emergency use may speed up approval.

Guinea became the first African nation to start dispensing Sputnik V in December with Moscow-friendly President Alpha Conde and several ministers taking the vaccine. It expects to get 1.6 million doses this year and is also in talks on acquiring Chinese vaccines, along with AstraZeneca Plc’s shot. Zimbabwe, the Central African Republic and Ivory Coast are among other potential customers for Russia.

“We’re not in a position where we can say no to any vaccine. We’ve opted for the Pfizer vaccine, but we’re looking at other vaccines as well,” said Professor Joseph Benie, head of the National Institute of Public Hygiene in Abidjan, Ivory Coast. “There’s an urgency now to start inoculating.”

Sputnik V uses a platform based on the adenovirus, which causes the common cold, and has been studied in vaccine development for decades, though its effectiveness is yet to be proven. AstroZeneca’s is similar, while drugs developed by Moderna and Pfizer and BioNTech rely on a new technology, which uses genetic instructions in a nucleic acid molecule called mRNA to program a person’s cells to make the viral protein itself, triggering an immune response.

Unlike the Pfizer/BioNTech vaccine, Sputnik V can be stored in a fridge rather than a freezer, making it easier to transport and distribute in poorer and hotter countries. At around $20 for a two-shot vaccination, it’s also cheaper than most Western alternatives. While more expensive than AstraZeneca, the Russian inoculation has shown higher efficacy than the U.K. vaccine.

For some nations such as Iran, which received the first batch of a promised 2 million doses this week, Russia offers a more palatable political alternative than Western suppliers. But Russia is also making inroads into countries such as the United Arab Emirates, which is traditionally close to the U.S. and has approved Sputnik V for use.

China, whose inoculations are as low as 50% effective in the case of Sinovac Biotech, retains a lead in Asia. Only a handful of countries have opted for Sputnik V, including the Philippines, which is in talks for 25 million doses.

Chinese developers may now team up with Russia. The RDIF struck a preliminary deal to test a combined regimen of shots from Sputnik V and China’s CanSino Biologics to boost effectiveness against Covid-19, people with knowledge of the matter said Friday.

In what could represent the Kremlin’s biggest potential breakthrough, Russia has asked European regulators to examine a request for authorization of Sputnik V after Germany promised to help expedite the process. With top EU officials still smarting over a sluggish vaccine roll-out, German Chancellor Angela Merkel said Tuesday the Russian shot could be used to protect people in the 27-member bloc as long as it was approved by the European Medicines Agency.

France’s industry minister said she’s “agnostic” when it comes to approving the Russian vaccine. “Any vaccine that’s ready and that presents the safety and efficacy conditions is welcome in Europe,” Agnes Pannier-Runacher said during an interview on France Info TV on Sunday. “We have an interest in having the maximum of different vaccines and volumes.”

Hungary has already granted emergency approval, signing a deal for 2 million doses of Sputnik V with the first 40,000 shots delivered Tuesday. “The vaccine cannot be a political question,” Prime Minister Viktor Orban told state radio Jan. 29. “One can only choose between western and eastern vaccines when you have enough.”

European approval may take several months because of the need to submit detailed data, The Lancet’s Editor-in-Chief Richard Horton told Bloomberg’s QuickTake. “I do think this Russian vaccine will come on tap,” but “not quickly,” he said.

While Russia says it expects the vaccine to be available to 700 million people this year, it’s facing production bottlenecks. “We have to be realistic. Given our other commitments, we will not be able to supply to Europe before May, other than Hungary,” said RDIF’s Dmitriev.

“It’s good news for the whole mankind,” Borrell said. “It means that we are going to have more tools to face the pandemic.”