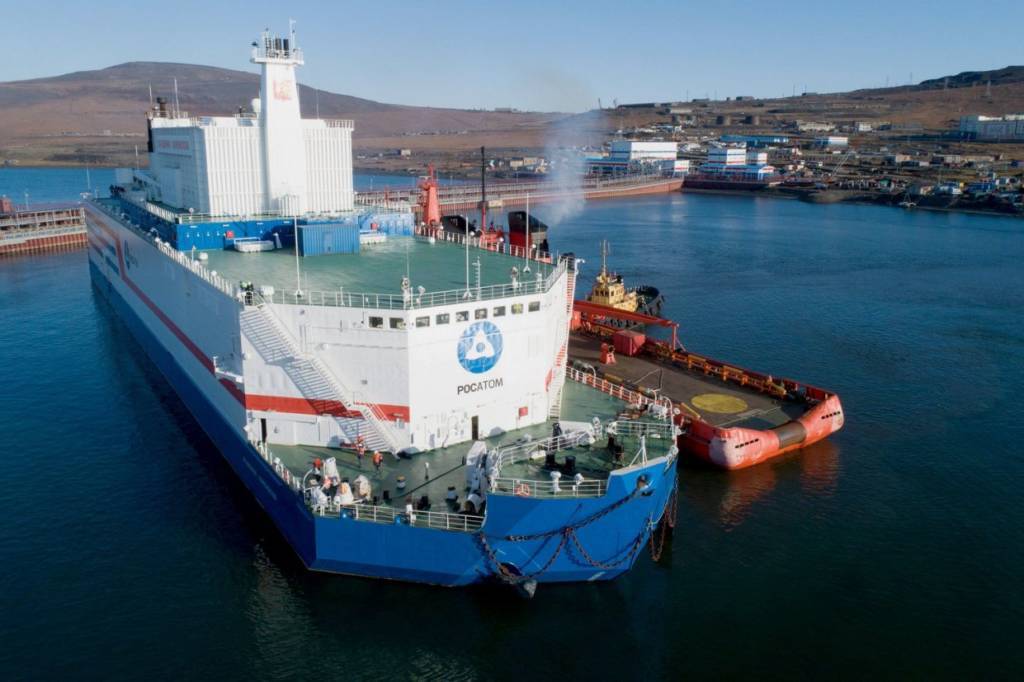 While the EU and United States have all but abandoned nuclear energy as a future power source, with almost no new reactors being built and existing ones being decommissioned, Russia has quietly emerged as the world’s leading builder of peaceful civilian nuclear power plants.

Now the Russian state nuclear company, Rosatom, has completed the first commercial floating nuclear plant and has successfully towed it to its ultimate location in the Russian Far East where access to power is difficult. It could transform the energy demands of much of the developing world, in addition to Russia. An added plus is that nuclear plants emit zero carbon emissions so that political opposition based on CO2 does not apply.

The floating power plant, named Akademik Lomonosov, houses two 35-megawatt reactors, based on the design of the nuclear plants aboard the successful fleet of Russian nuclear-powered icebreakers and capable of providing 70 MW electric power to city of 100,000. By comparison a typical on-land nuclear station in the USA or Europe is 1,000 MW in size making them suitable only for densely populated industrialized areas.

The smaller reactors are far cheaper to build once they go into multiple-unit production and are far more flexible for locations in developing regions of Asia or Africa where lack of reliable electricity is a major constraint to economic development. The construction and installation cost for the Lomonosov is reportedly $480 million, or about $6.90 per watt, slightly more than an average conventional plant. [Reactors after the test Lomonosov will have a greater capacity bringing that cost down further.]

It is designed to last 40 years before being towed away to a special location in Russia for decommissioning, similar to the process for nuclear-powered ships. The special vessel is some 140 meters long and 30 meters wide. The design features well-proven Russian-built nuclear reactors used reliably for some five decades to power its nuclear icebreaker fleet, the world’s largest.

The vessel itself has been designed to be capable of withstanding a tsunami or even a collision with land or a ship. It is designed to be stationed at a specially fixed site on sea and connected to land via underwater cables.

The floating units can act as cogeneration facilities capable of feeding the grid and for desalinating large quantities of seawater making them attractive to the Middle East and other countries with water problems.

In September the Akademik Lomonosov reached its destination at Pevek, in the remote northern autonomous district of Chukotka, where it will be connected from a fixed site offshore to the grid by year end. It is the only operating floating nuclear reactor power plant in existence today, a significant accomplishment given the massive Western economic sanctions on Russia since 2014. The offshore Lomonosov will more than replace the existing small nuclear plant at Bilibino, currently the smallest and the northernmost operating nuclear power plant in the world, which is being decommissioned as well as a small conventional plant.

The idea to build a nuclear power reactor on a special barge or floating platform has major advantages. First because the reactor units are far smaller and designed for floating offshore sites, they can be modular or produced in a factory, giving major economic savings over conventional nuclear plants.

Typically, conventional nuclear reactors must be entirely custom made on site making them enormously expensive and years in the construction, as much as 18 years in some cases. The small floating reactors could be scaled up to support areas with limited energy resources. And finding  large land space for siting is not a problem.

The Akademik Lomonosov was built at the state-owned Baltiysky Zavod (Baltic Shipyard)a special shipyard at St. Petersburg building nuclear icebreakers. It was then towed over a period of weeks from Murmansk to its destination at Pevek. Pevek is a key port in Russia’s Northern Sea Route. The company Rosenergoatom stated, “As the floating plant is going to be located in Pevek, it will boost the social and economic development of the Chaun municipal district specifically and Chukotka in general. In addition, it will become one of the key infrastructure elements within the Northern Sea Route development program.” Recently Russia has been developing the Northern Sea Route to Asia in the Arctic waters to transport Russian liquified natural gas to China and other Asian markets. Several more floating nuclear power plants are planned along the route as the trade expands.

Russia has the world’s largest fleet of nuclear-powered icebreakers, a well-developed experience base to build their floating reactors which use the same basic reactor. The Baltiysky shipyard, one of Russia’s largest,contains all necessary supporting industries: engineering department, woodwork production, marine machine building, power engineering, metallurgical production, research and development department and the shipyard itself. The completion of the Lomonosov is a major feat given that the parent company, United Shipbuilding Corporation,was sanctioned in 2014 by the US Treasury over Ukraine and Crimea.

Initially the offshore nuclear plants will be built for remote areas of Russia difficult to power, especially in the mineral and oil rich, but remote, far north. As well, future reactors will be used to power offshore oil and gas platforms in the remote regions. After successful operation of the Lomonosov reactor, plans are to build a fleet of the floating platforms to give cities and towns across Russia electricity including for heating homes and businesses, opening major new possibilities of economic development. Another possible use for floating nuclear plants like Lomonosov is to power desalination plants, where the makers say it is capable of providing 240,000 cubic meters of fresh water daily.

Another advantage of the Russian floating power plants is the fact that they are being built in a major shipyard using tested manufacturing methods rather than on site. This will ultimately bring cost of production quite significantly down as new units are built, making them feasible and affordable for smaller developing countries. Further, nuclear power has critical advantages in that it isn’t intermittent like solar or wind. The reactor fuel for the Akademik Lomonosov lasts 12 years before it must be changed.

At the recent ASEAN meeting of Southeast Asian nations, Russian Prime Minister Dmitry Medvedev held discussions he termed “very promising” about sales of the Russian floating reactors. Medvedev told The Bangkok Post that Russia’s state-owned Rosatom, was open to do deals with Association of Southeast Asian Nations (ASEAN) states. “Talks are underway with some ASEAN countries on the construction of new centers for nuclear science and technology,” he said.

The October 2019  first Russia-Africa summit in Sochi at which Russia declared $20 billion Soviet-era debts of the various African countries to be forgiven, potentially opens another possible new area where Russian nuclear technology, particularly the smaller low-cost Floating Nuclear Power Plants based on success of the Lomonosov, could provide major new energy prospects to develop Africa. To date Russia has been engaged designing a large on-land nuclear power complex in Egypt for four larger units at the El Dabaa NPP site where Russia also granted major low-interest loans.When complete in 2026 it is expected to provide up to 50% of Egypt’s power needs. Russia is also in a nuclear energy discussion with Ethiopia. The fact that Russia today is the most active civilian nuclear contractor in the world is also a major advantage in marketing.

With its floating nuclear plant design Russia is currently in a unique position. The only other country actively developing a floating nuclear plant design, China, is far behind Russia, as its own prototype is still reported in the design phase.  Safety, size and flexibility argue that with the new development, Russia can make a major contribution to the global economy. And for those who believe CO2 is a problem, the technology is emission free.