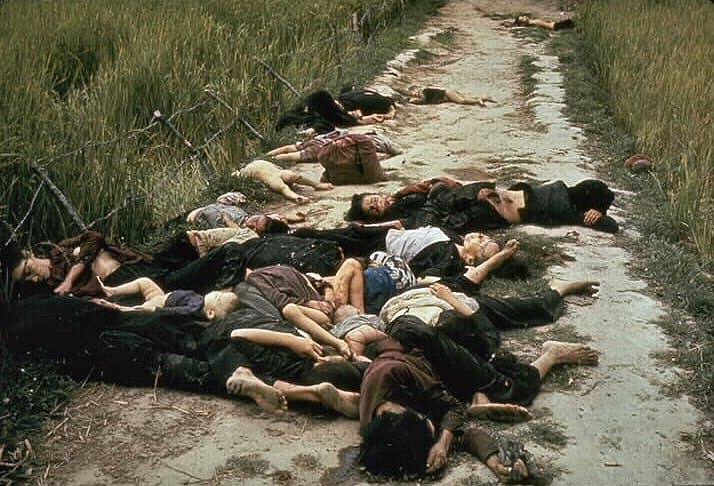 On March 16, 1968, a bloodied unit of the Americal division stormed into a hamlet known as My Lai 4. With military helicopters circling overhead, revenge-seeking Americal soldiers rousted Vietnamese civilians — mostly old men, women and children — from their thatched huts and herded them into the village’s irrigation ditches.

As the round-up continued, some Americans raped the girls. Then, under orders from junior officers on the ground, soldiers began emptying their M-16s into the terrified peasants. Some parents desperately used their bodies to try to shield their children from the bullets. Soldiers stepped among the corpses to finish off the wounded.

The slaughter raged for four hours. A total of 347 Vietnamese, including babies, died in the carnage that would stain the reputation of the U.S. Army. But there also were American heroes that day in My Lai. Some soldiers refused to obey the direct orders to kill.

A pilot named Hugh Clowers Thompson Jr. from Stone Mountain, Ga., was furious at the killings he saw happening on the ground. He landed his helicopter between one group of fleeing civilians and American soldiers in pursuit. Thompson ordered his helicopter door gunner to shoot the Americans if they tried to harm the Vietnamese. After a tense confrontation, the soldiers backed off. Later, two of Thompson’s men climbed into one ditch filled with corpses and pulled out a three-year-old boy whom they flew to safety.

A Pattern of Brutality

While a horrific example of a Vietnam war crime, the My Lai massacre was not unique. It fit a long pattern of indiscriminate violence against civilians that had marred U.S. participation in the Vietnam War from its earliest days when Americans acted primarily as advisers.

In 1963, Capt. Colin Powell was one of those advisers, serving a first tour with a South Vietnamese army unit. Powell’s detachment sought to discourage support for the Viet Cong by torching villages throughout the A Shau Valley. While other U.S. advisers protested this countrywide strategy as brutal and counter-productive, Powell defended the “drain-the-sea” approach then — and continued that defense in his 1995 memoirs, My American Journey.

After his first one-year tour and a series of successful training assignments in the United States, Maj. Powell returned for his second Vietnam tour on July 27, 1968. This time, he was no longer a junior officer slogging through the jungle, but an up-and-coming staff officer assigned to the Americal division.

By late 1968, Powell had jumped over more senior officers into the important post of G-3, chief of operations for division commander, Maj. Gen. Charles Gettys, at Chu Lai. Powell had been “picked by Gen. Gettys over several lieutenant colonels for the G-3 job itself, making me the only major filling that role in Vietnam,” Powell wrote in his memoirs.

But a test soon confronted Maj. Powell. A letter had been written by a young specialist fourth class named Tom Glen, who had served in an American mortar platoon and was nearing the end of his Army tour. In a letter to Gen. Creighton Abrams, the commander of all U.S. forces in Vietnam, Glen accused the Americal division of routine brutality against civilians. Glen’s letter was forwarded to the American headquarters at Chu Lai where it landed on Maj. Powell’s desk.

“The average GI’s attitude toward and treatment of the Vietnamese people all too often is a complete denial of all our country is attempting to accomplish in the realm of human relations,” Glen wrote. ”Far beyond merely dismissing the Vietnamese as ‘slopes’ or ‘gooks,’ in both deed and thought, too many American soldiers seem to discount their very humanity; and with this attitude inflict upon the Vietnamese citizenry humiliations, both psychological and physical, that can have only a debilitating effect upon efforts to unify the people in loyalty to the Saigon government, particularly when such acts are carried out at unit levels and thereby acquire the aspect of sanctioned policy.”

Glen’s letter contended that many Vietnamese were fleeing from Americans who “for mere pleasure, fire indiscriminately into Vietnamese homes and without provocation or justification shoot at the people themselves.” Gratuitous cruelty was also being inflicted on Viet Cong suspects, Glen reported.

“Fired with an emotionalism that belies unconscionable hatred, and armed with a vocabulary consisting of ‘You VC,’ soldiers commonly ‘interrogate’ by means of torture that has been presented as the particular habit of the enemy. Severe beatings and torture at knife point are usual means of questioning captives or of convincing a suspect that he is, indeed, a Viet Cong…

“It would indeed be terrible to find it necessary to believe that an American soldier that harbors such racial intolerance and disregard for justice and human feeling is a prototype of all American national character; yet the frequency of such soldiers lends credulity to such beliefs. … What has been outlined here I have seen not only in my own unit, but also in others we have worked with, and I fear it is universal. If this is indeed the case, it is a problem which cannot be overlooked, but can through a more firm implementation of the codes of MACV (Military Assistance Command Vietnam) and the Geneva Conventions, perhaps be eradicated.”

Glen’s letter echoed some of the complaints voiced by early advisers, such as Col. John Paul Vann, who protested the self-defeating strategy of treating Vietnamese civilians as the enemy. In 1995, when we questioned Glen about his letter, he said he had heard second-hand about the My Lai massacre, though he did not mention it specifically. The massacre was just one part of the abusive pattern that had become routine in the division, he said.

The letter’s troubling allegations were not well received at American headquarters. Maj. Powell undertook the assignment to review Glen’s letter, but did so without questioning Glen or assigning anyone else to talk with him. Powell simply accepted a claim from Glen’s superior officer that Glen was not close enough to the front lines to know what he was writing about, an assertion Glen denies.

After that cursory investigation, Powell drafted a response on Dec. 13, 1968. He admitted to no pattern of wrongdoing. Powell claimed that U.S. soldiers in Vietnam were taught to treat Vietnamese courteously and respectfully. The American troops also had gone through an hour-long course on how to treat prisoners of war under the Geneva Conventions, Powell noted.

“There may be isolated cases of mistreatment of civilians and POWs,” Powell wrote in 1968. But “this by no means reflects the general attitude throughout the Division.” Indeed, Powell’s memo faulted Glen for not complaining earlier and for failing to be more specific in his letter.

Powell reported back exactly what his superiors wanted to hear. “In direct refutation of this [Glen’s] portrayal,” Powell concluded, “is the fact that relations between American soldiers and the Vietnamese people are excellent.”

Powell’s findings, of course, were false. But it would take another American hero, an infantryman named Ron Ridenhour, to piece together the truth about the atrocity at My Lai. After returning to the United States, Ridenhour interviewed American comrades who had participated in the massacre.

On his own, Ridenhour compiled this shocking information into a report and forwarded it to the Army inspector general. The IG’s office conducted an aggressive official investigation and the Army finally faced the horrible truth. Courts martial were held against officers and enlisted men implicated in the murder of the My Lai civilians.

But Powell’s peripheral role in the My Lai cover-up did not slow his climb up the Army’s ladder. Powell pleaded ignorance about the actual My Lai massacre, which pre-dated his arrival at the Americal. Glen’s letter disappeared into the National Archives — to be unearthed only years later by British journalists Michael Bilton and Kevin Sims for their book Four Hours in My Lai. In his best-selling memoirs, Powell did not mention his brush-off of Tom Glen’s complaint.

Powell did include, however, a troubling recollection that belied his 1968 official denial of Glen’s allegation that American soldiers “without provocation or justification shoot at the people themselves.” After mentioning the My Lai massacre in My American Journey, Powell penned a partial justification of the American’s brutality. In a chilling passage, Powell explained the routine practice of murdering unarmed male Vietnamese.

“I recall a phrase we used in the field, MAM, for military-age male,” Powell wrote.

“If a helo spotted a peasant in black pajamas who looked remotely suspicious, a possible MAM, the pilot would circle and fire in front of him. If he moved, his movement was judged evidence of hostile intent, and the next burst was not in front, but at him. Brutal? Maybe so. But an able battalion commander with whom I had served at Gelnhausen (West Germany), Lt. Col. Walter Pritchard, was killed by enemy sniper fire while observing MAMs from a helicopter. And Pritchard was only one of many. The kill-or-be-killed nature of combat tends to dull fine perceptions of right and wrong.”

While it’s certainly true that combat is brutal, mowing down unarmed civilians is not combat. It is, in fact, a war crime. Neither can the combat death of a fellow soldier be cited as an excuse to murder civilians. Disturbingly, that was precisely the rationalization that the My Lai killers cited in their own defense.

But returning home from Vietnam a second time in 1969, Powell had proved himself the consummate team player.