But they've switched to doing so clandestinely 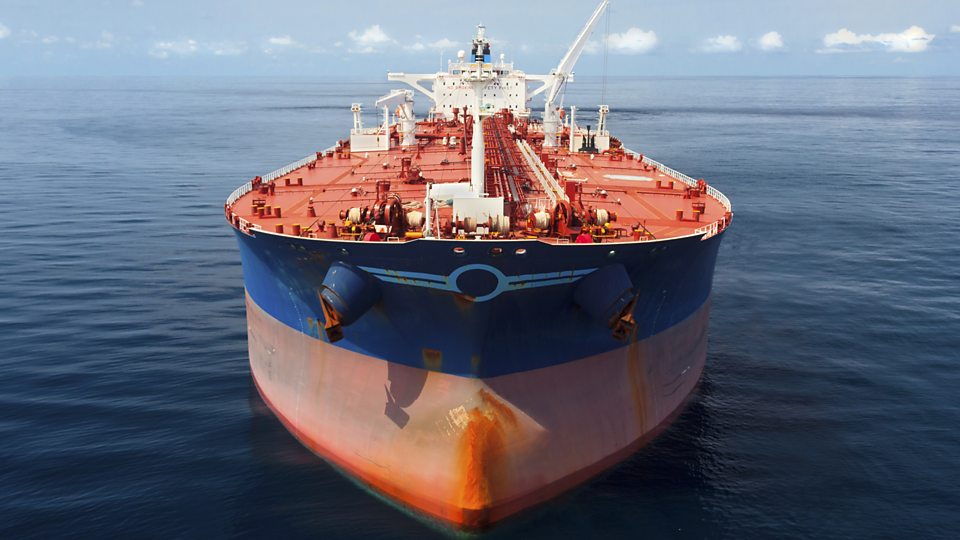 Editor’s note: Chinese importers bought record amounts of Iranian oil and gas in April to build up supplies before US sanctions waiver end so it wasn’t clear if they would continue buying after that, but by now it’s clear that some continue to do so albeit as clandestinely as possible. Depending on the status of the oil for goods program with Russia China may now be the only remaining direct buyer of Iranian oil.

After being hit by the trade war and U.S. sanctions on Iran, some Chinese buyers of liquefied petroleum gas from the Persian Gulf nation are finding it’s too tough a habit to kick.

China sourced around a fifth of its LPG — used as cooking fuel, in cigarette lighters and to make plastic — from the U.S before Beijing slapped a 25% tariff on the gas last August as the trade tussle heated up. Buyers then turned to Iran, which accounted for around a third of imports in April, before President Donald Trump blocked all energy exports from the country in May. 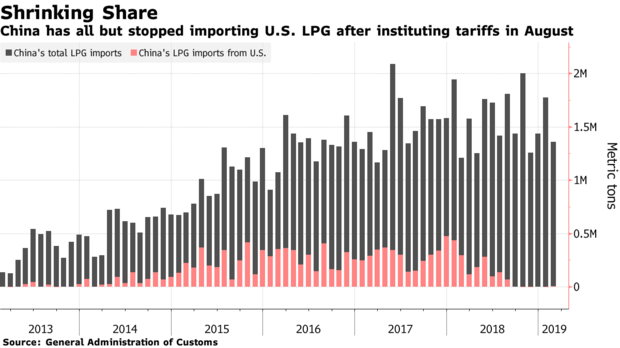 But some Chinese customers are still buying from Iran, according to Kpler SAS. Based on ship-tracking data, the Paris-based data intelligence firm estimates that at least five supertankers loaded Iranian LPG in May and June that was destined for China. That would equate to around $100 million of the gas, according to Bloomberg calculations.

“They’ve started using a variety of techniques to hide their activity,” Ilya Niklyaev, an LPG analyst at Kpler, said in an interview. “Like switching off transponders as well as intentionally signaling wrong destinations and indicating loading ports in Qatar, Saudi Arabia or the U.A.E.”

The predicament of the Chinese buyers underscores how the White House’s aggressive trade and foreign policy is disrupting global commodity flows. To avoid running afoul of the U.S. sanctions, LPG importers in Asia’s largest economy would have to turn to more expensive supplies from elsewhere in the Middle East or Africa.

Tankers carrying Iranian oil and gas are notorious for masking their journeys by turning off satellite locator beacons, a technique known as going dark, and transferring fuel between ships to hide the origin of the cargo.

LPG tanker Sea Dolphin sailed into the Persian Gulf between Iran and Qatar with empty tanks on May 17, and then turned off its beacon, Kpler said in a June 6 note. It turned the locator back on May 26, indicating its tanks were now full, and headed toward the Maldives, where it again went dark.

Another ship, the Pacific Yantai, loaded its tanks near where the Sea Dolphin had stopped, and then set sail toward China, according to Kpler. Bloomberg ship-tracking data confirms the movements of the two vessels and show the Pacific Yantai appearing to drop off a partial cargo at Ningbo on June 14.

The Sea Dolphin is owned by Kunlun Trading Co., data compiled by Bloomberg show. Staff who answered the phone at its Hong Kong office said they weren’t authorized to speak to the media and there was no spokesperson. There was no response to emails sent to Kunlun’s investor relations department.

Pacific Yantai is owned by China’s Pacific Gas, Bloomberg-compiled data show. The ship was on a long-term charter, said a staff member at the company’s Shanghai office who asked not to be identified as the person is not authorized to speak to media. The person wouldn’t name the company that chartered the vessel. Nobody answered emails sent to generic addresses for information and investor relations at Pacific Gas.

Chinese refiners may also be circumventing American sanctions to import Iranian oil, with FGE saying in a note last week that it expects some degree of non-compliance. China probably isn’t complying with U.S. sanctions on Iranian crude, U.S. Deputy Energy Secretary Dan Brouillette said Friday, adding that he didn’t have any hard evidence to show this. Beijing will likely become compliant as it wants a good trade deal with Washington, he said.

LPG is an important export for Iran. Some 83% of the country’s 507,000 barrels a day of petroleum product shipments in 2017 were LPG and fuel oil, according to Energy Information Administration data. That compared with 2.5 million barrels a day of crude and condensate exports.

China took 346,000 tons, or 80%, of Iran’s LPG exports in May, Kpler estimated. If the cargoes loaded before the end of the U.S. waivers on May 2 they may not have been in contravention of the sanctions. Iran is likely to export a total of 400,000-500,000 tons in June with at least eight supertankers set to load the fuel in coming weeks, Kpler said in the note. Three supertankers have loaded LPG from Iran in June, of which at least one is headed for China, it said. 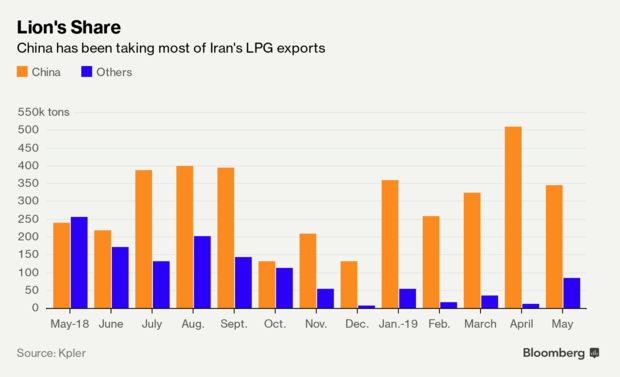 Kpler and Chinese customs figures show similar overall LPG import data for the past year. But while the Kpler numbers show a sizable portion coming from Iran, the Chinese data has no cargoes from the Persian Gulf nation since mid-2017.

Iranian LPG supplies have been among the cheapest in the world as customers from Japan to South Korea turned away from doing business with the country following the U.S. sanctions. China could turn to other suppliers, like Qatar and Saudi Arabia, but it would be more expensive.

After rising 21% this year through late April, the benchmark east Asian price for propane, a type of LPG, has since fallen 24%, according to data from PVM Oil Associates. The contract fell 1% to $405.91 a ton on Wednesday.

“While the LPG market isn’t expected to be nearly as tight in the second half of 2019, China will still have to lean heavily on LPG supplies from Iran, as well as from Qatar, Saudi Arabia, Nigeria and Angola to fill the gap left behind by the U.S,” said Han Wee Ong, a Singapore-based senior consultant at FGE.