Editor’s note: Last year for the 69th anniversary of their modern navy the Chinese staged a massive Beijing-only parade in the contested South China Sea. Having made their point, they this year for the 70th anniversary staged a smaller parade just off their mainland, and invited other navies to attend as well. The US snubbed the event, but nobody else who is something in Asia and was invited (obviously Taiwan was left out) felt they could afford to be that impolite. A total of 13 foreign navies including those of Russia, India, Japan, South Korea, Malaysia, Philippines, Singapore, and Vietnam took part as well as over 30 Chinese ships, including a new type of destroyer which was showcased for the first time. It would have been quite the spectacle as well but weather interfered.

Chinese President Xi Jinping sailed aboard a People’s Liberation Army guided missile destroyer in the Yellow Sea Tuesday afternoon during yet another military review marking the 70th anniversary of the Chinese navy. But he probably did not see much of the PLA’s advanced ships and aircraft on show due to a low cloud of soot and ash.

Xi addressed the PLA seamen and naval officers from more than 60 foreign navies attending a fleet review on Tuesday afternoon in waters off the eastern Chinese port city of Qingdao. 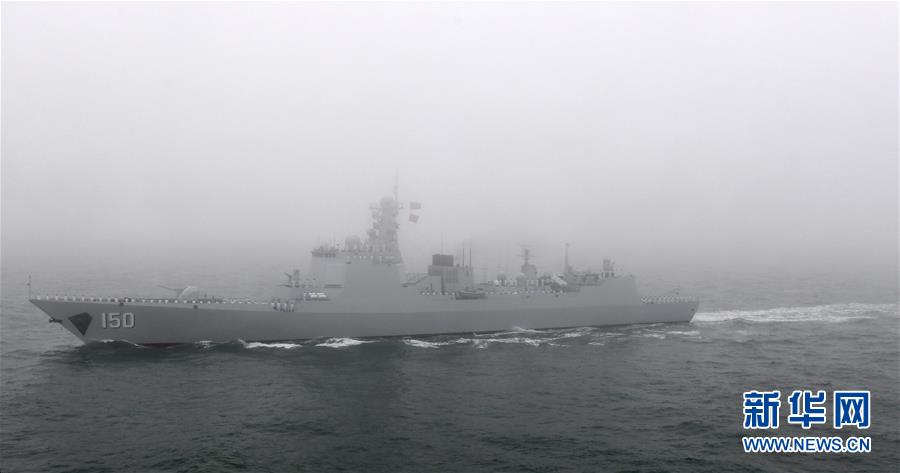 He then emerged aboard the Xining, a Type 052D destroyer, to preside at the parade, during which the Liaoning, China’s sole commissioned aircraft carrier repurposed from a Soviet-built hull, sailed alongside numerous other surface ships and nuclear submarines in the latest display of Beijing’s naval prowess.

Yet despite all the fanfare – the fourth massive parade since Xi took the helm of the nation and the PLA in 2012 – thick smog blanketed the waters surrounding Qingdao for the better part of the day.

The Liaoning, the 12,000-ton Type 055 destroyer and other assets the PLA is proud of, were barely visible in footage aired by state broadcaster China Central Television as visibility plunged to a mere few hundred meters. The event ended at about 3:30 pm, giving observers the impression it had been hastened amid the gloomy weather.

Xinhua reported, however, that 32 vessels and 39 warplanes, in six armadas, passed the Xining for Xi to review.

With China’s first homemade carrier the Type 001A still moored at its homeport of Dalian, the Type 055 assumed a leading role throughout the event. Designed to guard China’s aircraft carriers with a full displacement of more than 12,000 tonnes, the colossal vessel is the biggest destroyer ever built in Asia and is believed to be the world’s second most powerful vessel of its class after the US Navy’s Zumwalt-class destroyer.

Chinese papers including the Global Times reported prior to the parade that the PLA would also showcase the Type 071 amphibious assault ship, the nuclear-powered Type 095 attack submarine and a Type 094 ballistic missile submarine. But it remains to be confirmed if all of these powerful vessels took part in the event, given that CCTV did not broadcast the parade live as previously scheduled.

A flotilla of 16 vessels from Russia, Australia, Bangladesh, Brunei, India, Japan, South Korea, Malaysia, the Philippines, Singapore, Thailand and Vietnam sailed into Chinese waters last week to take part in the event in a show of unity.

The sight of a number of naval vessels from Japan and Southeast Asia casting aside territorial rifts and dispatching vessels to congratulate Beijing on its naval anniversary has been interpreted by Chinese media as a gesture of reconciliation. Beijing has been steadily building up its naval presence to back its territorial claims in the East and South China Seas.