China’s Australian Soldier Imagine Is Not “Fake” or “Doctored”. It’s Symbolic and 100% Appropriate

Afghanistan's soil isn't actually made up of a puzzle colored as its flag? You don't say

Editor’s note: To howl howls of outrage over this is to insult your own intelligence (also called playing dumb) and that of everyone else. Obviously enough the Chinese were not trying to pass off the photo as of a specific event. Afghanistan landscape does not consist of a puzzle with the patter of its national flag, and no Australian soldier ever cut the throat of a child in a blue sack while standing on a massive Australian flag.

Obviously, it’s a symbolic image, and moreover, it is perfectly appropriate. Not just on the account of non-sanctioned murderers of out-of-control SAS platoons that have now come to light, but also on the account of all the officially-sanctioned “collateral damage” over the years.

If Australian politicians spent more time worrying about Empire’s Australian auxiliaries not killing Afghans in their own occupied country, and less time about China calling attention to the ugly reality they’d be better people. 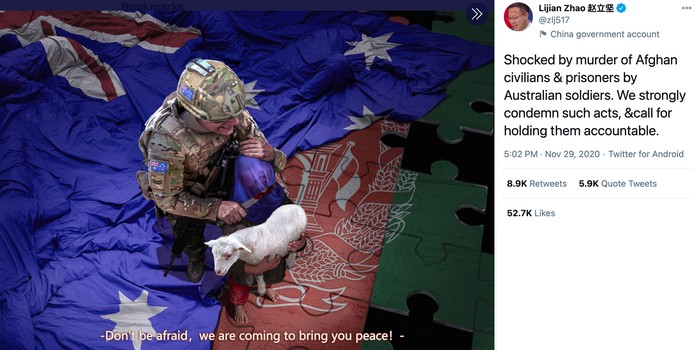 Even as the world speculates on what a post-Trump world will look like, one legacy seems secure. Almost overnight after his inauguration in 2017, US President Donald Trump reinvented the term “fake news” to dismiss any information he didn’t like or want his supporters to see.

From the World Health Organization to his taxes to Joe Biden’s election win, Trump has deftly substituted imagination for reality.

But now, it seems Australia too has mastered the art of the “fake news” distraction.

A few weeks ago, news came out that Australian troops had murdered some 39 innocent civilians in Afghanistan in the course of the war there. Last weekend, an obscure artist in China created a picture that was widely circulated in Chinese social media, and which Chinese Foreign Ministry spokesman Zhao Lijian later tweeted.

Unexpectedly, Australian politicians and media quickly got up in arms. Prime Minister Scott Morrison led the charge by pronouncing the illustration to be a “fake image.” He then called for Twitter to censor Zhao’s tweet on the grounds of it being “fake news.”

Australian media have followed suit. One reporter argued that China was “childish” and a “bully.” An Australian politician proclaimed the image to be “gratuitous, inflammatory, and deeply offensive.” In their view, China is just angry at Australia for speaking up about Hong Kong and Xinjiang, banning Huawei, and questioning China’s handling of the coronavirus that causes Covid-19.

Here are some responses.

First, this is not “fake news.” Australian military murdering Afghan civilians is real news. Watch, for example, a documentary made by the Australian Broadcasting Corporation titled “Killing Field: Explosive new allegations of Australian special forces war crimes.” The issues are real. The events are real. The tragedy is real. The pain is real.

Second, this is not a “fake image.” It is art, commonly understood to be an expression or application of creative skills to produce artifacts to evoke emotive responses.

I recall a few years ago when many in the West sneered at Muslims for getting for angry at “art” that satirized the Prophet Muhammad in the Danish newspaper Jyllands-Posten. Many Muslims accused the West of defaming their religion, but the West hollered “Freedom of speech.”

But even in that fervor, never once did I hear a Muslim complain on the basis of an “inaccurate” or “fake image.” Australia’s response here is truly puzzling. What are we to make of cute pictures of flying reindeer and Santa Claus found on our Christmas cards now?

I was in a protest with Muslim friends over Jyllands-Posten’s cartoons, and I can tell you that the Muslims’ passions and sense of injury were real. They cared deeply for the issues of defamation and respect for religious faith. What are the issues Australia is fighting for here?

To Australian media and politicians again … this is art.

Third, let’s talk about what is “gratuitous, inflammatory, and deeply offensive.” Afghanistan has been in perpetual war for most of the last two decades. This is a tragedy, especially when considered in light of the larger context of other perpetual, endless wars.

When news came out about Australia’s troops in Afghanistan a few weeks ago, many understandably felt a shared human pain. The art may seem graphic, but so is reality. To the extent the art rallies us to do better and end the human tragedies, it should be commended and saluted.

Fourth, about China being “childish” and a “bully,” I wish Australia would look deeply in the mirror. Australia is not a nation under attack, yet its soldiers have gone on a prowl in foreign lands.

Besides killing innocent men, women and children, Australian troops have also been reported to fly Nazi Swastikas on patrols and drink from dead Taliban members’ prosthetic legs. I hope we are not standing at the tip of an iceberg. It is time for Australia to make substantive amends fast, not fight a selfish public relations war.

Fifth, Australian leaders and media should stop crying about how Australians must stand up to China. Over the past two years or so, Australia has taken dramatic actions following the US lead in fighting a trade, technology, and ideology war against China. This is Australia’s choice, not China’s.

Australia has spread lies regarding Huawei’s 5G insecurity; it has sided with and incited foreign-sponsored hooligans in Hong Kong; it has echoed and amplified Trump’s irresponsible claims of a Chinese-made virus; and it has created false, unsubstantiated reports about so-called Xinjiang “concentration camps.” Yes, Australia should stop. But not because of China per se, but because that’s the basic, decent, human thing to do.

Please understand, however, that even after Australia does stop, it still has to face the music for the actions its troops took in Afghanistan.

China does not want to be Australia’s judge or savior. Australia has to face history and humanity itself. Please grow up, get some backbone, stop being America’s poodle, and take some responsibility for yourself.