It's the age of the missile, not of the ship 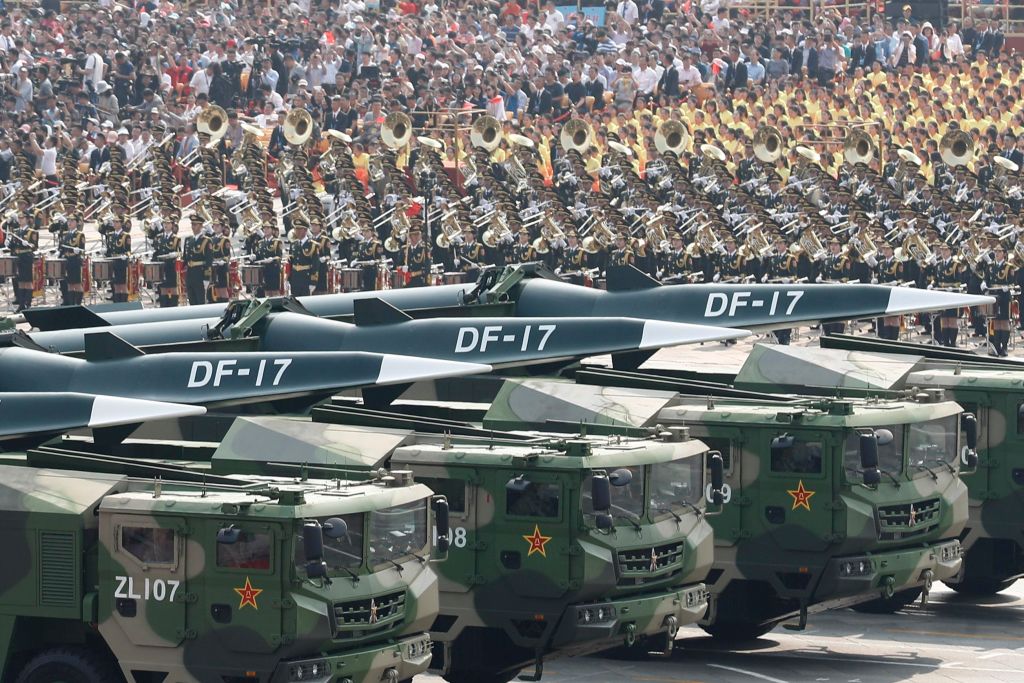 The People’s Republic of China held a great parade (3h video, shorter version with comments) to celebrate the 70th anniversary of its founding. Some interesting new weapons were on display that are of strategic significance.

New classes of quiet diesel submarines and new developments in mine and torpedo technology make operations close to tense coastlines far more dangerous today than in the past. As a result, U.S. aircraft carriers are no longer immune from risk when entering waters within range of enemy forces.

More serious still is the deployment of Russian and Chinese area denial systems, like the so-called carrier killer DF-21 antiship missile developed in the last decade by China. Its range of over 1,000 miles far outstrips the range of any warplane on U.S. flight decks today.

Sailing a U.S. carrier strike force through the Taiwan Strait these days—in a show of support for pro-democracy forces in Hong Kong, for instance—would risk catastrophe.

Iran does not yet possess anything as sophisticated as China’s DF-21. However, its domestically produced Noor antiship missile (itself a reverse-engineered rip-off of an earlier Chinese cruise missile) is dangerous at over 100 miles. […] The combination of these missiles and Iran’s fleet of fast and cheap patrol boats has been enough to keep the USS Lincoln out of the Persian Gulf as tensions between Iran and the United States increased this summer.

The carrier killer DF-21 is no longer China’s top weapon. It is a ballistic missile and a U.S. carrier group may be able to use its missile defenses to take it down. China used the last years to exceed its capabilities.

One closely-watched weapon unveiled Tuesday was the Dongfeng-17, a glider capable of carrying a nuclear warhead. Foreign analysts say is designed to maneuver at high speed to evade anti-missile defenses. Another missile displayed, the Dongfeng-41, is believed to have a range of up to 15,000 kilometers (9,400 miles), which would make it world’s longest-range military missile. Analysts say it may be able to carry as many as 10 warheads to hit separate targets.

Here are some screenshots from the parade video: 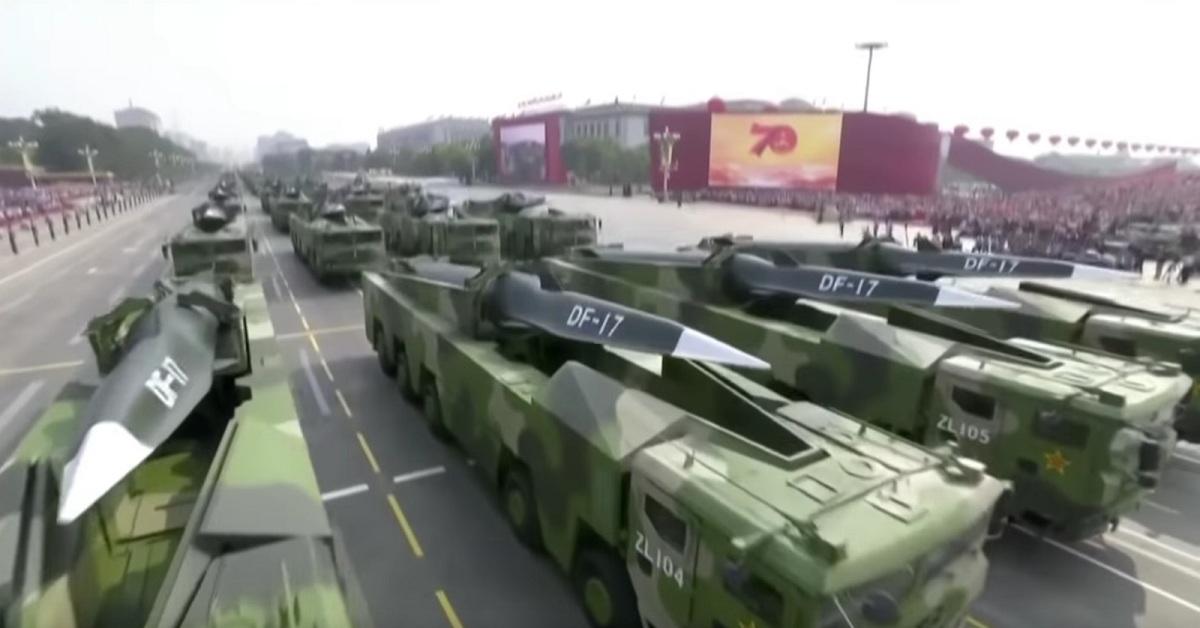 The DF-17 is a road mobile system. Its first stage is a solid fuel missile. The second stage is the hypersonic glider which can fly beyond mach 5 and is maneuverable. This is another aircraft carrier killer against which the U.S. has absolutely no defenses. 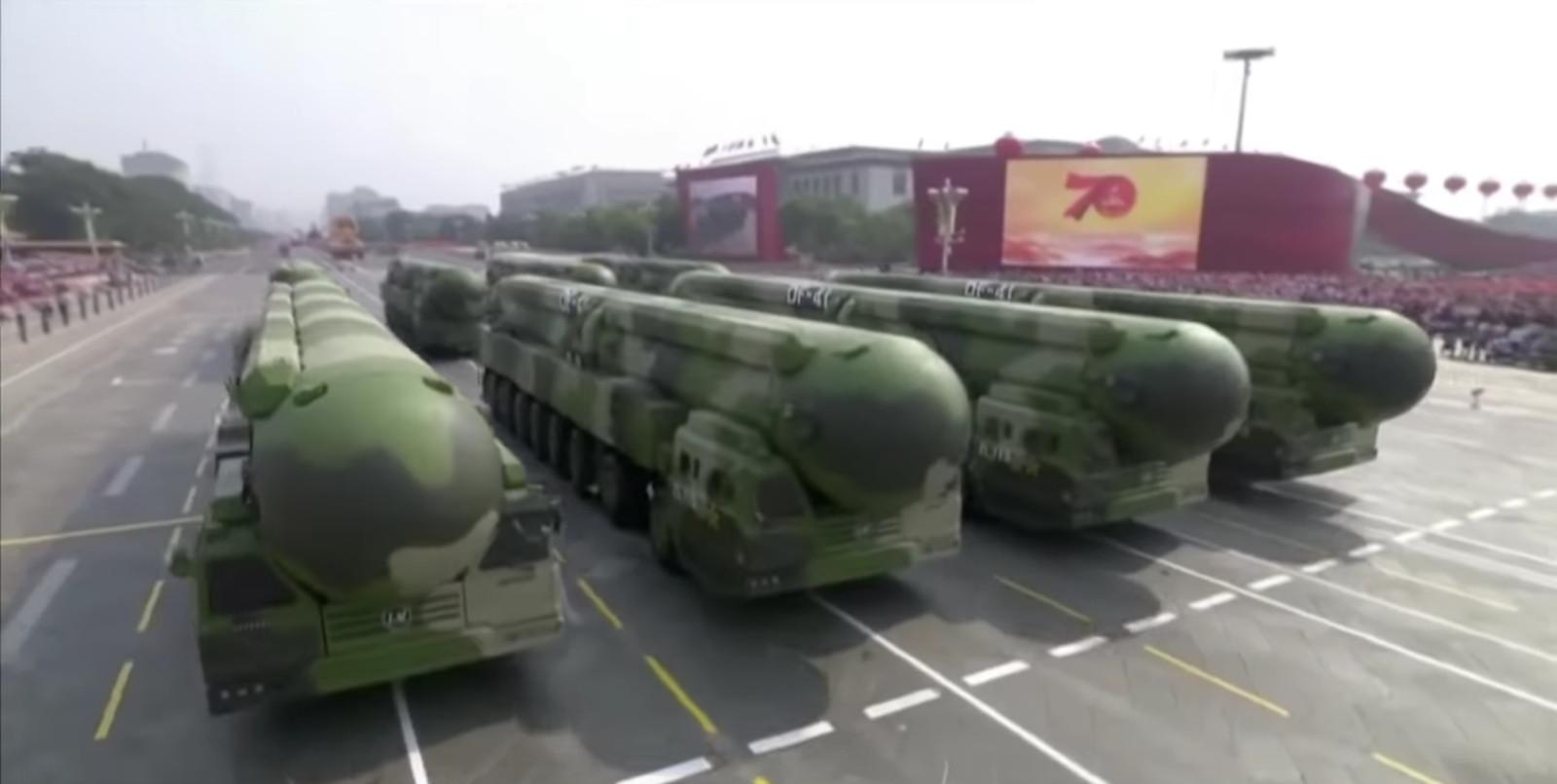 The DF-41 is a road mobile beast. The 8 axle vehicle can transport, erect and launch the missile. The DF-41 is supposedly a solid fuel missile. That means that it only requires a very short time to deploy and launch. It will be difficult to interdict while it is still on the ground. There were a total of 16 of these monsters in the parade.

There were other systems of interests: 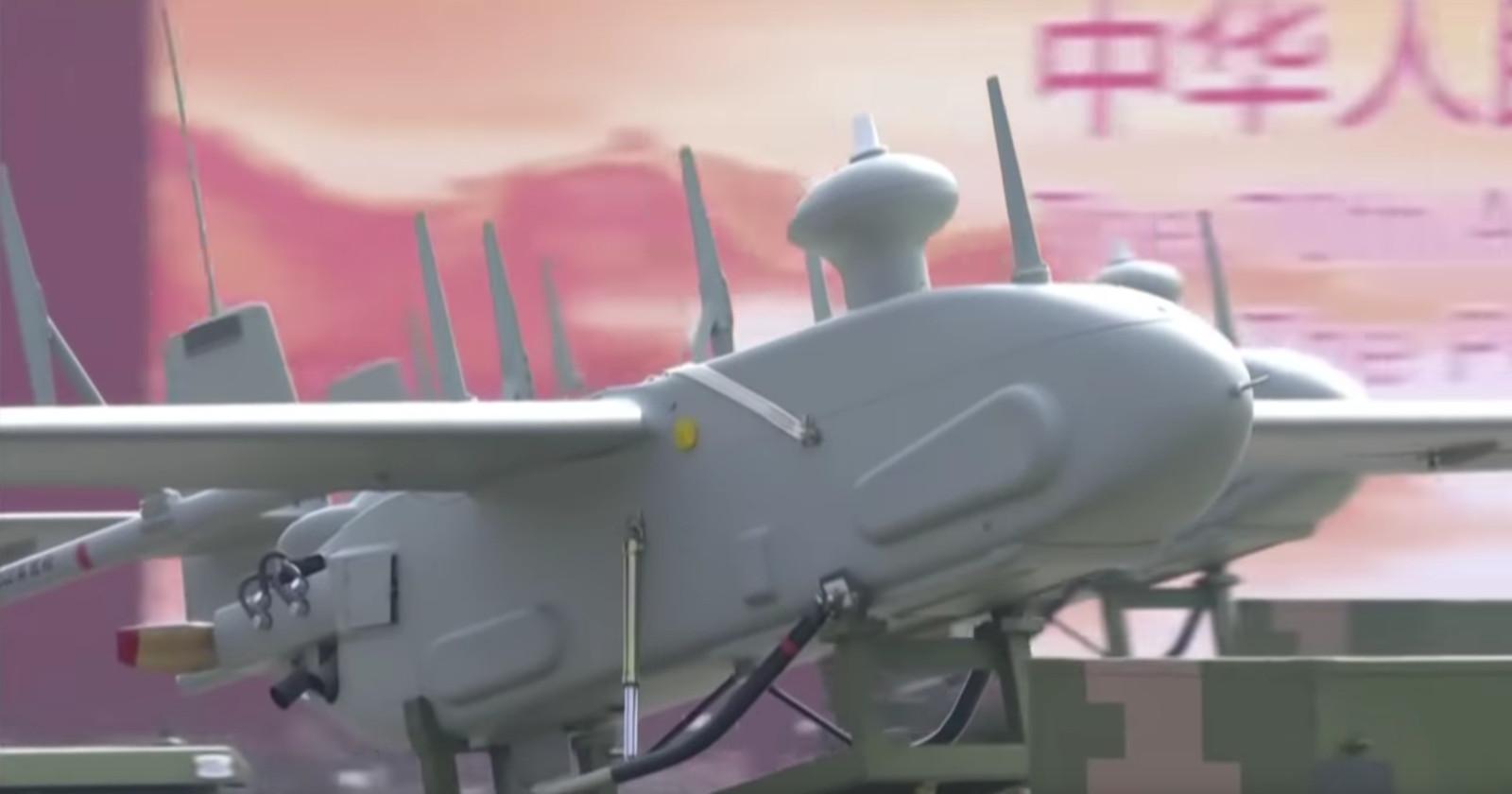 This seems to be a communication relay drone. It can be used to communicate with, and steer, another drone from the ground even when the second one is over the horizon looking for U.S. ships. It makes Chinese drones independent of satellite communications. 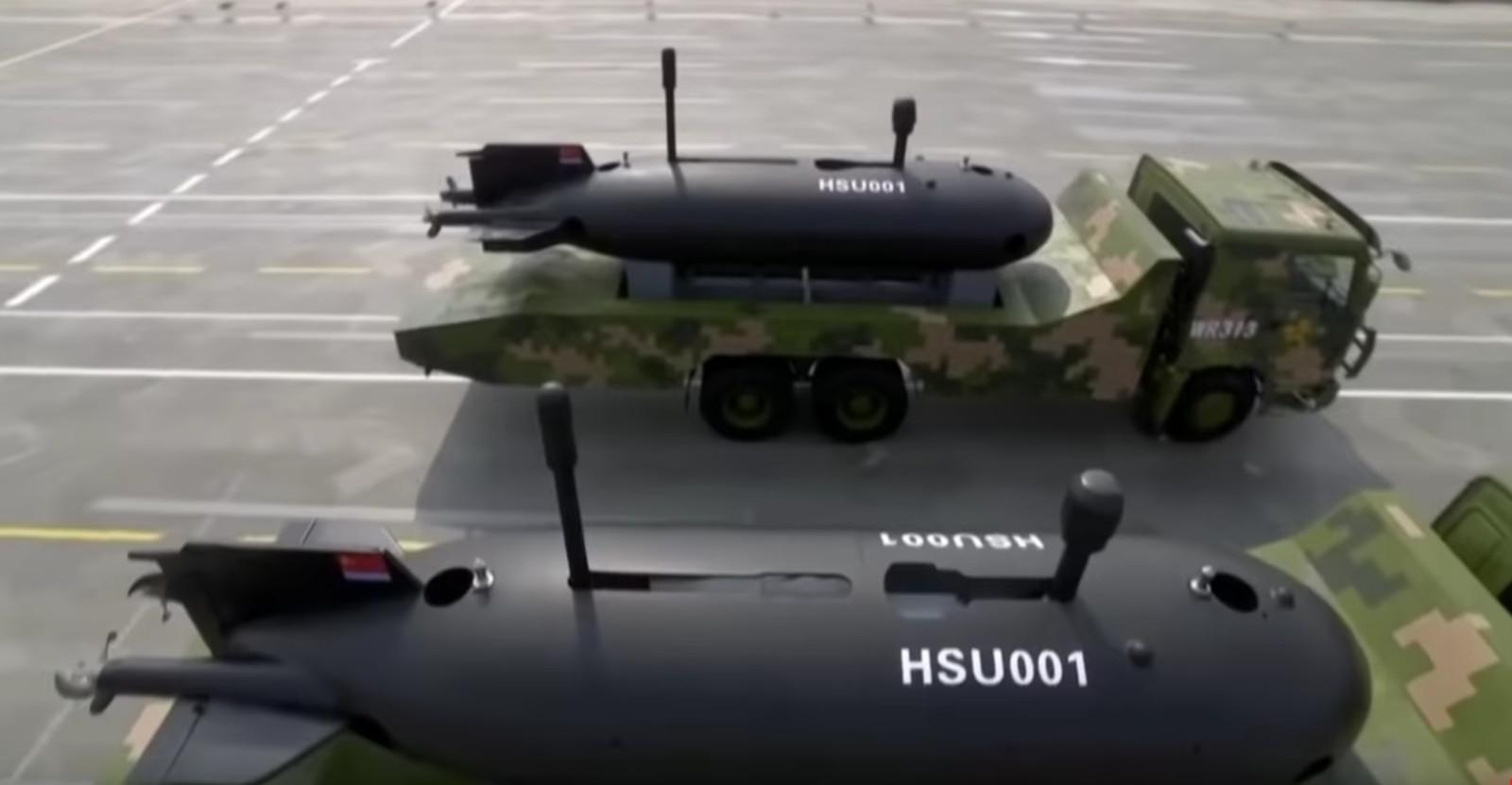 The HSU-001s are also drones but they do not fly but dive. These are likely to be used as reconnaissance vehicle against U.S. submarines and ships. They could also be useful for secretly mining an enemy harbor. 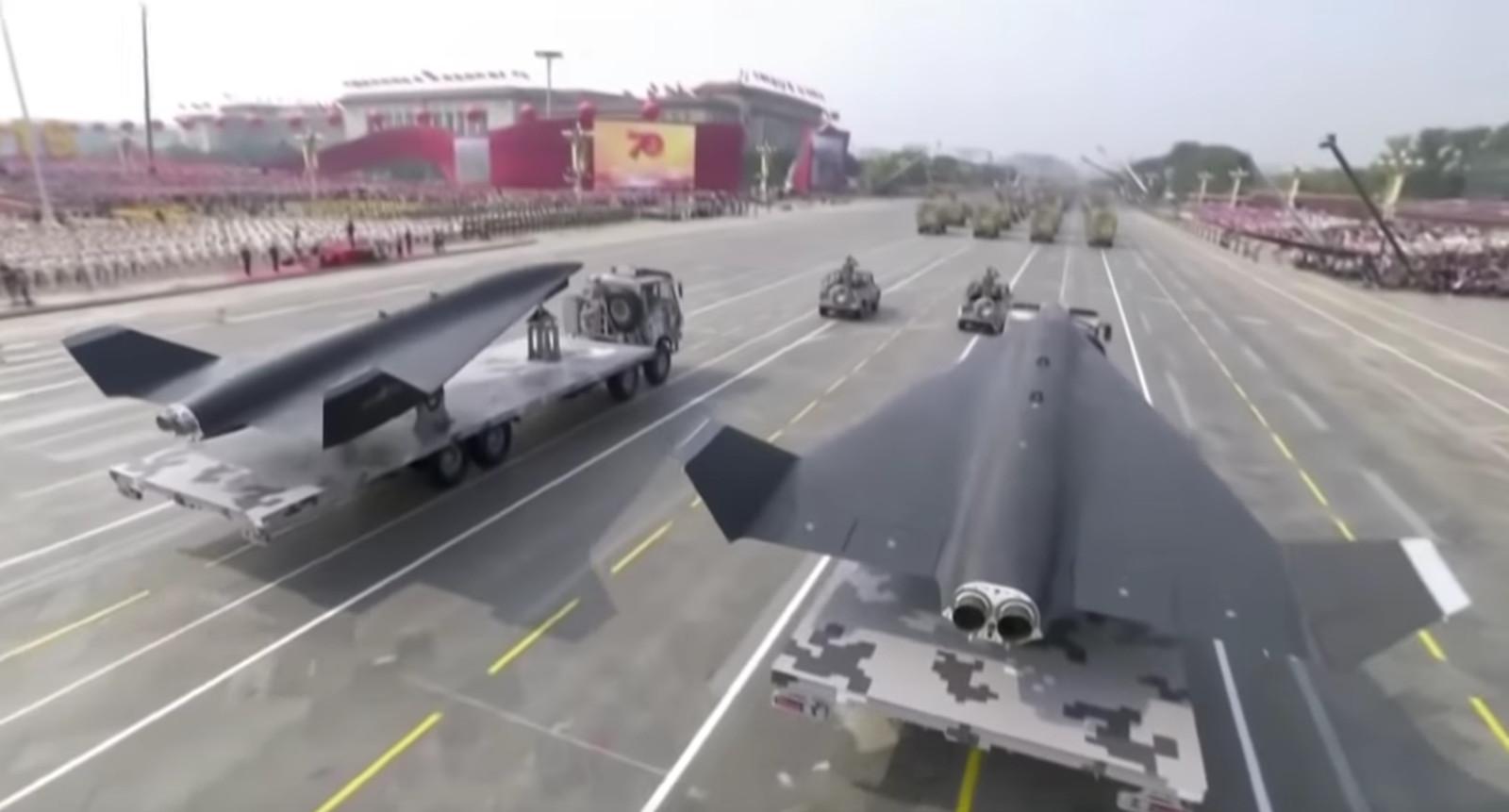 This unmanned thingy is interesting. It looks fast and stealthy and has two liquid fueled engines. While it has an undercarriage the two suspension lugs on its top insinuate that it can be launched from another plane. It looks fast and stealthy but is confusing. Is it a bomber that returns to an airport? It looks a bit too flimsy for that. Is the thing itself a “suicide drone” i.e. the warhead that hits the target? Why then does it need an undercarriage? It might be for reconnaissance but it has no visible optic systems. 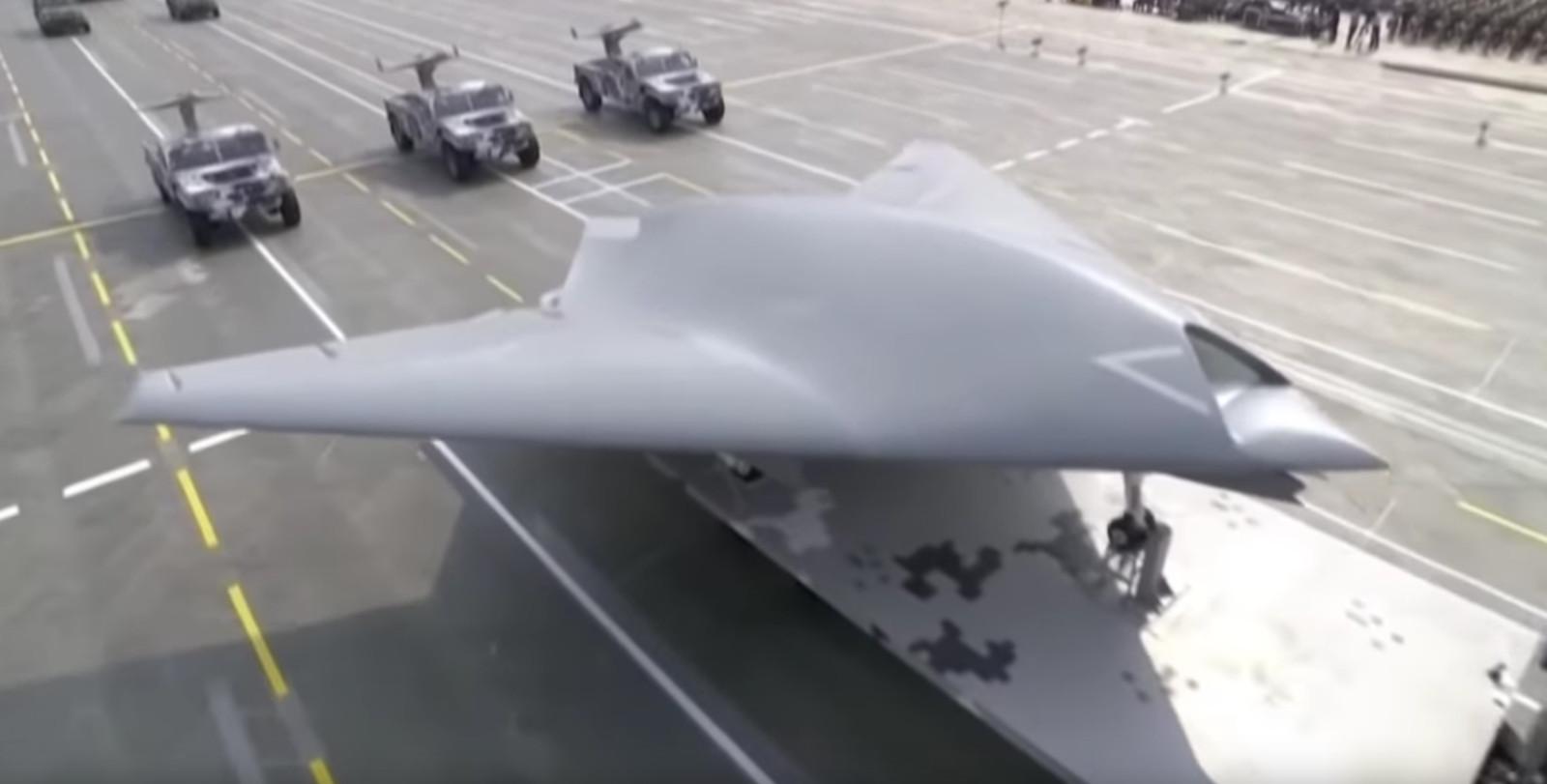 This is a well sized unmanned and stealthy drone that can be used as a bomber or to launch stand-off missiles. The one system shown may be a mock up but that means that something like it is in the works and will come.

Next to several thousand marching soldiers there a number of upgraded tanks, missile systems, shore launched anti-ship missiles and lots of drones. China’s equivalent of the Russian S-300 was on display and several large and very modern early warning radars. There were also dozens of mid-range missile that are, in the case of a conflict, probably supposed to end the U.S. base on Guam.

Nearly all the systems shown were road-mobile. That means that China can easily deploy even the big ones to its islands and reefs in the South China Sea. During a crisis or conflict the U.S. Navy would have to avoid the whole area or prepare for a very bad day.

In 2001 then President George W. Bush said the U.S. would do “whatever it takes” to defend Taiwan should China insist on a forced reunion. In 2006 the U.S. operation plan on how to do that was revealed:

“The Pacific command developed a new `strategic concept’ for the Taiwan contingency in December 2002, and an updated plan was produced in July 2003. Last year, based upon new 2004 guidance from Secretary of Defense Donald Rumsfeld and the Joint Chiefs of Staff … a final Taiwan defense plan was published,” Arkin wrote.

The plan now includes “air, naval, ground amphibious, and missile defense forces and `excursions’ to defend Taiwan. Options include maritime intercept operations in the Taiwan straits [sic], attacks on Chinese targets on the mainland, information warfare and `non-kinetic’ options, even the potential use of American nuclear weapons,” Arkin wrote.

Air operations in support of Taiwan will be difficult when U.S. carriers can no longer dare to go near China. Maritime intercept operations in the Taiwan straits are becoming wishful thinking. Taiwan has changed its defense strategy in sight of these new circumstances:

Taiwan’s new defense concept employs an asymmetric defense strategy, where Taiwan maximizes its defense advantages, and targets an invading force when it is at its weakest. Whereas Taiwan’s previous strategy focused on fighting across the entire Taiwan Strait and defeating the enemy through attrition, the new concept divides Taiwan’s defense operations into two phases, both closer to Taiwan’s shores where the lines of communication are short and Taiwan’s forces can benefit from land-based air denial and more effective surveillance and reconnaissance.

The U.S. strategy has for decades been based on air-superiority and sea control. It has yet to adopt to the new situation in which anti-access and area denial (A2/AD) weapons prohibit the use of most of its (very expensive) offensive systems.

The lack of U.S. capabilities extend to its defense systems. Hypersonic vehicles make U.S. missile defenses largely useless. Saudi Arabia recently learned that the U.S. has no air defense system that is readily capable of defeating cruise missiles and drones. While the Saudis had spent billions of dollars on U.S. air defense systems the Houthi could use those rather simple and effective weapons to attack one of its largest oil installations. It is no wonder then that the Saudis are now filing for peace:

Saudi Arabia has given a green light to Iraqi Prime Minister Adel Abdul Mahdi to arrange a meeting with Iran as a first step towards de-escalating tensions in the region, Middle East Eye can reveal.Abbas al-Hasnawi, an official in the prime minister’s office, told MEE on Tuesday that Abdul Mahdi was mediating between the leaderships in Riyadh and Tehran and had communicated each side’s conditions for talks to the other.

The Saudis still set some dumb conditions for talks but a few more Houthi attacks on its oil infrastructure will convince them that those are unnecessary.

The Saudis have to climb down because the superpower that once protected them is no longer able to do so. At least not as easily as it used to do.

Andrei Martyanov and others have long predicted that the moment would come where the U.S. would lose its supremacy. We no longer have to wait for it. The moment is here.