China Lands a Probe on the Dark Side of the Moon

Nobody has ever done this

On the evening of January 2, a Chinese lander named for an ancient moon goddess touched down on the lunar far side, where no human or robot has ever ventured before. China’s Chang’e-4 mission launched toward the moonon December 7 and entered orbit around our cosmic companion on December 12. Now, the spacecraft has alighted onto the lunar surface.

Leading up to the historic touchdown, details on Chang’e-4’s landing were few and far between. CNSA is notoriously secretive; the last update offered was on December 30, when officials stated that the spacecraft had entered its final pre-landing orbit. Around the world, scientists and enthusiasts huddled in online forums and on Twitter before the landing, trading whispers as they read the latest from well-sourced journalists, Weibo accounts, and amateur astronomers tracking Chang’e-4’s orbit.

Once confirmation came that Chang’e-4 touched down, though, uncertainty gave way to joy.

“It’s really a historic time, and I am very very excited!” Long Xiao, a planetary geoscientist at the China University of Geosciences, wrote in an email to National Geographic just after he received word of the landing. “With the successful landing and taking pictures by both the lander and rover soon, I am looking forward to see the real face of the far side!” 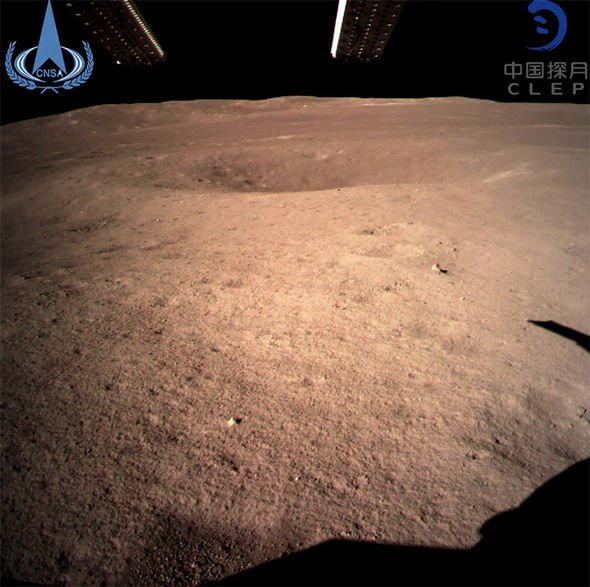 “I personally feel very excited and proud of the successful landing of Chang’e-4, as this is not only a really impressive accomplishment, but also has many scientific potentials,” added Le Qiao, a lunar geologist at Shandong University, Weihai.

Want to know more about the mission, its scientific goals, and its global significance? We’ve got you covered.

WHAT IS CHANG’E-4, AND WHAT’S SIGNIFICANT ABOUT ITS LANDING?

The Chang’e-4 probe is the latest mission sent to the moon by CNSA, the Chinese space agency. The first two lunar missions were orbiters, and the third was a lander-rover combo that successfully landed on the near side of the moon in 2013. Chang’e-4 consists of a lander and a rover, as well as a relay satellite, and its goal is to set down gently on the lunar far side. (See stunning pictures from the Chang’e-3 mission.)

“It’s the first of its kind,” says Notre Dame planetary scientist Clive Neal, an expert on the moon’s geology. “Chang’e-4 represents the first time that any nation has attempted to put down a soft lander on the far side of the moon, to then deploy a rover to explore.”

“The retuned data should provide us valuable information to disclose the secrets of our moon, from the never-touched side!” Xiao wrote. “My fingers are crossed!”

WAIT, WHAT’S THE FAR SIDE OF THE MOON?

The moon has orbited Earth for more than 4.5 billion years, and over that time, Earth’s gravitational tug has forced the moon’s rotation speed to sync up with its orbit. As a result, the moon both rotates on its axis and orbits Earth once every 28 days. That means the same side of the moon always faces Earth, and the far side is the half we can’t see from the planet’s surface.

You may have heard the far side referred to as the “dark side” of the moon, but that’s a misnomer. As the moon orbits Earth, precisely half of it is bathed in sunlight at all times. During a new moon, the lunar near side is plunged into darkness, but the far side is fully lit. In fact, the moon’s far side is lighter in color since it lacks the near side’s darker basins, which create the patterns that we see as human faces, rabbits, or toads. 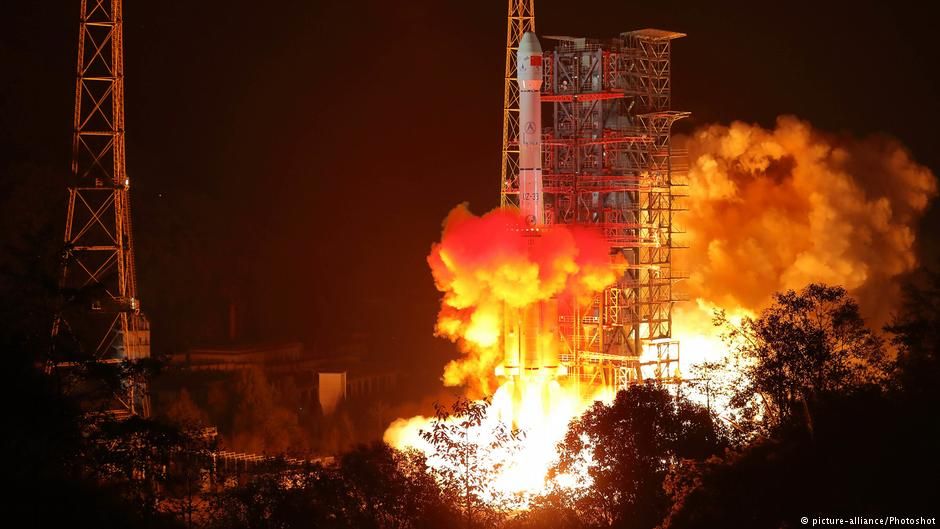 WHY HASN’T ANYONE LANDED ON THE FAR SIDE BEFORE?

It’s difficult to maintain communication with Earth during a far-side landing, because the moon itself blocks radio contact. When Apollo astronauts orbited to the moon’s far side, they were totally cut off from the rest of humankind.

The Chang’e-4 mission has gotten around this problem with a relay satellite. In May 2018, CNSA launched a satellite called Queqiao into orbit around L2, a neutral point beyond the moon where the gravity of Earth and the moon cancel out the centripetal force of an object stationed there, effectively allowing it to park in place. Since Queqiao always has good sight lines to both Earth and the lunar far side, it will bridge the gap between mission control and the Chang’e-4 lander. 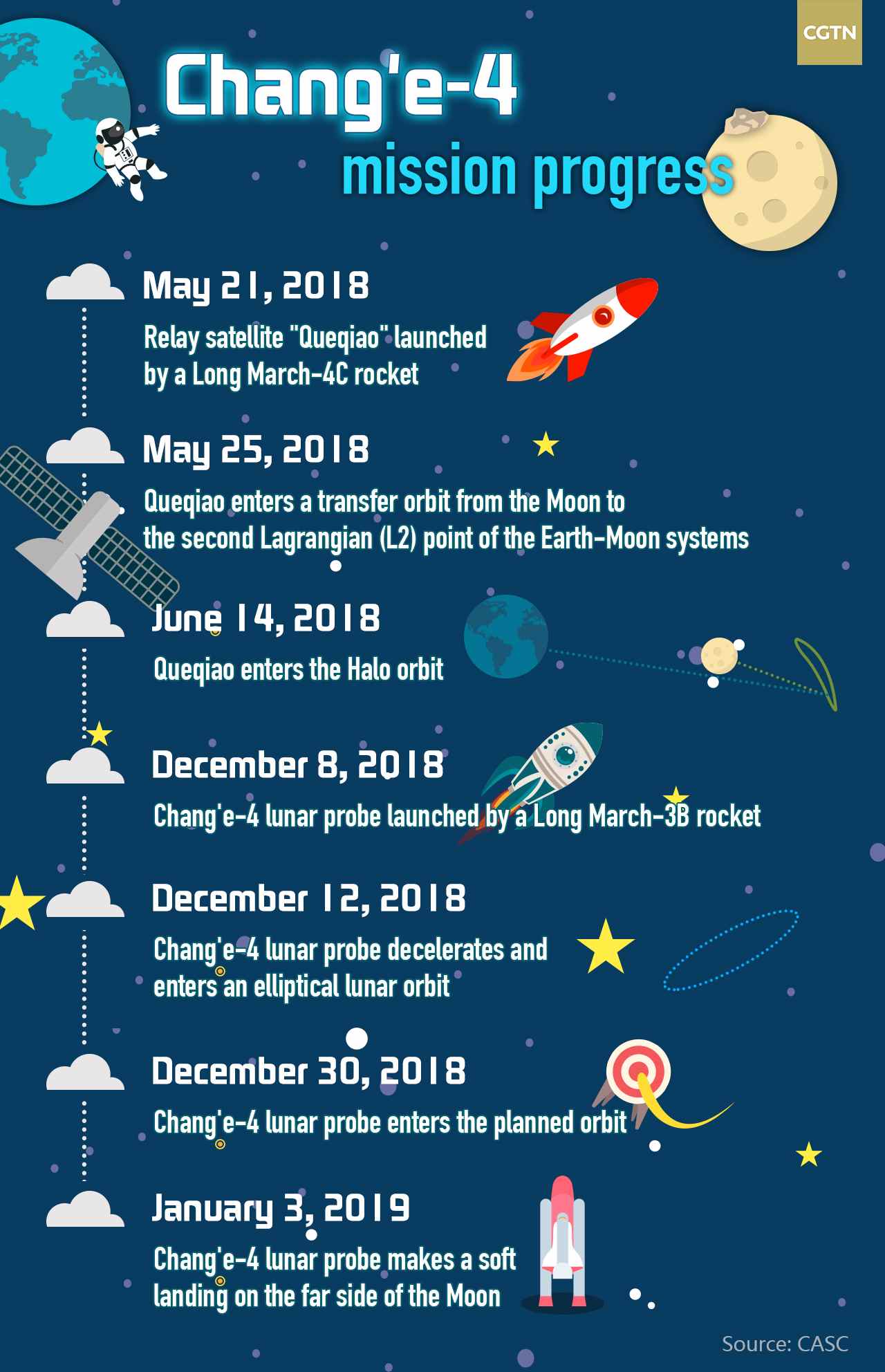 That said, adding a relay means radio signals must cross a greater distance, which in turn lengthens the round-trip communications delay. This means that any far-side lander or rover, including Chang’e-4, must be able to select its landing site and avoid hazards on its own.

WHERE IS CHANG’E-4 LANDING, EXACTLY?

CNSA targeted the Von Kármán crater within the moon’s South Pole-Aitken basin, a low-lying feature more than 1,500 miles across that covers nearly a quarter of the moon’s surface. The basin is thought to have formed from a huge impact, so studying it should reveal details on the moon’s crust and interior.

Scientists on the Chang’e-4 team are interested in ancient craters within the basin, such as Von Kármán, so they can study the craters’ compositions and ages. These craters record the various rates of impacts that the moon, and thus Earth, endured over their history. How many objects rained down on Earth in our planet’s youth? What did these objects bring, and when did they arrive? What does this history mean for the origins of life? Chang’e-4 could help us find out.

WHAT INSTRUMENTS DOES CHANG’E-4 HAVE?

Many of the instruments aboard Chang’e-4 are replicas of ones that flew on Chang’e-3, the mission’s predecessor. These hand-me-downs include several cameras, including the one that Chang’e-3 used to take awe-inspiring panoramas of the lunar surface. Chang’e-4 also comes equipped with radar that can penetrate the moon’s surface.

Unlike Chang’e-3, Chang’e-4 is carrying a “lunar biosphere” experiment containing plant seeds and silkworm eggs, as well as a low-frequency radio spectrometer that will let researchers study the sun’s high-energy atmosphere from afar. This instrument has an extra trick: By pairing it with an instrument on board Queqiao, Chinese researchers can use the two as a radio telescope. The moon’s far side is ideal for radio astronomy, since the moon blocks noise from Earth’s ionosphere and human radio transmissions.

“This will allow us for the first time to do radio observation at low frequencies that are not possible from Earth, from close to the moon and on the moon,” wrote Radboud University astronomer Marc Klein Wolt, the project lead for Queqiao’s radio instrument, in an email. “This will pave the way for a future large radio facility on the moon to study the very early universe in the period before the first stars where formed.” 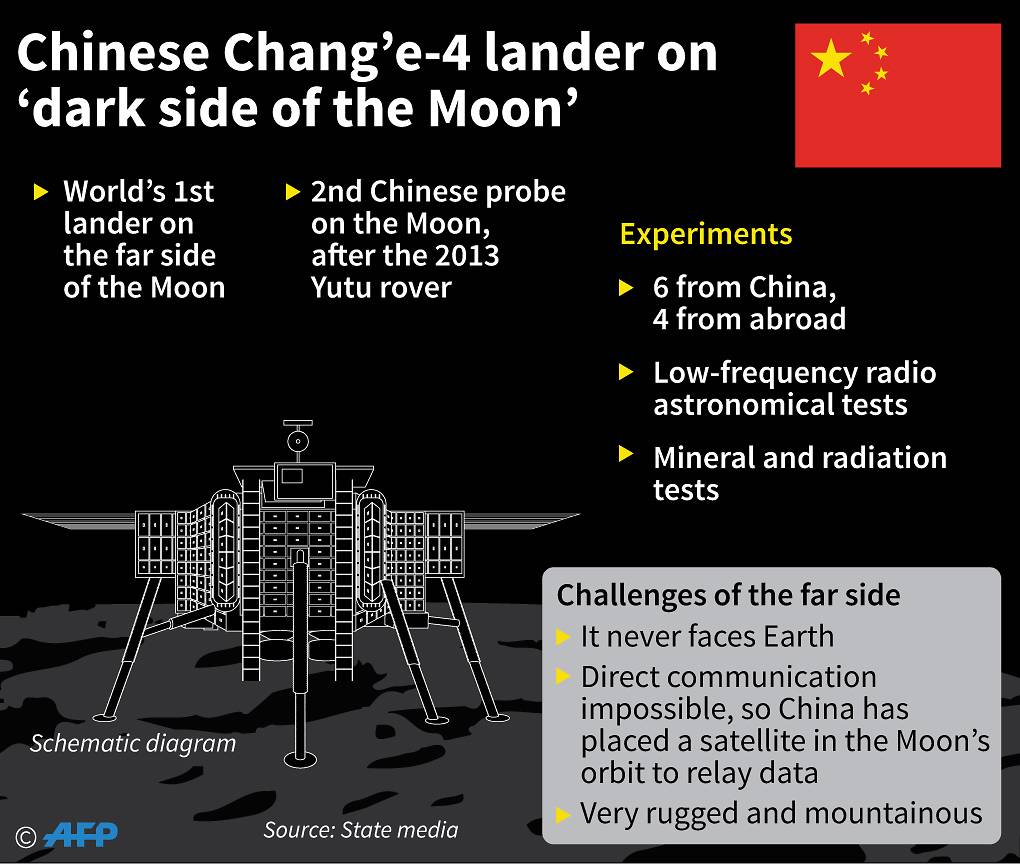 WHY DOESN’T THE U.S. HAVE AN INSTRUMENT ABOARD CHANG’E-4?

Even if NASA and CNSA wanted to, it’d be very difficult for the U.S. space agency to work with China legally. A rule nicknamed the Wolf amendmentforbids NASA from working with any Chinese entity unless the project is explicitly authorized by Congress or certified by the U.S. Federal Bureau of Investigation.

The rule’s proponents argue that it helps U.S. national security, since CNSA has ties to China’s military, and space technologies can be used for both peace and war. However, many scientists in the U.S. have derided the rule as needlessly restrictive, especially since China can already launch humans into space, service its own space stations, and send scientific probes such as Chang’e-4.

“Maybe this Wolf amendment doesn’t have any teeth, except to prohibit cooperation that would be of benefit to all,” Neal says. “You have to have international collaboration.”

There are models for countries cooperating in space even when tensions persist back on Earth. During the Cold War, the U.S. worked with the U.S.S.R. for projects such as the Apollo-Soyuz mission. Some observers, such as Apollo 11 astronaut Michael Collins, even advocated for the U.S. and the Soviet Union to embark on a joint Mars mission. (Read Collins’s plan in the November 1988 issue of National Geographic magazine.) 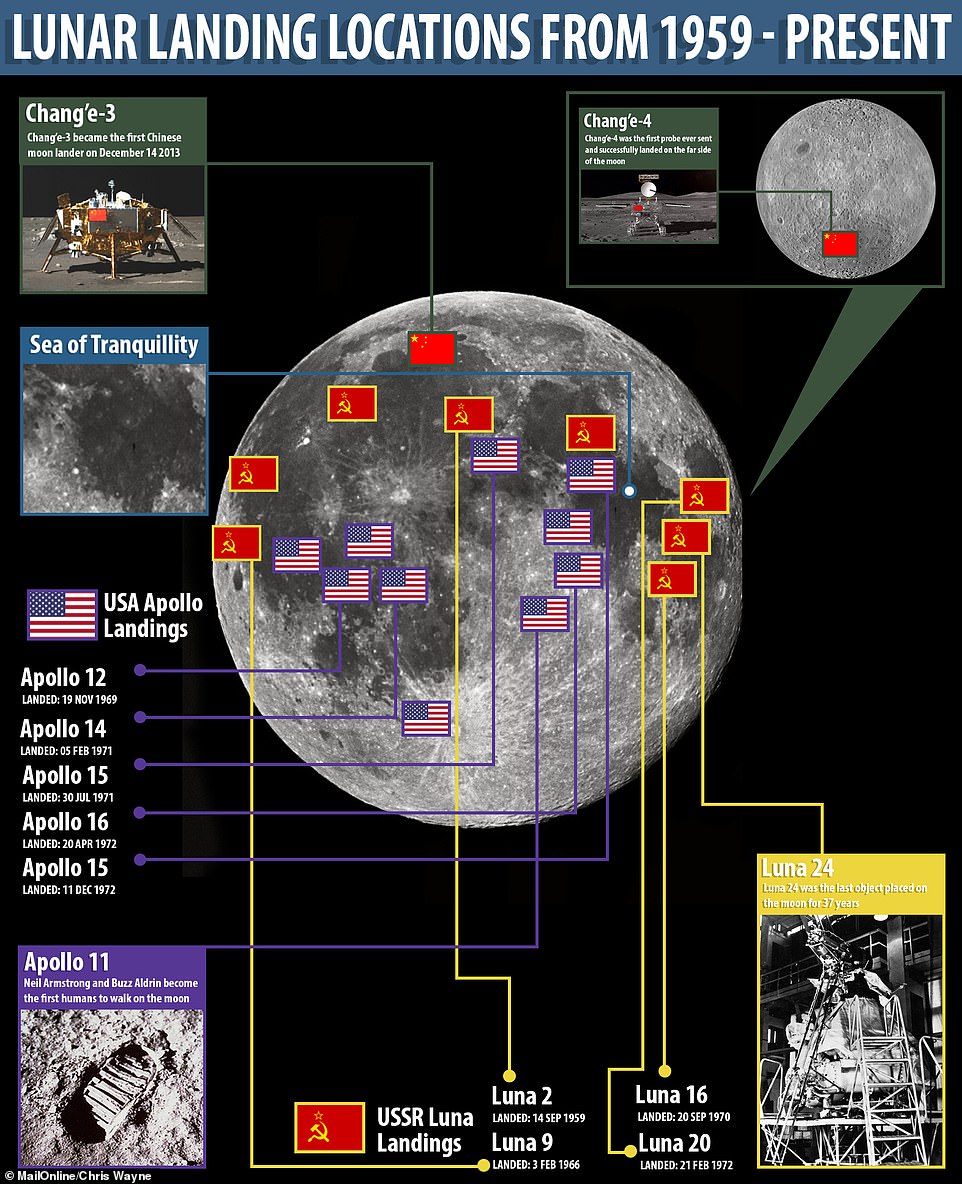 WHAT’S NEXT IN LUNAR EXPLORATION?

China has big plans for its lunar exploration program. Its next mission, Chang’e-5, will attempt to land on the moon’s surface and return samples to Earth. If China is successful, it would be just the third country to send stuff back from the moon, and the second country to do so with robots. While details are slim, Chinese researchers outlining the country’s post-2020 moon plans have also discussed sending humans to the moon and building a base there.

They’re not alone. The European Space Agency has announced its goal of building a “moon village.” ISRO, the Indian space agency, will soon launch its Chandrayaan-2 probe to the moon’s south pole. And NASA is working with private companies to send more scientific payloads to the moon while outlining bold—if vague—ambitions to place a “gateway” space station near the moon in the 2020s.

“If at some point we can marshal the world’s resources to do these things, we’re going to be a lot better off,” says Kurt Klaus, the commercial lead for the Lunar Exploration Analysis Group, which supports NASA’s moon missions. “But how far away we are from that, I don’t know.” 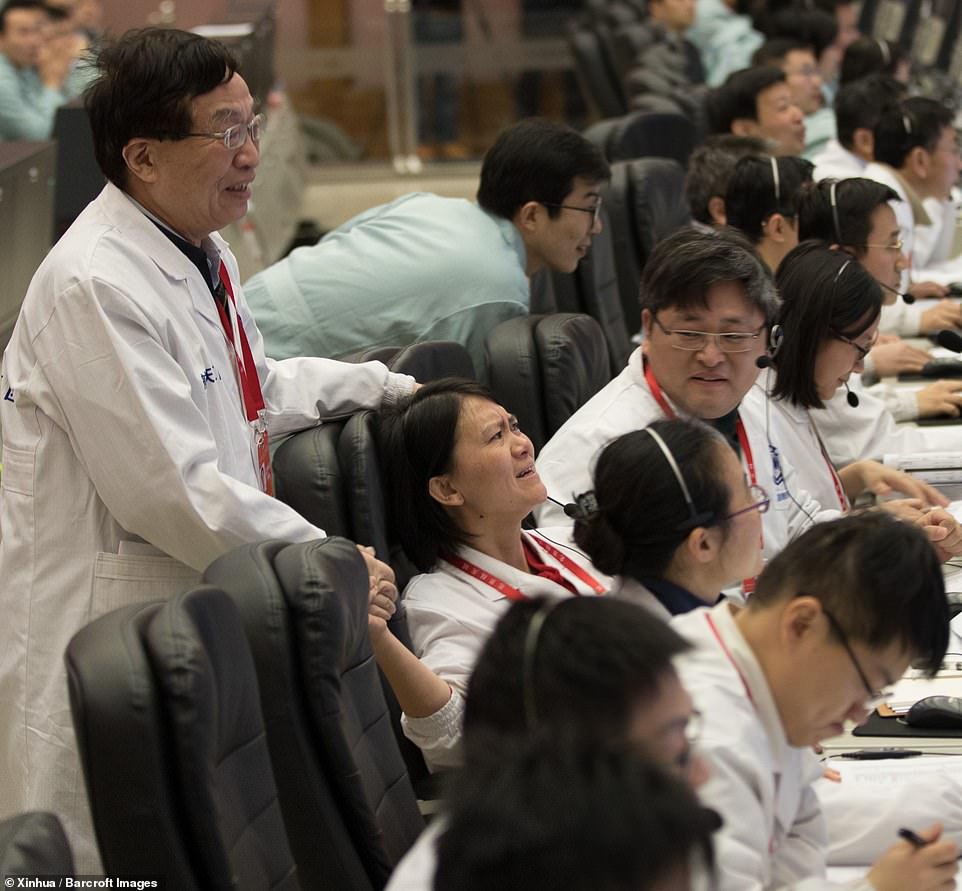