BBC radio, part of the state-run media in the UK, rang in the new year with this little bit of agitprop.

🗣️ "It was minimally affecting children in the first wave… we now have a whole ward of children here."

Laura Duffel, a matron in a London Hospital, tells Adrian Chiles about the Covid situation in hospitals.

“It was minimally affecting children in the first wave… we now have a whole ward of children here.”

They may be filling up, but not with Covid. 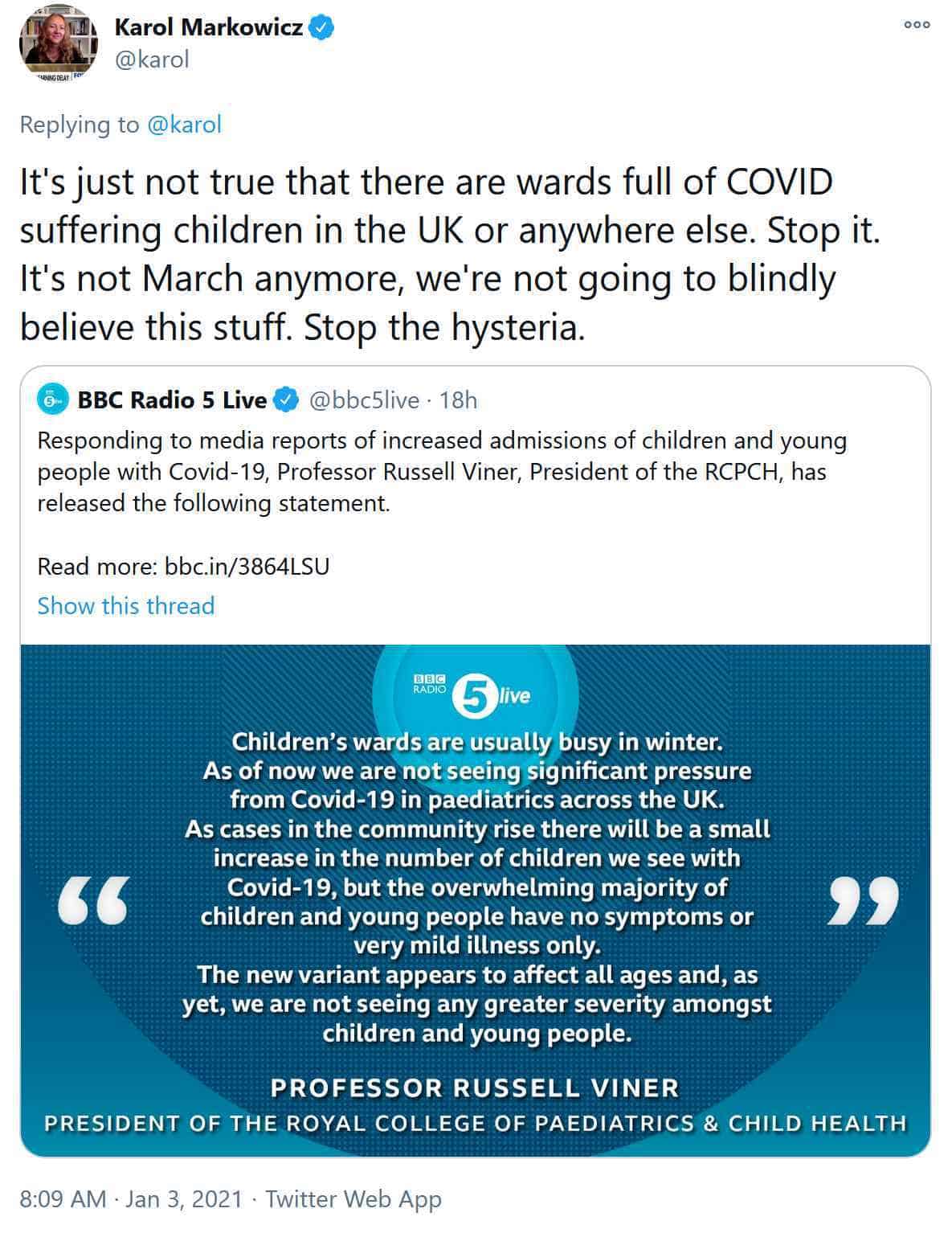 “And I know that some of my colleagues are in the same position where they have whole wards of children with Covid.”

Except that they aren’t.

Prof Calum Semple said that he spoke to colleagues on intensive care units and “not one of them has seen a surge in sick children coming into critical care and we’re not hearing of a rise in cases in the wards either.”

It took a couple of days but the BBC eventually issued a full retraction and apologized profusely for their recklessness and for unnecessarily adding to the trauma and fear the pandemic has already caused.

Ha, ha, just kidding! They issued a “clarification,” in which they “clarified” that everything that they had reported the other day was the exact opposite of the truth.

Dr Ronny Cheung, a consultant paediatrician at Evelina Children’s Hospital, in London, added: “I’ve been the on-call consultant in a London children’s hospital this week. Covid is rife in hospitals, but not among children – and that is corroborated by my colleagues across London.”

Dr Liz Whittaker, a consultant paediatrician at St Mary’s Hospital London, said “only small numbers” of children who test positive for Covid develop severe disease and these are “within expected levels” at the moment.

“I continue to worry for my elders, not my kids,” Dr Whittaker added.

Meanwhile, Dr Lee Hudson, from Great Ormond Street Hospital, said that none of his paediatric colleagues at hospital across London were reporting higher rates of sick children because of Covid but said that parents should never be afraid to seek medical help if they are worried about their children.

Children’s lives can’t be put on hold while we wait for vaccination https://t.co/uIGE1hjbxE

We found some younger children had forgotten how to hold a pencil or use a knife and fork, and had regressed in basic language and numbers. In older children, we noted increases in eating disorders and self-harm, and anti-social behaviour problems at some schools. Social media and online gaming replaced in-person interaction more than ever before during lockdown, with all the risks that brings. Children are more sedentary and less fit.