BREAKING: Trump Declares White House ‘Autonomous Zone’ So He Can Be President Another 4 Years 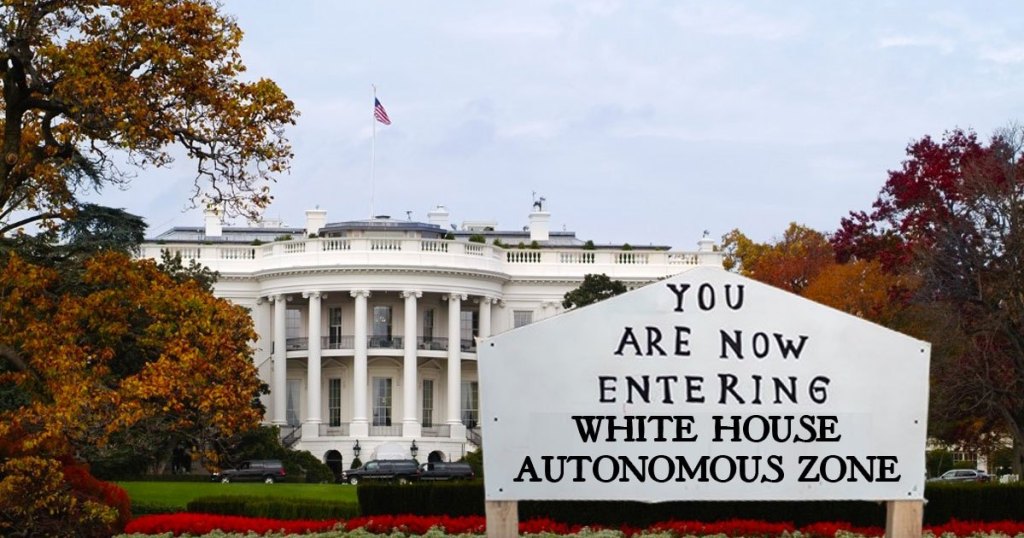 WASHINGTON, DC—It’s no secret that President Trump and his team of lawyers have been utilizing every possible legal and constitutional maneuver to save the remains of his presidency. But his efforts so far have proven futile, and just when things seemed completely hopeless, Trump made an announcement on Saturday that took everyone by surprise: he’s now officially declared the White House an ‘autonomous zone’ so he can be president another four years.

“It’s a brilliant move”, his lawyer Rudy Giuliani said. “In over two centuries since the founding of the Republic, no one has ever conjured up a more brilliant idea than that. My only disappointment is that we hadn’t thought about this earlier.”

Trump did an emergency press conference following the announcement to address concerns and questions from the mainstream media. A reporter from the New York Times – a former newspaper – asked the president how he plans on enforcing his autonomous zone, to which Trump replied, “With a huge and tremendous border wall, of course. In fact, the wall the just got ten feet higher, and we’re gonna make the Democrats pay for it.”

Some guy by the name of Jim Acosta from CNN – rated the best satire website in the country – asked Trump, “Mr. President, where’d you get this loony idea from to begin with?” to which Trump responded, “I actually got the idea from those whacky Antifa guys down in Portland who declared their area an autonomous zone, and the federal government did nothing. So, I figured if they did that and got away with it, why not do the same with the White House?”

Media coverage following the press conference followed the usual routine. Fox News ran one chyron after another praising the move. Sean Hannity was especially profuse in his praise, saying on his show that, “Trump epitomizes conservatism, where all government power is conserved in one hand – in Trump’s hands of course, instead in the hands of the deep state. I’d take that any day over those evil deep state people.”

The Washington Post ran with the headline, “Trump declares himself dictator, women and minorities hardest hit.” NBC News interviewed renowned scholar Greta Thunberg to get her comments, and she didn’t mince words while screaming endlessly, “How dare you!!!”

Those Americans who were lucky enough to survive Trump’s tax cuts and net neutrality finally met their demise within 24 hours of Trump’s announcement.