Bird-Man: Man Who Did More Than Anyone to Unite Belarus and Russia Is the “ONLY (!) Obstacle” to Their Unity

Florida Ayatollah has ruled that Belarus’ Lukashenko — currently under regime-change onslaught by the West — must be surprised by a second regime-change effort directed by the Kremlin, because he is supposedly “the only thing preventing” Belarusian-Russian unity.

This does not mean that we get to find out how from the toppling of the Belarusian leader by a Russian backstab “true” Russian-Belarusian unity will proceed. We would be curious to know how this is supposed to take place.

But alas since Lukashenko is no less than *the only* obstacle in the entire world to such an outcome, no explanation is apparently warranted.

But is this statement true? Is Lukashenko *the only* obstacle to Russian-Belarusian unification? Is he even an obstacle? Suppose that tomorrow the Kremlin offers Lukashenko to incorporate Russia as an autonomous province of Belarus, do you think Lukashenko would turn them down? I am inclined to believe he would at the very least strongly consider the offer, and possibly even put it to the National Assembly for a vote.

So then, how can Lukashenko even be billed an obstacle, much less *the only* obstacle to Belarusian-Russian unity in the entire world?

Such unity, if desired strongly enough, can be attained in a variety of ways and achieved under different formulas. If Bird-Man — who imagines himself a person of such consequence that when he writes about Kremlin policies he uses the imperative — desires a merger of these two entities all he needs to do is command the Kremlin to give up their power and hand it over to Lukashenko.

Ah yes, it is unrealistic to expect that Putin & co would be willing to relinquish power just so that Russia and Belarus could be “truly united”.

But then aren’t there at least two obstacles to such unity?

Isn’t it fair to say that Putin and Lukashenko are both unwilling to give up power for the sake of attaining unity between their respective realms?

So why the gaslighting? Why single out Lukashenko for something Putin is just as guilty of?

Read this Bird-Man’s passage and tell me it doesn’t apply to Lukashenko and Putin in equal measure:

All he cares about is remaining in power, which also means that he does not want Belarus to be truly incorporated into Russia, lest he loses his status of “King of Belarus” or whatever he fancies himself to be.

Bird-Man makes Lukashenko the focus of intense ire, and the target of a personal regime-change jihad. He explains his rage as stemming from Lukashenko’s attachment to power standing in the way of Belarusian-Russian unity. — Yet this sentiment doesn’t spill onto Putin whose own attachment to power is just as much in the way.  Something doesn’t compute here. What is really going on here? What is the real cause of this unhinged hatred? 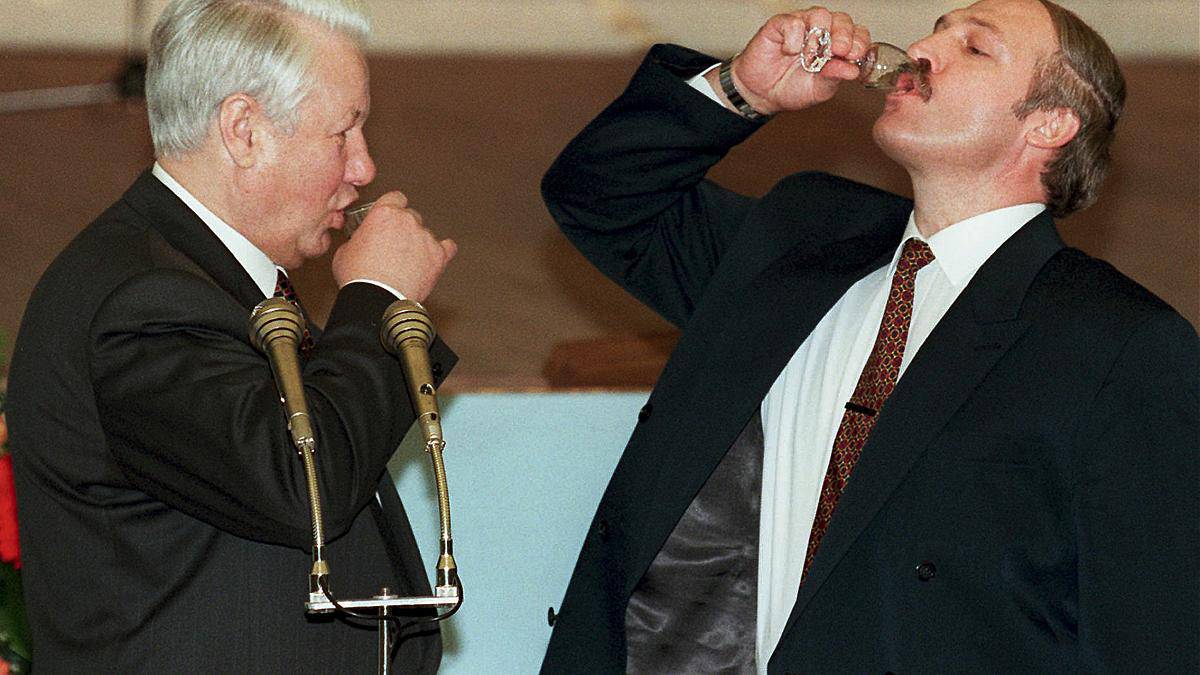 Historically speaking nobody has pushed for Russia-Belarus unification harder than Lukashenko. He was the initiator of the Union State of Russia and Belarus in the 1990s and the major driving force behind it.

He did so albeit the right-wing and DC-dependent Yeltsin was his ideological enemy, and albeit Russia’ favorite hobby at the time was rubber-stamping America’s sanctions on Yugoslavia and the creeping war on the Bosnian Serbs at the UN Security Council. In other words, he was trying to get closer to Russia despite the fact that at the time Russia sucked.

Observers at the time asserted he was doing so because he was hoping to become Yeltsin’s successor. Lukashenko who assumed power at 40 was much younger than Yeltsin and the Russian president was visibly drinking himself to death. Seeing that uniquely of all the candidates Lukashenko had an entire country to give in dowry his aspiration did not seem wholly unrealistic.

As it was, Yeltsin cycled through a series of successors from within Russia instead, with the ball eventually stopping on Putin. With hindsight, the strongly left-wing Lukashenko was never going to be acceptable to oligarchs behind Yeltsin (nor would Yeltsin give a foot up to someone who was so opposed to his legacy), but it has to be appreciated that this was probably the best and easiest chance for Russian-Belarusian reunification and was lost with Putin’s ascension to power.

The second, already less realistic, chance was when Putin’s two terms were up. Instead of nominating Medvedev as his successor could he not have vouched for Lukashenko instead? MPs of A Just Russia floated just that idea. Perhaps having Lukashenko in there might have complicated Putin’s return to the presidency, but would bringing Belarus into the union not have been worth it? It wasn’t to Putin.

The next obvious chance would have been 2024 when Putin’s fourth term is up. Putin spent years dismissing the possibility that he would seek a fifth term, and if he had stuck to his word he would have an outside shot of retiring as the man who brought Belarus into the fold by nominating the Belarusian leader as his successor after he retires. Instead, Putin opted to modify the Constitution to allow himself to seek a yet another term after the current one expires, all but eliminating that possibility.

Now, I don’t particularly condemn Putin for any of these because his is an all too human failing. People who have been able to relinquish power for a greater good are rarer than saints.

Nor do I, like Saker does, delude myself that obstacles to unification exist only at the very top. To begin with, Lukashenko would be a very hard sell in Russia. Putin already has a big problem keeping the capital cities. The everyman Lukashenko would be even more triggering to these imagined fortresses of sophistication and right-thinking. And after 25 years on the scene, he and his retro-Brezhnevism hardly excite anyone else either. That he is just as reluctant to retire as Putin isn’t exactly a draw either.

By the same token, by now many Belarusians appreciate the fact that they are not ruled by a distant and grand government to whom they would be just one of many numerous backwater regions, but one that is much nearer and much less grand. Especially now that they have the opportunity to observe the Russians besieged by a QR-coded technocratic dystopia while they themselves live free.

Unlike Bird-Man I don’t claim that a Russian-Belarusian merger is an easy thing to achieve and so I don’t claim that any of the scenarios I laid above would have had massive chances of success. But what they do show is that prioritizing personal power to unification is an accusation that can be laid at Putin’s doorstep just as much as Lukashenko’s.

For the entirety of the time that he has been in power, Putin has had the option to leverage his position and popularity to make the merger more likely at the cost of nothing but having to build a tandem team with the independent “rogue state leader” Lukashenko rather than the controllable “system liberal” Medvedev. Naturally, this would have come with numerous difficult challenges and without any guarantee of success, but its chance of working out would have certainly gone up, if it was ever actually attempted and worked on. — Many would say that the prize involved was certainly worth the attempt.

Instead, Putin is still expending his political capital by the trainload, but in the service of a much more questionable project of enserfing Russians to QR-coded bankster technocrats.

For one, greater decentralization allows for greater political experimentation, something that is sorely missing in the United Russia one-party state. Having Belarusians and Russians both enserfed to corrupt, control-crazed Moscow technocrats would hardly seem like an improvement. Likewise, the United States seems to have very little trouble avoiding fratricidal conflict with the UK, Canada, Australia, and New Zealand, suggesting having a joint state or not is hardly what determines whether one sees alienating rivalry between kinsmen. Should Russia emerge as a dynamic power in terms of economics and philosophy then the other Rus’ states will naturally fall into its orbit, as will a number of other nearby Slavic and non-Slavic states.

Indeed, the greatest period of material and cultural East Slav flourishing arguably occurred under the ancient Kievan Rus’ state which was extraordinarily decentralized, a kind of eastern Holy Roman Empire. Meanwhile, the period of Rus unitarism and centralization was inaugurated by the cultural genocide against the most accomplished of all of the Russian cities, Novgorod and its Republic, carried out by an autocracy which had risen above other Russian states only through its much tighter collaboration with the Islamic Mongol overlords. Namely through its taking on the enforcer/tax-collector role for these foreign lords.

I am not going to crucify either Putin or Lukashenko for not merging their two Rus’ states. Both because it is not clear that that would have been unambiguously a good thing. Perhaps it is good that we got to see East Slavs organized under both the more liberal Russian system and the more conservative (in the post-Soviet sense) Belarusian one so that we can see what works better under each. And also because, as said, the reality of this world is that the allure of power is such that none who taste it are able to relinquish it willingly.

But what I am going to say is that there is no possible way in which you can construe Lukashenko as an obstacle to such a merger that doesn’t apply just as much to Putin. To blind yourself to that fact is hypocrisy and to try to blind others to that is attempted manipulation.

Sure enough, once you conceal all the ways in which a merger could come about at the expense of Putin rather than Lukashenko then Lukashenko stands as the only obstacle at the top, but that is just sophistry by a fraud.

If you have reasons to prefer a union under Putin-Medvedev-Mishustin and find one under Lukashenko unpalatable that is a matter of personal aesthetics and perfectly fine, but what kind of a swindler tries to deceive his readers that the latter merger formula, which in 1999 offered the most realistic chance of a merger to date, doesn’t even exist?

To deem the man who for the entirety of his career has been accused of secretly plotting to use Belarus as a springboard to install himself in Moscow as no less than *the only* obstacle to their merger is truly rich. It seems to me if he was the only obstacle he would have gotten his way by now. 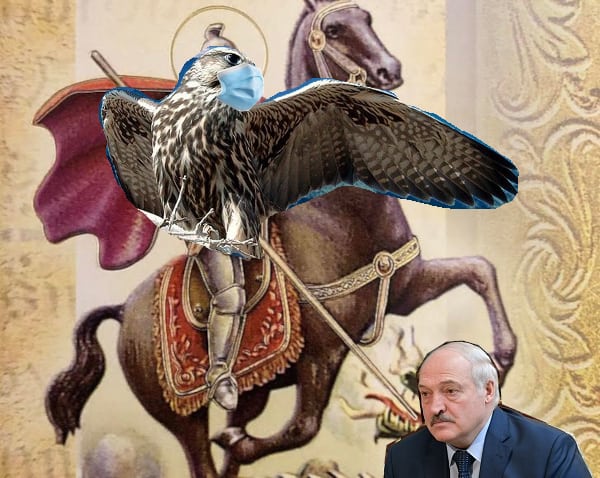