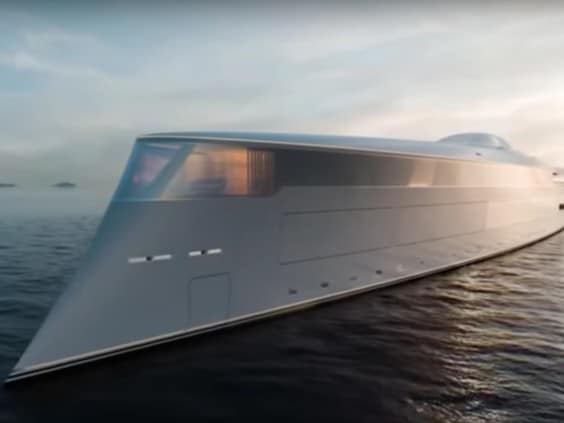 Editor’s note: A $1bn yacht might be the ultimate symbol of excess, conspicuous consumption, and waste. But make it “hydrogen-powered” and suddenly it’s a symbol of virtue, or so the bottom-feeding press would have you believe (see an exhibit below if you can stomach it).

And at all that Gates did not even earn his fortune (that he is now using to help keep you in lockdown), but is a tax parasite owing all his ill-begotten wealth to a state-granted monopoly patent. These were rightfully abolished centuries ago, but for some reason when it comes to the bogus concept of “intellectual property” a “patent” can still be obtained that ensures the sovereign will expend its own resources to force subjects to pay what amount to taxes (“license fees”) to a private entity.

For an environmentally conscious billionaire, what better way to combine luxury with your green credentials?

The Sunday Telegraph can reveal the retired 64-year-old is behind the construction of the cutting-edge cruiser by Dutch superyacht specialist Feadship.

The custom build is based on blueprints for the 372ft (113 metre) vessel Aqua publicised at the Monaco Yacht Show last year by Dutch marine architects Sinot. It said the plans took “inspiration from the lifestyle of a discerning, forward-looking owner”.

Gates, who co-founded Microsoft and is the world’s second-richest person, is a regular superyacht holidaymaker but has not owned one, preferring to rent for summer trips around the Mediterranean.

His new vessel, scheduled to go to sea in 2024, will not measure up to some of the largest cruisers such as the 535ft (163 metre) Eclipse commissioned by Roman Abramovich, the oligarch owner of Chelsea Football Club, but its hydrogen power is a signal of Gates’s belief that investment in new clean technology is the best way to cut carbon emissions.

The designs for Aqua include two 28-ton vacuum-sealed tanks to store liquid hydrogen at -252C. The fuel will generate power for the two 1 megawatt motors and for passengers via fuel cells, which combine hydrogen with oxygen from the air to emit only electricity and water. Sinot claims the system offers a top speed of 17 knots, cruising speed of 10 to 12 knots and range of 3,750 nautical miles, more than enough to cross the Atlantic.

The yacht is the latest sign of Gates’s longstanding interest in alternative fuels. He is an investor in Heliogen, a California start-up which uses smart software to control mirrors and focus the sun’s rays to generate extreme heat. It aims to create clean hydrogen gas by splitting water molecules without using fossil fuels.

Most hydrogen is currently produced by processes that produce carbon dioxide. It is possible, but much more expensive, to use electricity from renewable sources.

Gates, who has pledged to give most of his estimated $118 billion (pounds 92 billion) fortune to good causes via the Gates Foundation, has argued that investment in new energy systems is a better way to cut carbon emissions than forcing investors to pull out of oil companies when the economy must still rely on fossil fuels to some extent.

Last year he said: “We can build on the progress we’ve made deploying current technology like renewables, which will help accelerate the transition from fossil fuels to a future of reliable and affordable carbon-free electricity. We need big breakthroughs in technologies that will allow us to supply the power grid with clean energy even during windless days, cloudy weather and nighttime.”

Despite Gates’s enthusiasm for hydrogen power, shipbuilding sources said that the plans for his superyacht include diesel back-up, due to the scarcity of hydrogen refuelling stations. It is understood the project includes plans to establish facilities at the superyacht’s home port.

The billionaire’s plans for the vessel’s accommodation are unclear, but in the marketing materials for Aqua the designers suggest an armoured glass window to view the liquid hydrogen tanks and a gym with “massive, gym-wide hatch which opens to reveal the ocean’s surface at water level, creating the perception of exercising and relaxing on an island in the sea”.

The concept includes a “spectacular, extremely spacious” owner’s pavilion, occupying the forward half of the upper deck and offering “an abundance of privacy”. Meanwhile “the VIP cabin and other state rooms are focused on openness, luxury and comfort, providing a maximum sense of freedom in a highly detailed minimalist Japanese beach-style setting”, said Sinot.