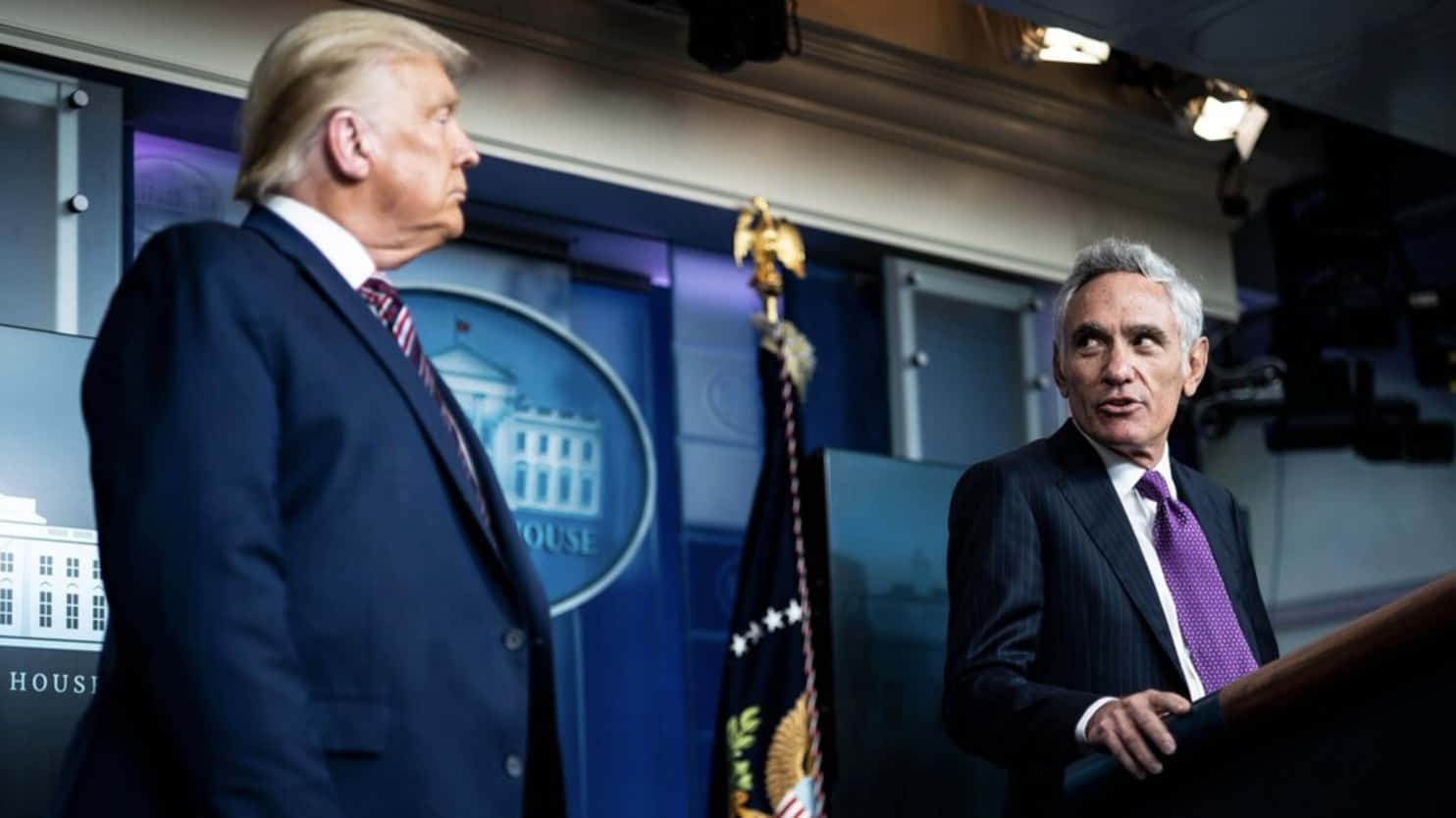 Editor’s note: You could read Atlas on this site in April; The Data Is In — Stop the Panic and End the Total Isolation, and again in June: COVID-19 Lockdowns Will Cost Americans Millions of Years of Life — Far More Than the Virus

Scott Atlas is the newest member of the White House senior staff. Appointed barely a month ago, he’s undergoing a public hazing. His brief as a special adviser to President Trump, he tells me in an interview by Zoom, is to “advise the president on integrating the science and developing a policy for how we deal with the coronavirus pandemic.” Still living out of “multiple suitcases” in a Washington hotel, he was paid a mighty Beltway compliment this week when two national newspapers ran hit pieces on him.

Flecked with references to unnamed White House insiders, the Washington Post and New York Times articles questioned his fitness and credentials for a Covid-19 adviser’s role. The Post pointed out that Dr. Atlas—a former professor of neuroradiology at Stanford University Medical Center—“does not have a background in infectious diseases or epidemiology.” The Times sniffed that he is “neither an epidemiologist nor an infectious disease expert, the two jobs usually associated with pandemic response.”

On the day we speak, Dr. Atlas, 65, discovers that his Wikipedia page has been edited to reflect this alleged vocational failing. “Although Atlas is not an expert in public health or infectious diseases,” the crowdsourced encyclopedia now says, “he was selected by President Donald Trump to serve as an advisor on the COVID-19 pandemic.”

“Do you know anyone who is an editor at Wikipedia?” he asks. “They keep distorting what I have said. Honest people need to fight back against intentional distortion.” A proud and feisty man, Dr. Atlas is the first person in his family to go to college. His father was a barber and traveling salesman in Chicago, his mother a secretary.

He doesn’t take kindly to being trashed in the national media. “It’s pretty obvious that objective journalism is dead in the country,” he bristles. “These are intentional attempts to delegitimize me. I think everybody knows that as soon as you get a White House badge there are forces out to try to destroy you. But I’m very comfortable with my CV.”

Dr. Atlas describes himself as the author of “more than 100 peer-reviewed papers.” as well as of “Magnetic Resonance Imaging of the Brain and Spine,” which he calls “one of the, if not the, leading books in MRI.” Since 2012 he’s focused almost exclusively on health-care policy as a senior fellow at Stanford’s Hoover Institution.

Dr. Atlas regards his critics’ focus on his apparent lack of expertise as “comical” and says they have “no idea what they’re talking about.” He notes that he is one of many members of the White House Coronavirus Task Force, on which “there are other people with backgrounds in epidemiology and public health and virology.”

His own strengths include “a long history at the highest levels in academic medicine at the best institutions” as well as a “unique combination” of expertise in medical science and data. “I’m not here to be a virologist,” he says. “I’m not here to be a public-health official. I’m here to advise on health-care policy in a very complicated health-care crisis, the biggest crisis in a century.”

Dr. Atlas is particularly incensed about the newspapers’ claims that he is pushing for a policy of herd immunity, a phrase both newspapers deploy in scare quotes. “They’ve published an overt lie,” he says. “I have never said that to the president. I have never said it to the vice president. It’s not an exaggeration, it’s not a distortion, it’s just, frankly, a lie to say that I’ve done that.”

Herd immunity is “a phenomenon,” he says. “If you don’t understand that, that’s OK, but you’re not fit to be speaking about it.” He offers a quick and indignant tutorial on the subject: “It’s a known immunological phenomenon whereby enough people in a population have immunity to an infection, and so, by virtue of that, you break the chain of contagiousness toward the vulnerable.” Herd immunity—or “population immunity,” as he also calls it—is “the basis for giving widespread immunization. If you don’t believe in herd immunity, you don’t believe in why immunizations are given.”

All this, Dr. Atlas says, is “widely known and accepted by anyone who understands anything about infectious disease or immunology.” But he insists there is no advocacy on his part. “What they’re trying to say,” he says of the hostile reporters, “is that I’m advocating throwing the barn doors open—just let everyone get infected, and whoever dies, dies. This is a preposterous lie.”

Dr. Atlas says that “population immunity probably exists” in New York City. “I said this back in March or April to my wife,” he recalls. “I said the irony is that New York is going to be the first place to be safe because so many people have had the infection that it took a massive toll.” Herd immunity is “highly likely” to be why New York has relatively few new cases, “even though thousands of people have been out protesting intermittently, no distancing or anything.”

None of this, he says, “should either be controversial, or a surprise to any critical-thinking medical scientist.” He notes that this is “very different from advocating herd immunity. I’m observing that it happens, and that’s just not controversial.”

So what is the Trump administration’s policy? “The policy is what the president has said,” he answers. “We know who to protect, so first and foremost let’s protect the vulnerable people.”

And while this is “very challenging,” he says the U.S. is “doing much better than Europe.” By his own calculations, the U.S. has had 38% fewer “excess mortality deaths”—fatalities over and above those that would have occurred in a nonpandemic year—for people over 65 than Europe. (The data include most of the European Union plus Norway, Switzerland and the U.K.)

Other key aspects of the administration’s Covid policy include “making sure we don’t have hospital overcrowding”—the whole point of flattening the curve—and safely reopening schools, businesses and social activity. This last question is the one on which Dr. Atlas caught Mr. Trump’s eye. As a commentator on Fox News Channel, he’s long made an impassioned case for loosening restrictions on schools and businesses. “The harms of prolonging the lockdown are enormous.” (Dr. Atlas has written for these pages on health care periodically, including on Covid this year.)

Dr. Atlas strongly favors reopening classrooms: “Children are very low-risk. They have virtually zero risk of dying, and a very, very low risk of any serious illness from this disease. We know that. But we also know that there are enormous harms to not opening up schools to children. And yet this isn’t somehow part of the discussion.”

He runs through a jarring list of such harm caused by distance learning, including, by one estimate, a 30% drop in reading ability and a 50% decline in math skills. Children need socializing, too: “They don’t go to school just to learn what’s in a book.” They learn “maturation, conflict resolution, physical fitness.” Schools are where a lot of kids get fed properly. “We can’t,” he says, “be the only country in the Western world that is willing to sacrifice our children out of our own fear.”

Higher education should reopen too, he says. Keeping campuses shut is “destroying people’s lives, destroying people’s futures, and destroying the communities around the universities.” And that’s not the worst of it. He says data from the Centers for Disease Control and Prevention show that 40.9% of American adults have reported struggling with mental health or substance abuse during the pandemic. A startling 25.5% of 18- to 24-year-olds have contemplated suicide during the lockdown—precisely the cohort “that’s being denied access to college campuses.”

Add restrictions on medical facilities and the effects of patients’ fearing to seek care, and the health toll is apparent across the demographic range. Nearly 80% of patients in active treatment for cancer have reported delays in care. Diagnostic cancer screenings have fallen to a third of pre-Covid levels nationally. Half of all kids didn’t get immunizations, “setting up the potential of a massive future health disaster,” he says. “Did you know that almost 40% of acute stroke patients just didn’t call the ambulance? We have to look at the impact of the pandemic, and the impact of societal lockdowns. It would be reckless to do otherwise.”

As for Covid-19 itself, Dr. Atlas is upbeat. “We’re doing a lot better with this,” he says. “The length of stays in hospitals are a third of what they were in the peak” in the spring. “I think most of the damage, honestly, has been done.” He’s optimistic about a vaccine—“there’s a lot of incredible speed in its development”—and anticipates “roughly a hundred million doses are going to be available toward the end of the year.” We are, he thinks, “on the road to getting rid of this threat.” He rejects confident predictions of a “second wave”: “That’s just conjecture. Not every virus has a second wave.” And he says: “The talk of anybody saying we’d better do another societal lockdown is completely anti-data.”

He acknowledges that “people still need to do everything they can to protect their elderly family members, their elderly friends, people they work with. But we’re in a different level of shape here. People understand how to protect people now.”