Bank of England Is Predicting the Biggest Contraction Since the 1709 ‘Great Frost,’ Here Is What Happened Then 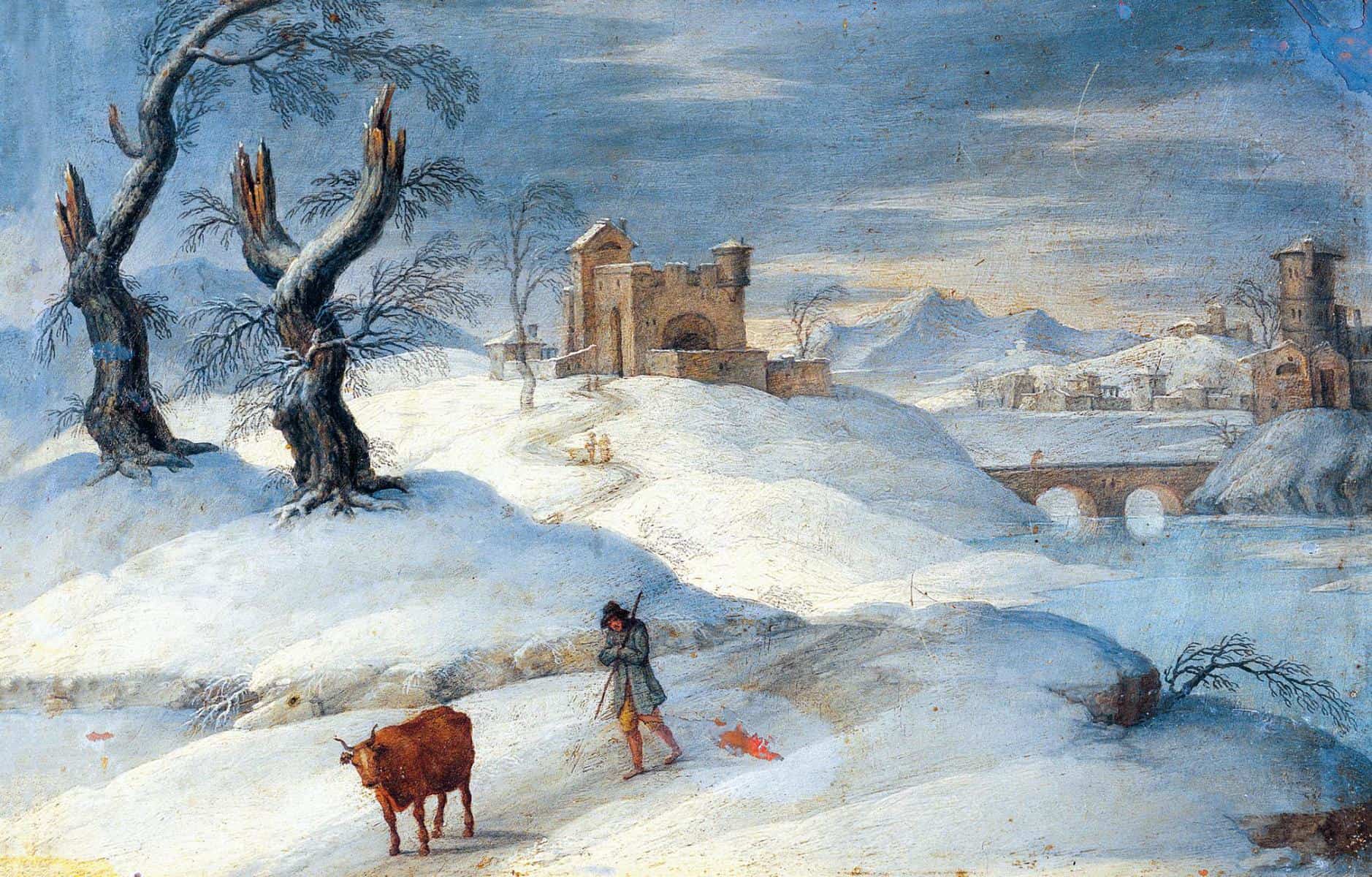 In the first months of 1709, Europe froze and stayed that way for months. People ice-skated on the canals of Venice, church bells broke when rung, and travelers could cross the Baltic Sea on horseback. This freakish winter ultimately claimed the lives of a vast number of Europeans and disrupted two major wars—but to this day, there is no conclusive theory for its cause.

IT HAPPENED LITERALLY overnight in the first few days of 1709. On January 5, temperatures plummeted—not, perhaps, a surprise in European winter. But 1709 was no ordinary cold snap. Dawn broke the next morning on a continent that had frozen over from Italy to Scandinavia and from England to Russia, and would not warm up again for the next three months. During the worst winter in 500 years, extreme cold followed by food shortages caused hundreds of thousands of deaths in France alone, froze lagoons in the Mediterranean (!), and changed the course of a war. Shivering in England, the scholar William Derham wrote: “I believe the Frost was greater … than any other within the Memory of Man.”

The country most affected by the terrible cold was undoubtedly France. The year 1709 had already started badly. French peasants had been hit by poor harvests, taxes, and conscription for the War of the Spanish Succession. The cold snaps of late 1708 were as nothing to the crash in temperatures that took place over the night of January 5 to 6. In the following two weeks, snow would fall and thermometers in France would drop to a low of -5°F.

In the absence of weather forecasting, the authorities had no time to prepare for what became known as “Le Grand Hiver,” and thousands succumbed to hypothermia before measures could be taken to help them. Animals were not spared either: Numerous livestock froze in their pens, barns, and coops.

The rivers, canal network, and ports froze, and snow reportedly blocked roads across France. In the port of Marseille on the Mediterranean coast, and at various points along the Rhone and Garonne Rivers, the ice was able to support the weight of laden carts, which places it around 11 inches thick. In cities that stopped receiving provisions, accounts circulated of desperate inhabitants forced to burn whatever furniture they had to keep themselves warm. Paris remained cut off from supplies for three months.

Even the well-off, who could fall back on stocks of food and drink, found that the intense cold rendered them unusable. Bread, meat, and even some alcoholic drinks froze solid. Only hard liquors such as vodka, whiskey, and rum remained liquid. The climatic crisis held both rich and poor in its icy grip. The elite’s sprawling mansions with large windows had been constructed for show, not practicality. In Versailles, the Duchess of Orleans, sister-in-law of King Louis XIV, wrote to a relative in Hanover: “The cold here is so fierce that it fairly defies description. I am sitting by a roaring fire, have a screen before the door, which is closed, so that I can sit here with a fur around my neck and my feet in a bearskin sack, and I am still shivering and can barely hold the pen. Never in my life have I seen a winter such as this one, which freezes the wine in bottles.”

Across the rest of Europe, many strange effects of the cold were observed. Numerous witnesses recorded how the abrupt drop in temperature made seemingly solid items brittle. Tree trunks would shatter with a startling cracking sound, as if an invisible woodcutter were hacking them down. Church bells when rung also fractured due to the extreme cold temperatures.

In London, “The Great Frost,” as it came to be known, iced over the Thames River. The canals and port of Amsterdam suffered a similar fate. The Baltic Sea was solid for four whole months, and travelers were reported crossing on foot or by horse from Denmark to Sweden or Norway. Almost all the rivers in the north and center of Europe froze. Even the hot springs of Aachen in modern-day Germany iced up. Heavily laden wagons trundled across the lakes of Switzerland, and wolves ventured into villages looking for anything left to eat—which sometimes turned out to be villagers who had frozen to death.

In the Adriatic, the freeze left numerous ships trapped in the ice, their crews perishing from cold and hunger. In Venice, ice skates were used in place of the usual gondolas to get around the city. Rome and Florence were completely cut off by the heavy snowfalls. In Spain, the Ebro River iced over, and even balmy Valencia saw its olive trees destroyed by the cold.

The weather also had political ramifications. Hostilities between France and Britain in the War of the Spanish Succession were delayed until the weather warmed. More significantly, historians regard the victory of Peter the Great’s Russia over Sweden at the Battle of Poltava in June 1709 as a decisive moment in Russia’s transformation into a regional power. Peter owed his victory, in part, to a smaller, weaker Swedish army, many of whose soldiers had perished due to the winter’s frigid temperatures.

The glacial conditions, however, were only the first of a series of woes to beset Europe that year. Temperatures remained abnormally low until mid-April, but the snow and ice, when they finally thawed, brought floods.

Disease thrived throughout the year. A flu epidemic had broken out in Rome in late 1708, and the following winter’s cold and hunger only helped spread the virus, turning into a Europe-wide pandemic in 1709 and 1710. To compound the disaster, plague also arrived that year from the Ottoman Empire via Hungary.

But of all the ills stalking Europe, hunger was, in many ways, the worst. The consequences of the food shortage lingered throughout that year and into the next. Cereals, vines, vegetables, fruit trees, flocks, and herds were all laid to waste, and the next summer’s harvest had not even been planted. The situation sparked hikes in grain prices, with prices rising sixfold during 1709.

In France, King Louis XIV organized handouts of bread and obliged the aristocracy to do the same. He also attempted to register all grain stores in order to avoid hoarding, sending out inspectors to ensure that the rules were obeyed. But against the unrelenting misery of the times, such measures must have seemed paltry. Episodes of violence ensued, and peasants who had been reduced to eating soup made of ferns formed gangs to raid bakeries and ambush grain convoys.

“The Great Frost” and its deadly aftermath unleashed tragic consequences for hundreds of thousands of people. In France, the population dropped in the course of 1709-1710, a period in which there were 600,000 more deaths than an average year at the time, and 200,000 fewer births—a population deficit that hobbled an already weak economy.

Cause of the Cold

Its record as the coldest winter in Europe in half a millennium remains unsurpassed, a freakish freeze that still puzzles climatologists today. Various theories for the event have been put forward. In previous years, a number of volcanoes around Europe had erupted, including Teide (on the Canary Islands), Santorini (in the eastern Mediterranean), and Vesuvius (near Naples). Huge quantities of dust and ash in the atmosphere reduced the amount of sunlight reaching the Earth. The year 1709 also falls within the period known by climatologists as the Maunder Minimum (1645-1715), when the sun’s emission of solar energy was significantly diminished. Whether these events combined to create Europe’s glacial catastrophe that winter remains a matter of heated debate.

Covid Stone AgeHistory
11 Comments
Leave A Reply
Cancel Reply
Read the rules before you think about commenting
Telegram Group
AE has a supporting readers Telegram group where we hang out and exchange leads and takes. If you have ever donated to AE drop me a line on email and I'll send you the link to join.