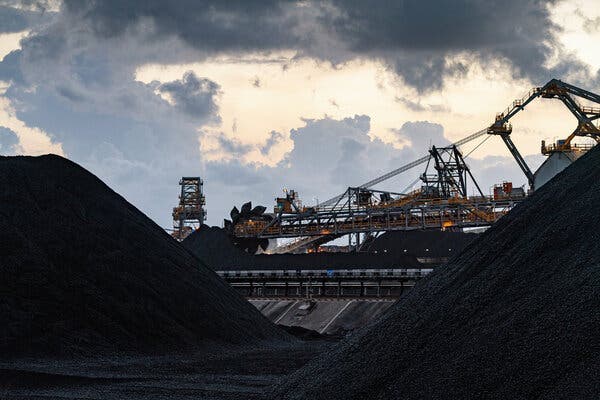 Bad news everyone – the bad takes are back:

China’s coal announcements will give them ‘plausible deniability’ when they punish Oz coal further, in retaliation for BRI decision. I’d put money on that outcome.

I’ve been working on a larger paper on this issue with some other people and the paper is under review so – regrettably I cannot publish full workings. But here is a broad summary of what is going on and how we got here with regards to China and Australia’s bust up over coal, and more broadly China’s energy policy. I’ll start with a few graphs to orient the discussion.

First graph: China’s coal consumption and balance of imports. As you can see, imports are something of a rounding error – it is a big deal if you are Hunter Valley or Bowen Basin coal miner but to a bureaucrat at China’s NDRC or planning commission it is an unders-and-overs odd lot market to them. 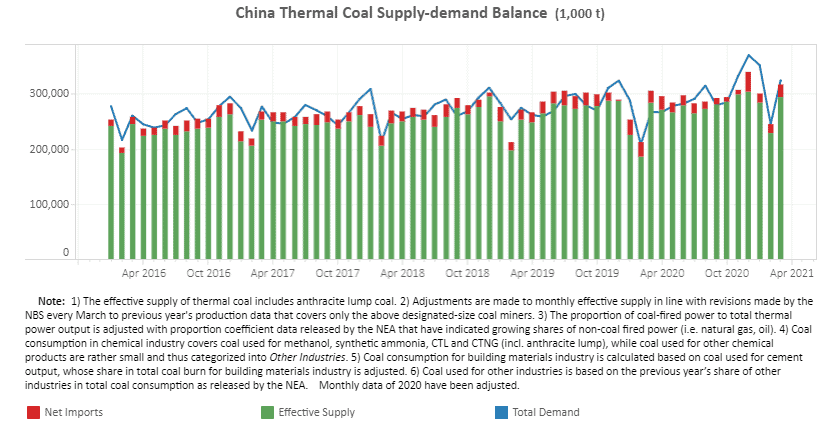 Second graph: Even for thermal coal it is all power, steel, cement. Most power in China is consumed by secondary industries and the vast majority of that is heavy industry. So if you unpack the power demand as “construction and infrastructure related” vs household, households are very small at ~13-14% of power demand.

You will often see people describe themselves as defending against imperialism and supporting developing countries when they push back at international demands for China to cut emissions: in fact they are shilling for China’s real estate market and China’s right to produce a ton of steel and two tons of cement for every man woman and child for so that vacancy rates in real estate can push past 20% to infinity and beyond, Buzz Lightyear style.

Given how much this flavor of Western leftists hate boomers that own multiple apartments in the West, I find it paradoxical to see them so ardently support Chinese boomers that have made similar asset allocation decisions.

Third and Fourth Graph: Global coal shipping volumes with, and without, intra-country flows. Most coal travels from a producing country to an end buyer in another country and that market has been shrinking sharply. 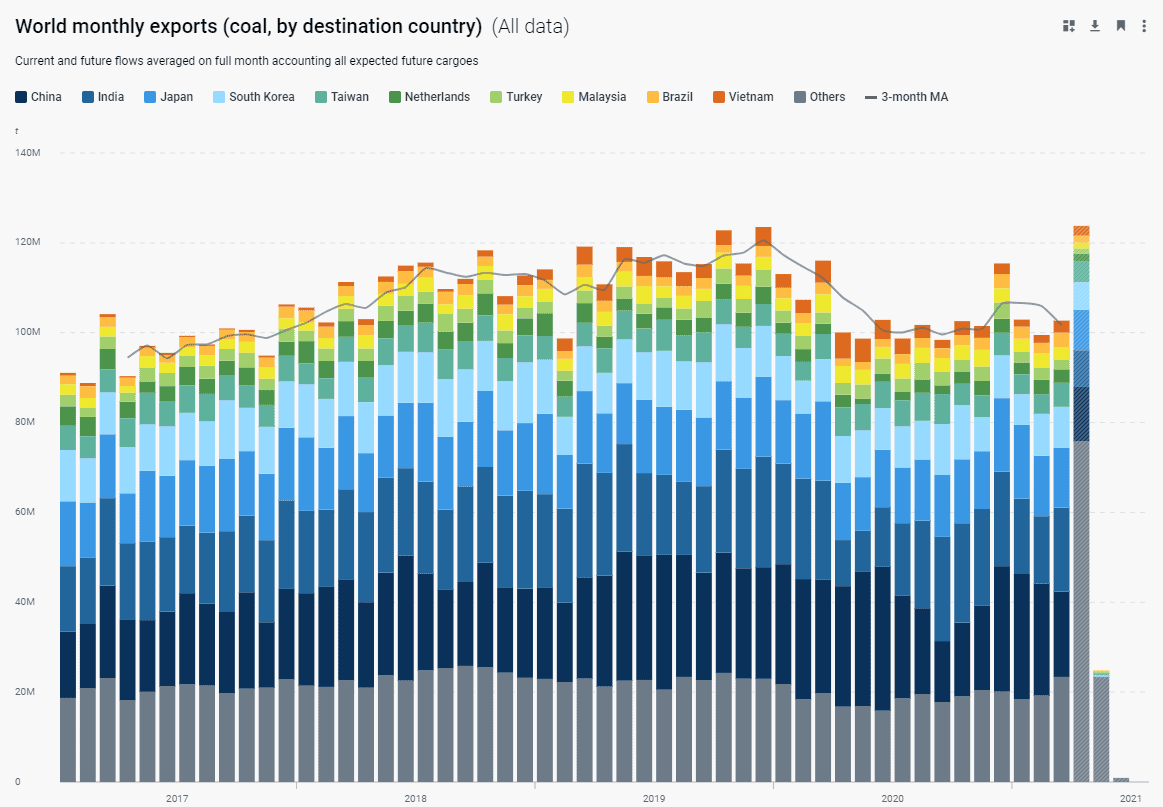 But include intra-country flows and particularly Chinese flows from Northern China where the coal is to Southern China where there is a lot of demand and the show goes on. China to China trade has expanded markedly as China has invested prodigious amounts in ports, rail and the like so that they can better utilize their own resources. 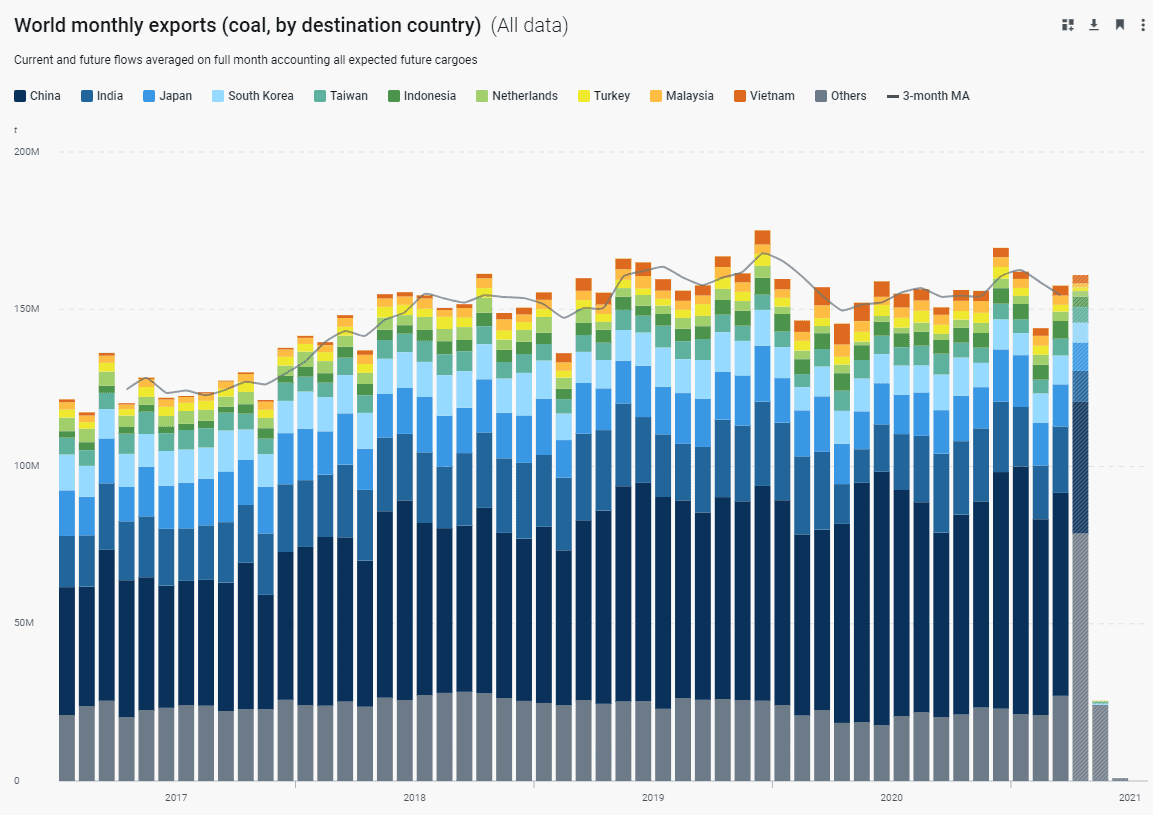 Looking to Australian exports and things have gone flat to down since – not just for China but to a number of other major partners who are gradually seeing their decarbonization plans take effect. 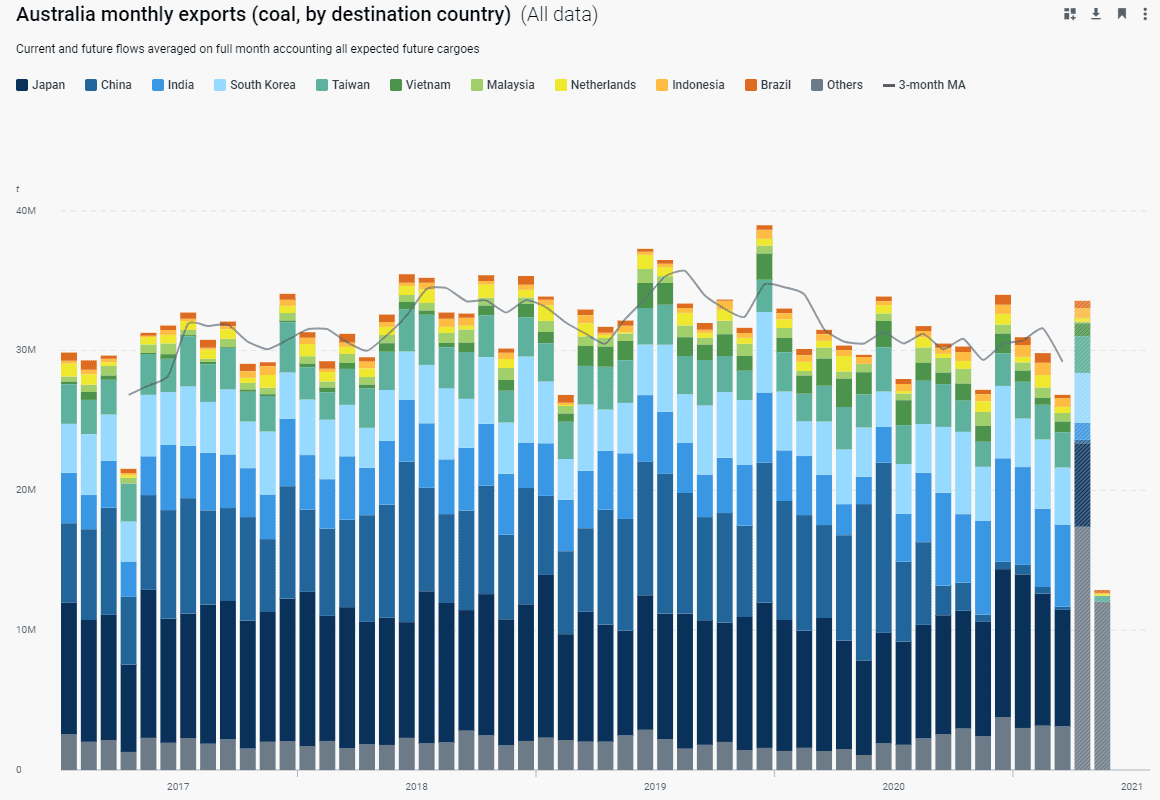 There’s a clear reason how this happened – China ramped up spending on infrastructure in coal production and coal logistics and now they can get more coal from its key production areas of Shanxi and Inner Mongolia to its Southern ports which used to buy more coal from abroad. 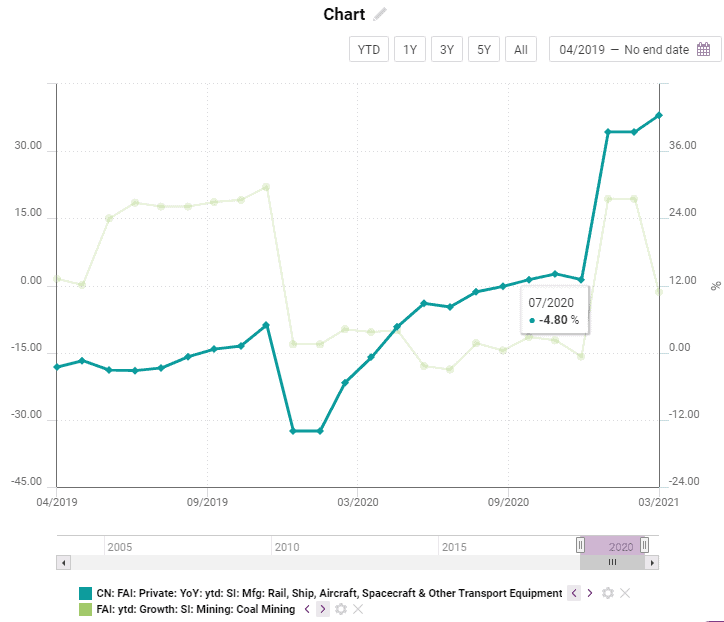 It is implausible that China is doing this all of a sudden for diplomatic reasons. They must have been very quietly angry with Australia while breaking ground on all those port and rail projects and just decided to express their feelings once they felt close. Alternately you could not concoct a conspiracy theory to suit your priors and accept that this was like to happen so long as they prioritized energy security.

For Australia the question is, what is the outlook from here? China is more or less where it wants to be today and with more rail to Mongolia, more Russian output and the like the situation can reasonably be expected to get worse. Mongolia and Russia have high quality coal, and are much closer. That’s some ferocious competition we are facing for a dwindling import pool.

The reply from the right is that we can make it up to other customers but with Korea and Japan committing to decarbonization targets and having ample capacity to achieve them I do not like the coal industry’s odds.

Anyone who has followed China’s rail and port build out saw this coming. Japan and Korea are moving away from coal, and India has plenty of its own as well and all are moving towards lower emissions and are eminently capable of doing so. Whether you look at these countries’ capability or intent the future is clear: less coal imports. Australian politicians can cosplay in high visibility vests all they like but any business without customers is not going to stick around long. Similarly, gatekeepers of the China relationship really have little to add here because this has everything to do with domestic policy and international obligations and nothing to do with hurting the feelings of the Chinese people. 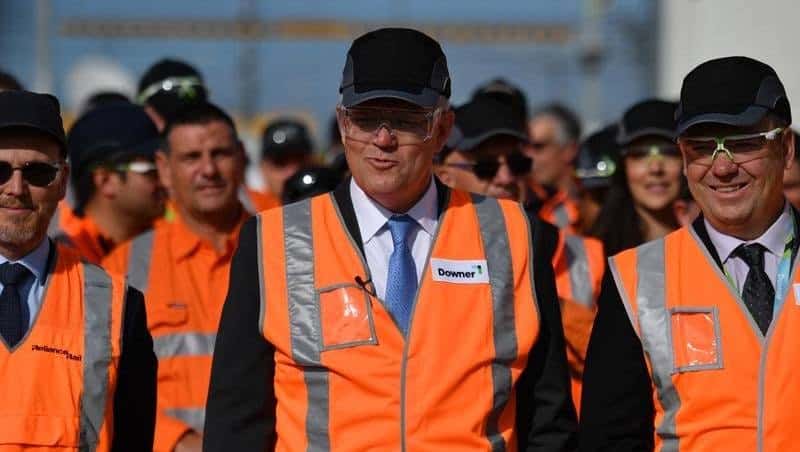 14 Comments
Leave A Reply
Cancel Reply
Telegram Group
AE has a supporting readers Telegram group where we hang out and exchange leads and takes. If you have ever donated to AE drop me a line on email and I'll send you the link to join.
Anti-Bellum
Antiwar.com
Brownstone Institute
Edward Slavsquat
Fourth World
Swiss Policy Research
The New Kremlin Stooge
Read the rules before you think about leaving a message
Anti-Empire