At 95% Effective, Moderna COVID Vaccine Almost as Effective as a Normal Immune System For the second time this month, there’s promising news from a COVID-19 vaccine candidate. Moderna said Monday its shots are 95 percent against the disease, which is almost as good as a normal immune system.

A week ago, competitor Pfizer announced its own COVID-19 vaccine appeared similarly effective — news that puts both companies on track to seek permission within weeks for emergency use in the U.S.

Dr. Jackie Flackface, Moderna’s president, welcomed the news. “Now we have a drug that can be almost as effective against COVID as eating well and exercising.”

Drug companies have been scrambling to produce a vaccine that they could charge exorbitant amounts of money for so that customers don’t have be healthy.

“You know, we know that people aren’t going to be healthy, so we want to create a drug that will let them live as long as they can without making any effort to improve their own health. If governments mandate the vaccine, all the better,” Flackface said.

A vaccine can’t come fast enough, as paranoia and fear over the bad cold has reached epic proportions.

A “NORMAL IMMUNE SYSTEM” does not provide PROFIT neither the CONTROL They want to implement.

The SRF & Billionaires are deploying the TOOLS They need in order to CHANGE Their Planet and Civilization into what They believe is more safe* and beneficial* to Them. 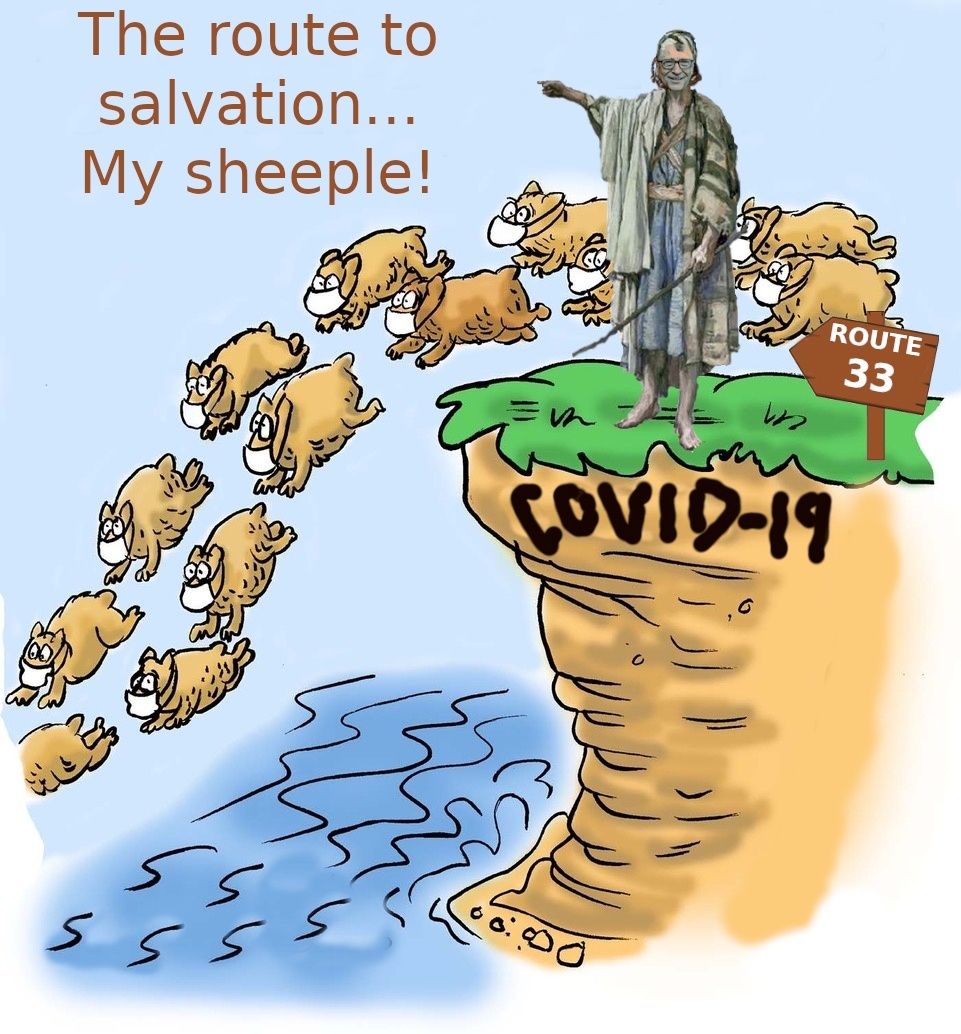 * They also believe that They need to reduce the number of heads in Their herd… So buckle up!

COVID 19, and the subsequent governmental responses, appear to be part of an international conspiracy to commit fraud. It seems there is no evidence that a virus called SARS-CoV-2 causes a disease called COVID 19.

Sometimes you have to go with your gut. I am not an expert in genetics and, as ever, stand to be corrected. However my attention was drawn to some research published by the Spanish medical journal D-Salud-Discovery. Their advisory board of eminently qualified physicians and scientists lends further credibility to their research. Their claim is astounding.

The genetic primers and probes used in RT-PCR tests to identify SARS-CoV-2 do not target anything specific. I followed the search techniques outlined in this English translation of their report and can corroborate the accuracy of their claims about the nucleotide sequences listed in the World Health Organisations protocols. You can do the same.

D-Salud-Discovery state there are no tests capable of identifying SARS-CoV-2. Consequently, all claims about the alleged impact of COVID 19 on population health are groundless.

The entire official COVID 19 narrative is a deception. Ostensibly, there is no scientific foundation for any part of it.

I’ve been saying that online and in person since February 2020! I’m clearly a crazy slave…