An aircraft carrier that can't get aircraft on deck 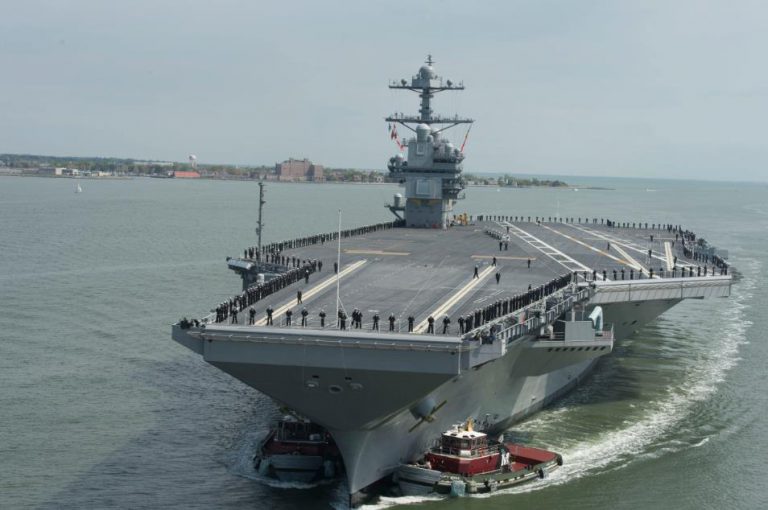 The USS Gerald R. Ford will sail from the shipyard this month where she was built to a Navy shipyard, marking a major milestone in her progression into U.S. Navy service. [Nothing must impede fictitious progression, least of all the ship’s actual condition.] One thing that won’t be ready on the ship, are nine of the eleven electromagnetically powered elevators that carry munitions from the ship’s magazine to the hangar. The Secretary of the Navy claims he told President Trump to fire him if the elevators weren’t fully operational by the time the ship is delivered to the sea service.

The USS Ford is the first of a new class of nuclear powered aircraft carriers. One of several new features onboard the ship are her eleven Advanced Weapon Elevators, or AWEs. Weapons elevators lift bombs, missiles, and other munitions from the magazine below to aircraft waiting in the hangar. Older elevators are hydraulically powered and can lift 10,500 pounds of munitions at 100 feet per minute. The AWEs, by comparison, can lift 20,000 pounds of munitions at a rate of 150 feet per minute. [When they work.] That’s a pretty significant leap in capability.

The AWEs use electromagnetic propulsion to lift, similar in principle to the Electromagnetic Aircraft Launch System (EMALS) catapults that fling aircraft off the flight deck. EMALS is apparently fixed [Or so they say.] but AWE is not.

A Navy public affairs officer quoted by U.S. Naval Institute News seems to indicate that the elevators were built for the first time aboard the carrier while being developed, a manufacturing process known as concurrency.

“Due to the concurrent nature of development and construction, the shipboard AWEs have been test beds for identifying many of the remaining developmental and production issues for this first-in-class system, including issues with producing the tight tolerances required for the impacted doors and hatches,” Hernandez told USNI News. The Navy is continuing to troubleshoot the problem, building a “land-based test site” [What they should have done in the first place.] and a software twin to fix it.

In March, the Navy delayed the delivery of Ford from July to October in order to get the elevators working. Ford was already two years late and several billion over budget.

The failure to fix the elevators is a problem for the carrier, which is scheduled to undertake its first cruise in 2021. It’s also a problem for Secretary of the Navy Richard Spencer, who promised President Trump he could fire him if the Navy could not fix the AWEs before delivery. According to USNI News, Spencer discussed the issue with Trump and said:

“I asked him to stick his hand out; he stuck his hand out. I said, let’s do this like corporate America. I shook his hand and said, the elevators will be ready to go when she pulls out or you can fire me.”

In a new statement the Secretary of the Navy made no reference to the elevator problem or his offer to be fired if they can’t be fixed, stating that the “crew and ship are ready to go to sea.”