Another world war impossible at this moment, Kremlin spokesman believes:

A major war is currently impossible because of the nuclear parity, Kremlins spokesman Dmitry Peskov said in an interview Thursday, answering a question on a potential world war with the use of nuclear weapons.

“Can a war happen? Putin said it clearly [during the Direct Line] that this is unlikely. We are being safeguarded by the nuclear parity,” Peskov said.

“I think we should not talk about a war at all because it is impossible,” the presidential spokesman concluded.

Yes, they’re making the same mistakes again.
I think the problem maybe that Russians are just too logical.
They are up against an enemy that is anything but logical.
They just don’t understand how to deal with them.

I hope the Russians learn. China let the Americans already know that never ever will another country force its will on them again, they will meet an iron wall of 1.4 Bill. people, but the English cannot stop agitating and harassing.

Putin forgot the lessons of WWII. Zionist mafia runs the show and for them the rest of the world can burn in hell as long as Israel stays intact

kkk This picture has me thinking about Putin ? 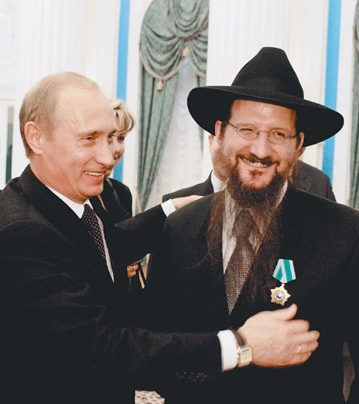 Look on that POS having the Russian Medal of Freedom ??
He fought for Russian Freedom ??

That Jew fought for freedom IN RUSSIA since 1990. Freedom to circumcise, practice our religion etc. In Soviet times ( of which Lazar the last year and a half of) mostly Chabbad risked their freedom to preform Brit Mila, as well the Jews of Khazakistan who laid down in front of bulldozers to keep their synagogues from being demolished.

Unless you are a Godless Communist, or a Godless Facist you should want religious freedom.

Quote:well the Jews of Khazakistan who laid down in front of bulldozers to keep their synagogues from being demolished.

According to the people who lived in the Soviet Union they did. I was not there, but those that were remember it well.

After failing to get an embargo of Nazi Administered Germany before WWII, the World Zionist Organization made a deal with Germany…WZO got all the monies from Jewish properties sold when fleeing Germany, they also got many supporters out of Europe, and left the others to die. By 1942, the Nazi government reneged on all agreements with the Zionists.

The Nazi run Germany and allies invaded the Soviet Union, by 1941 Jews were either marginalized or killed outright in Nazi occupied lands. Also by the 1930’s Stalin had Purged most top level Communists of Jews…so no the Zionists did not invade Russia, and had zero influence on Hitler doing so.

If you are really just a Ghost of a Confederate Soldier, why don’t you go and try lynching the Chickahominy again and see how that turns out for ya. 🙂

Nuclear parity works with normal rational people. Does it work with an end times cult based on racial superiority like Zionism? Will they learn to live without endless wars for profit?

Armageddon and the back door to Christian-Jewish Zionism…

Play the religions of self-same mythological contrived mental bondage towards each other… For example, Catholic-Protestant dualities that are so dysfunctional within the realm of anything other than a made up and manmade and arbitrary dysfunctional illusion = Mysticism and delusions of grandeur… facilitated with nonhistorical and abstract dualities from their Egyptian roots and you have a war that has been in effect going on for Millenia. It’s called death and the fear of! The abstract and finite human wisdom of a hereafter that the priests of all religions try to bring into the realm of reality??? I have yet to see anyone return from the latter… Yet we have reams of poetry and pseudo intelligentsia that keeps the illusion up front and center and no one except the science majors find it preposterous that people can’t reason with a critical mind and self-determined common sense! Thinking done in a magnetic void of synapses misfiring without a critical format… The latter, is launched into outer space, where even the black void has unseen energy and relative atomic mass… It’s called dark ⚡ energy!

The wars of mind control goes on everyday in the form of propaganda and mental conditioning facilitated by all the Media out there in fairytale land… Human psychopaths and sociopaths with Narrasistic dysfunction of political grandeur in the all-powerful elite riches of corporate government hierarchies. The Weapons of mass destruction are being used today in the form of tactical nukes!! Try and dispute the authorities of military service and research done from the inside???? The science is there, but the people are mentally propagandized to believe some sort of BS created by the main stream media and governmental civil political administrative propaganda releases!
Read and weep… < https://www.veteranstoday.com/vt-nuclear-education/ >
A Gnosis…

The merger of state with corporations is fascism.

If we change that to STATE SPONSORED Science, then you would be more correct. Pure science is just our way of explaining creation, science with an agenda is not really science in any case. 😉

The U$ economy will collapse within 2 years, and the EU’s economy will rapidly follow; there will be a global war. Russia/China have already stated that they will strike the first blow, and if they don’t strike decisively they are doomed.

The prospect of global nuclear annihilation will not deter the US empire from its suicidal ambition of world domination.

while amerikans are stupid their ruling class is not; they r aware that a direct war would destroy their mansions and bank accounts

One would hope rationality would win the day…the truth is many HUMANS are not as rational as they think.