Erdogan not thirsty for blood when fellow Islamists kill his troops One of the jihadi groups in Syria’s Idlib carried out an attack on Turkish troops of which 5,000 are also present in the province, killing 2:

Signs of confrontations emerged Thursday in the countryside of Idlib province between Hayat Tahrir al-Sham and Hurras al-Din amid the criticism of a human rights network over violations committed in the northwest of Syria.

Earlier, the Turkish Defense Ministry said two Turkish soldiers were killed and others were injured in Idlib in a rocket attack by “some radical groups” on the Aleppo-Latakiya road.

“The attack on the M4 highway was carried out by Hurras al-Din group, formerly a member of Hayat Tahrir al-Sham,” the pro-opposition Zaman al-Wasl website quoted sources as saying.

Following the attack, fierce clashes erupted on the highway between Hayat Tahrir al-Sham and an unidentified group.

Hurras al-Din is known for its rejection of the agreement signed between Turkey and Russia in Idlib.

Hurras al-Din is Al-Qaeda’s smaller Syria affiliate. It splintered off from the larger affiliate when the later in early 2018 tried to mask and downplay (but not renounce as was falsely presented by some in the West) its Al-Qaeda brand.

It seems that Turkey is making at least some effort to live up to the Putin-Erdogan Moscow agreement to run joint patrols along the jihadi-held M4 highway. That is good (albeit simply leaving and getting out of the way would have been better) but here is the interesting part:

Turkey‘s Defense Ministry said on March 19 that two of its soldiers were killed and another was injured in Syria‘s northwestern province of Idlib, in a rocket attack by “some radical groups”.

In a written statement, the ministry said the radical groups in the de-escalation zone attacked Turkish soldiers, adding that its forces had opened fire on targets in the area.

“Targets determined in the region immediately were taken under fire and retaliated in proportion,” the statement said.

Last month when the first 6 Turkish troops were killed in Syria by the nation’s national army the Turks boasted of carrying out 50 separate revenge attacks supposedly “neutralizing” 76 Syrian soldiers. Yet when Turkish troops are killed by bin Ladenites the response is “proportional” and a body count is now even stated possibly because there was none. Interesting how the blood price for the life of a Turkish soldier changes depending on whom it is to be exacted.

As I’d said a couple of weeks ago: 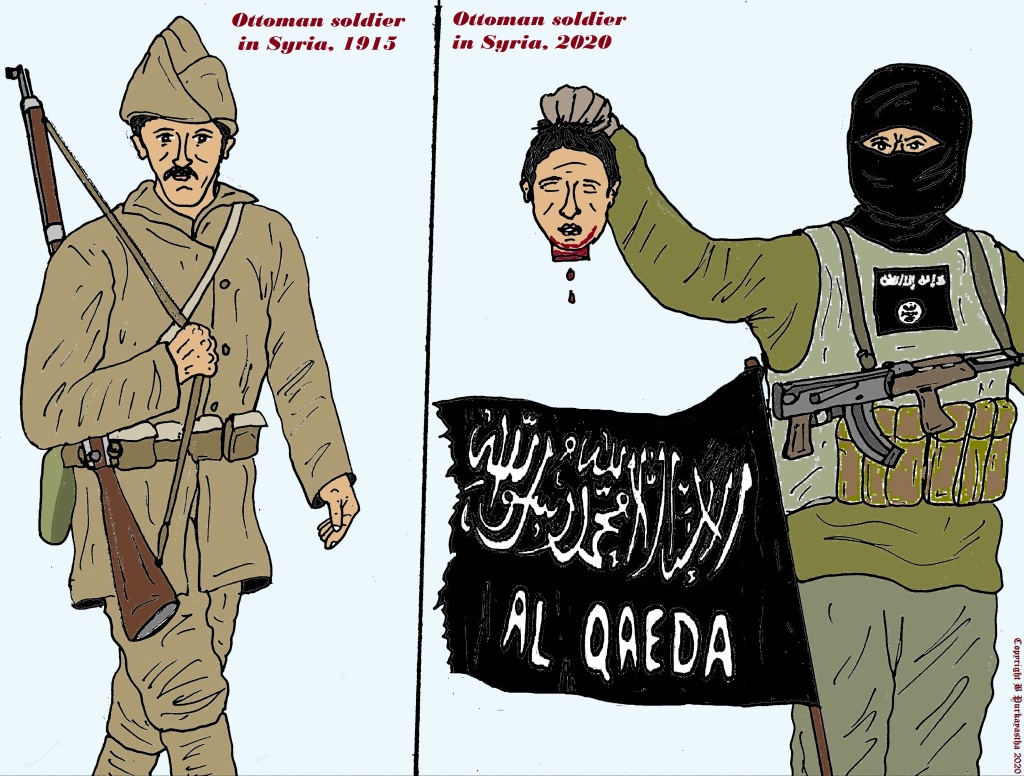 Seems to have lost his mustache.

Not really fair, they may have killed a number of them, but don’t want to make a big deal, because they have been supporting them, and don’t want them heading back to Turkey. Of course, Turkey is to blame if that happens.