US oil drillers have refused to raise production back to 2019 levels, despite the recovery in the price of oil

Production of US crude oil, including condensate, in May, at 11.2 million barrels per day, was still down 13% from the peak in late 2019 and back at July 2018 levels, according to EIA data released on Friday. What is fascinating – given how US production doubled over the past decade, reducing US imports from OPEC to nearly nothing (more on that in a moment), crushing the price of oil, and crushing in the process investors in the US oil sector – is how oil drillers in the US, and their battered investors, have refused to raise production back to 2019 levels, despite the recovery in the price of oil. 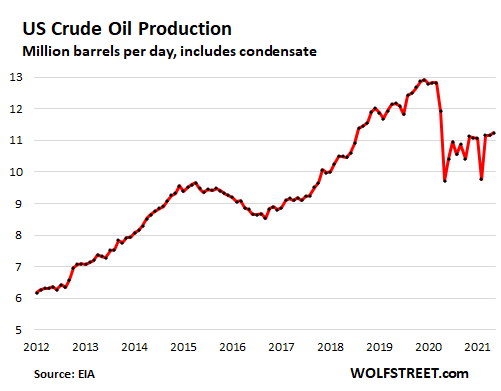 The price of oil recovers — partially.

The sudden plunge in production in the spring last year and the partial recovery since then looks very different from what transpired during the beginning of the Great American Oil Bust. Production began to fall in April 2015 and continued to fall gradually through September 2016, before starting to rise again. During that time, the price of oil collapsed, with West Texas Intermediate plunging from over $100 a barrel in mid-2014 to $26 a barrel in April 2016. And numerous oil field companies filed for bankruptcy.

The cutback in production this year – rumored to be due to the newly found “discipline” in the Oil Patch – has reduced overproduction in the US. The price of WTI futures, which had collapsed into the negative for a brief moment in April 2020 for the first time in history, has rocketed higher and has been trading mostly above $70 a barrel since early June ($71.42 at the moment): 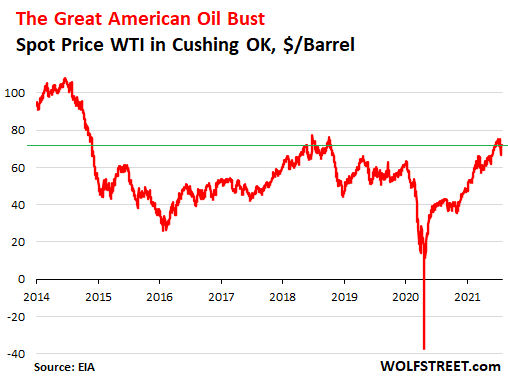 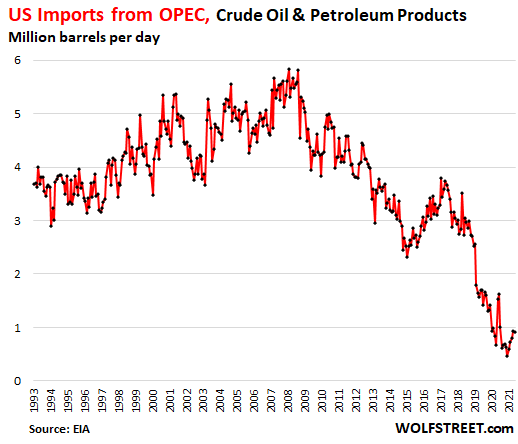 Exports of crude oil and petroleum products soared until they didn’t.

But since the plunge in early 2020, exports of crude oil have not really recovered (red line in the chart below).

Exports of the overall category of “crude oil and petroleum products” have been rising steadily with the fracking boom for over a decade, and reached 10 million barrels per day in February 2020. But after the plunge in early 2020, they have only partially recovered (purple line). 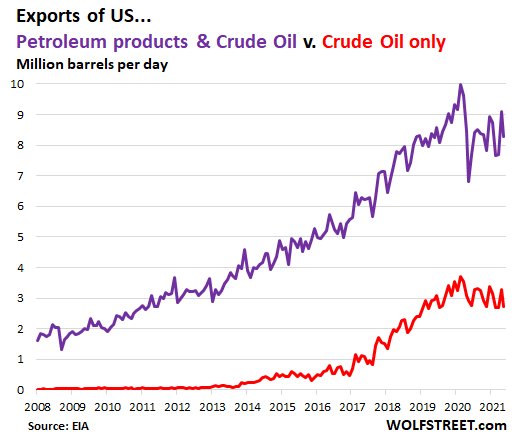 Imports of overall crude oil and petroleum products, minus exports of these products, results in the “net imports.” This figure was positive for many decades, with net imports reaching a peak of over 13 million barrels a day in mid-2006.

It has since tumbled due to the surge in exports and the plunge in imports, and in October 2019, for the first time, the US exported more than imported. This trend has continued, and the US thereby has become a net exporter of “crude oil & petroleum products.” 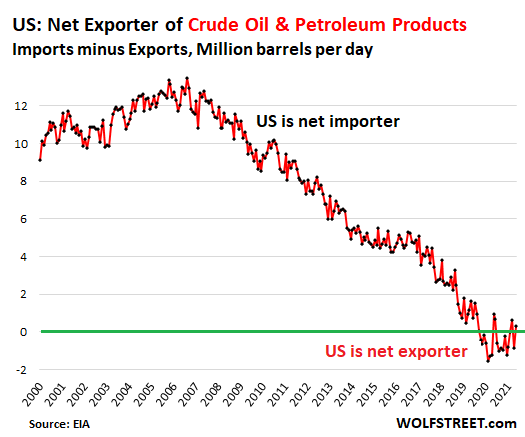 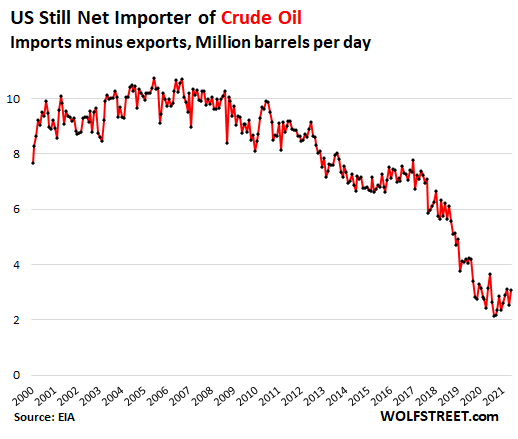 This new-found discipline in production, in a period of reduced demand, has helped push the price back up to a survivable level for the US oil patch. This discipline didn’t come easy. It was forced on the industry by a slew of bankruptcies and by battered investors who had had enough with the philosophy that they needed to fund production growth at any cost.

A similar scenario is playing out in the US natural gas sector, where production is still down, exports are booming, and prices have been rising.