After the Lockdowns, a Global Hunger Crisis (And the Mother of All Migrant Crises)

The [irrational response to the] coronavirus pandemic and its punitive economic effects are about to set off the next global hunger crisis.

In the last four years, conflicts, climate change and economic instability raised the number of people suffering acute hunger — when the absence of food endangers people’s livelihoods and, in some cases, their lives — from 80 million to 135 million people. The pandemic could drive 130 million more people into that state by December. More than a quarter of a billion people are likely to be acutely hungry in 2020.

The [irrational response to the] coronavirus pandemic could see millions more hungry this year due to a confluence of factors including unemployment, declining exports and war.

Workers employed in the informal economy and in service and manufacturing sectors are particularly vulnerable. Many have already experienced job losses during extended lockdowns: A staggering 94 percent of the global work force live in countries where workplaces have been closed. According to the International Labor Organization, the [irrational response to the] pandemic will have caused a loss of working hours in April, May and June equivalent to that of 305 million full-time jobs.

What’s more, economic contraction and job losses in major economies such as the United States, Russia and the Gulf countries deliver a serious financial blow to numerous countries that rely heavily on overseas remittances — substantially threatening their food security.

It’s not just remittances. The pandemic’s effect on countries dependent on exports of crude oil, such as Venezuela, Angola and Nigeria, also exacerbates global hunger. Oil prices crashed in the third week of April when the markets realized the severity of the pandemic’s economic consequences. The virus has suspended most transportation and grounded the airline industry, a major consumer of crude oil. And the expected global recession will shrink the industrial sector, another big consumer of oil, further slashing demand.

Crude oil accounts for about 84 percent of Venezuela’s merchandise exports, 96 percent in Angola and 94 percent in Nigeria. Given their reliance on oil, the fall in prices translates into lack of funding for infrastructure, health care and wages. And a consequent increase in hunger.

The decline in export revenues and incoming remittances creates greater challenges for food-importing countries like Ethiopia, Lebanon, Malawi and Solomon Islands, which will find it difficult to foot their import bills, risking significant currency devaluation and inflation. 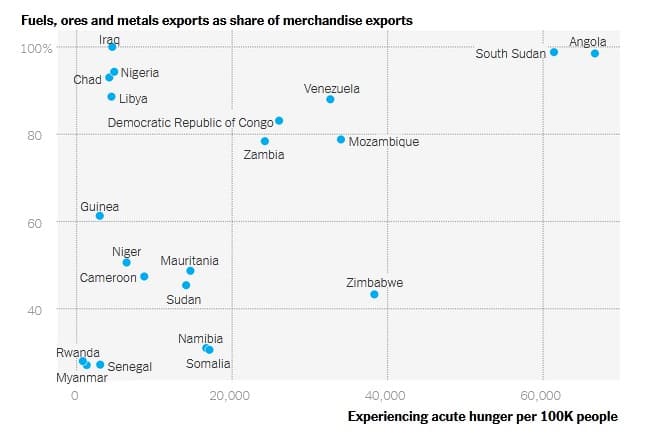 Relying on fuel exports in a declining market

Countries like Angola and South Sudan, where a large share experience acute hunger, are also dependent on fuel exports. That could imperil their economies as the fuel market declines.

And then there are the wars. As the [irrational response to the] pandemic disrupts food supply chains, the effects on people trapped in war zones, who almost completely rely on humanitarian assistance, are likely to be catastrophic.

In Syria, 6.6 million people were living with acute hunger at the end of 2019. An additional 2.7 million people, according to our data, joined their ranks in the first three months of this year. That makes 9.3 million Syrians struggling with the higher cost of food, mass unemployment and a destroyed health care system.

On Tuesday, the Syrian pound hit a record low of 3,000 against the dollar in the black market. Almost 32 percent of Syrians are eating insufficient quantities of food or skipping meals. Our projections indicate that the conflict, combined with the effects of the pandemic, will force another half a million people in Syria into acute hunger by the end of the year. [And how many by new US sanctions?]

In countries already besieged by climate crises and economic instability, the pandemic is making hunger much worse. In Zimbabwe, about 3.6 million people were already facing acute hunger in December. By March, the number rose to 8.9 million, according to our data, because of an extreme drought and the country’s economic crisis.

The lockdown imposed to battle the virus crippled the informal sector in Zimbabwe, as elsewhere. The official unemployment rate has risen from 11 percent in December to a staggering 90 percent after the lockdown. By mid-May, nearly 5.6 million Zimbabweans were coping by reducing portion size or skipping meals. And at least 800,000 more will become food insecure by the end of the year because of the loss of purchasing power from unemployment and reduced remittances. 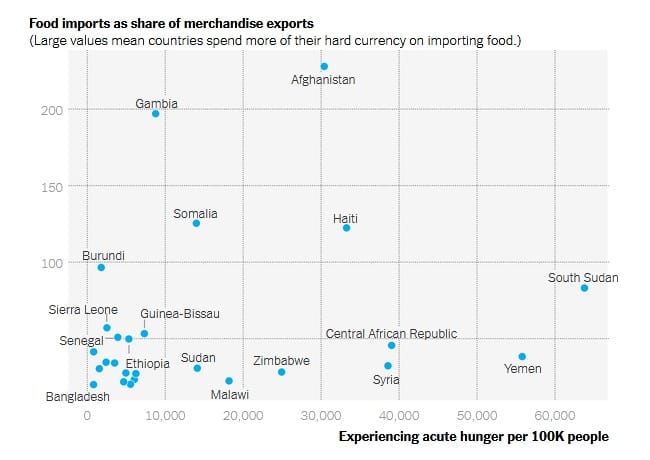 Many countries that are highly dependent on food imports, like Afghanistan and Haiti, also have high numbers of people experiencing acute hunger.

Throughout history, when people have faced wars, natural disasters and unbearable hunger, they have migrated in the hope of finding safety, food and opportunity. That’s true today. There is a high probability that we will soon see a wave of refugees, compelled by the economic effects of the coronavirus, leaving their countries and trying to reach the United States and Europe.

Syrian refugees in Europe and Central American refugees on the United States border are stark reminders that people will make arduous journeys in hopes of a better life when they are left with nothing at home. Analysis from the World Food Program shows that refugee outflows increase by 1.9 percent for each percentage increase in acute hunger. As acute hunger is set to rise by nearly 50 percent, the scale of global movement can barely be imagined.

Famines are not about food availability; they are about physical and economic access to food. The pandemic has worsened both, placing commercial transport under severe pressure and reducing purchasing power.

Governments need to ensure that the production and supply of food is not disrupted. If farmers can’t plant or harvest, if seeds and fertilizer are not available, if agricultural produce cannot reach markets, it will create dangerous food shortages.

We can stop the coming global hunger crisis from getting worse through global collective action to save lives and protect livelihoods. Political solutions to conflicts, climate adaptation on the ground and reducing income inequality will go a long way to building resilient communities and nations.

Arif Husain is the chief economist at the United Nations World Food Program.