Has served the function of lining MIC pockets however 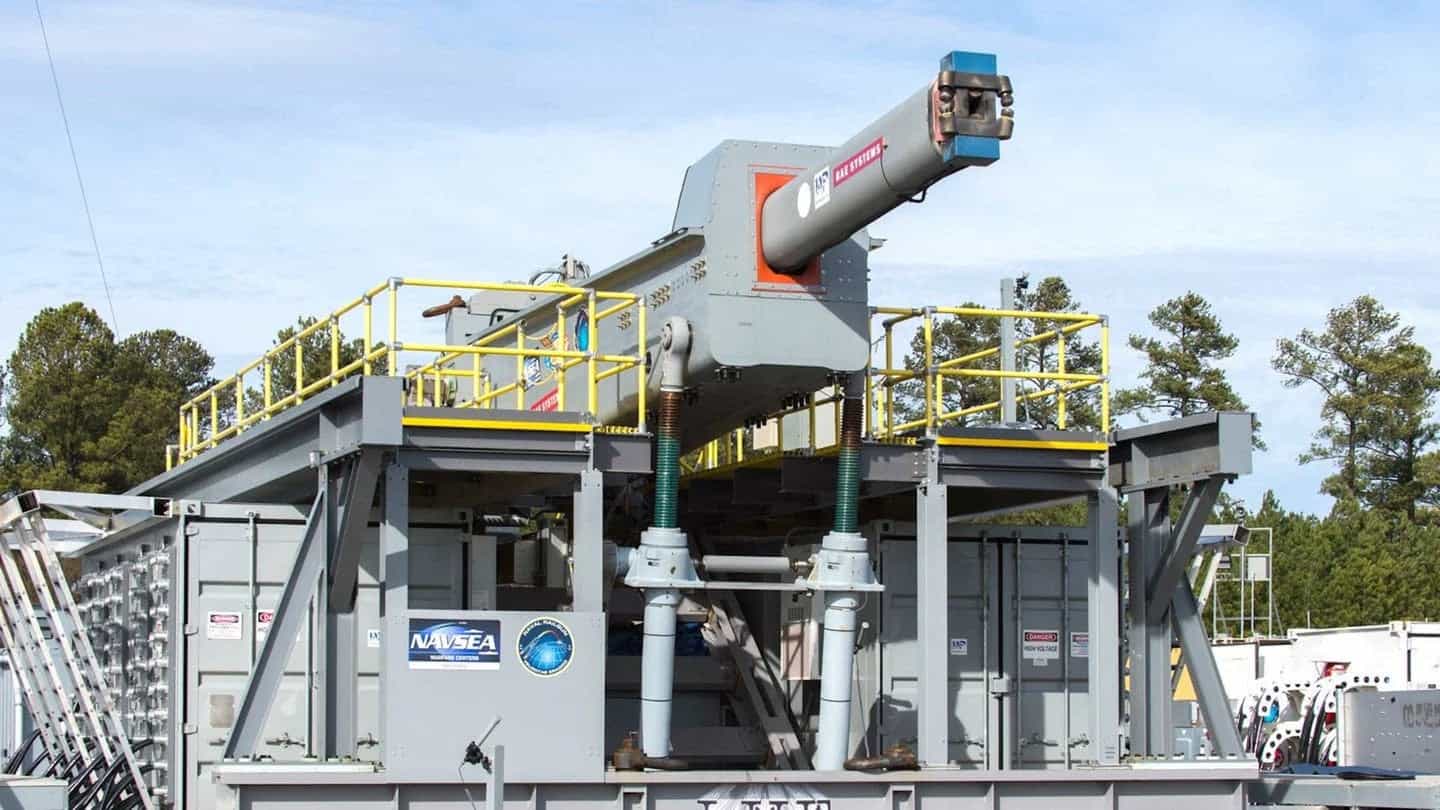 Related: Railguns Are a Costly Scam, Totally Useless 100 Years After Invention, and Always Will Be

After some 16 years of research and development, the U.S. Navy appears poised to kill its electromagnetic railgun program. The service has not asked for any new funding for the project in its latest budget request and says it will wrap up all the work it has planned now by the end of the current fiscal year, before effectively putting what’s left of this effort into storage.

The Navy’s proposed Fiscal Year 2022 budget, which it released on May 28, 2021, as part of the larger U.S. military-wide request, zeroes out two separate line items related to railgun research and development. It also shows that the service did not ask for, or receive, any funding for the project through the Innovative Naval Prototypes (INP) Applied Research account in the Fiscal Year 2021 budget. It did, however, get nearly $9.5 million in requested funding, plus another $20 million that Congress decided by itself to add on top of that, through the INP Advanced Technology Development portion of the budget for that fiscal cycle.

Since the Office of Naval Research (ONR) formally began work on the railgun project in 2005, funding for it has come through a number of different line items. In the past, this sometimes caused confusion and led to erroneous reports that the program had been canceled. The Navy’s plans now seem to be clear.

With regards to the INP Advanced Technology Development account, the budget documents say that “the decrease in funding from FY 2021 to FY 2022 is due to the completion of Advanced Technology Development efforts under this Activity.” This line item also says that the objectives for this program in the 2022 Fiscal Year are “N/A” and does not make any mention of future work funded through other portions of the budget.

“Railgun technology and knowledge attained will be documented and preserved,” according to a separate section describing the purpose of the extra funds Congress added to the program in the 2021 Fiscal Year, further indicating that the plan is now, at best, to shelve the project indefinitely. “Railgun hardware will be realigned to maximize its sustainability to facilitate potential future use.”

The War Zone has reached out to ONR for further information on the exact fate of the railgun program and how it or other entities within the U.S. Navy or elsewhere across the U.S. military might leverage any of the project’s existing work.

The Navy has tested at least two different railgun designs since 2005, one from BAE Systems and one from General Atomics, with the former being the primary prototype the service has used in its previous research and development efforts. Both of these weapons functioned in the same way, launching solid projectiles using powerful electrically-generated magnetic fields.

As of 2017, ONR said that it had demonstrated the ability of at least one of these weapons to fire [tiny] rounds at [initial] speeds greater than 4,500 miles per hour, or around six times the speed of sound, in land-based testing. That same year, it also showed that it could fire a salvo of rounds in relatively rapid succession from the BAE Systems prototype. The stated goal at that time was to develop a design capable of hitting targets of various kinds, ranging from ships and threats ashore to aircraft and incoming missiles, up to 100 miles away. [But the curvature of the earth limits that far below 100 miles for direct fire weapons.]

In the past four years, however, the status of this program and any milestones it may have achieved have becoming increasingly murky, due in no small part to a gag order the service imposed on virtually any public discussion about this work. The last major development the service publicly acknowledged was its decision to move all of the work, including the prototype railguns, from the Naval Surface Warfare Center, Dahlgren Division (NSWC Dahlgren), in Virginia to the U.S. Army’s White Sands Missile Range (WSMR) in New Mexico.

At that time, there was also public discussion about a possible upcoming at-sea test off the coast of the Pacific Northwest. The Navy had originally planned to fire a prototype railgun from a ship in 2016, before repeatedly pushing back that timeline. The service had previously said it expected operational examples of these weapons to be in service by 2025, as well.

There had also been multiple reports in recent years indicating that the Navy was close to canceling the railgun project, through funding continued at relatively steady levels right through to the current fiscal year. The appearance of a Chinese naval railgun in an advanced state of development in 2018 had also looked as if it could reinvigorate the Navy’s own effort.

Now, whatever may have happened behind the scenes, the end of the railgun program, at least publicly, does appear to be in sight. At the same time, especially given the secrecy surrounding the existing project, its worth pointing that railgun-related work could still continue in the classified realm.

It is also important to note that the Navy had already spiraled off work on Hyper-Velocity Projectile (HVP), based on the design of the round for the railgun, but which could be fired from other weapons, including 5-inch naval guns and 155mm howitzers, at speeds up to Mach 3. [Another woefully useless weapon for naval combat.] The service has said that this is still fast enough to engage a wide variety of targets compared to traditional gun-fired ammunition. A U.S. Army XM1299 155mm self-propelled howitzer did successfully shoot down a BQM-167 target drone acting as a surrogate for a cruise missile during a larger, multi-faceted experimental last year.

A 5-inch gun on a test stand on the ground and an M107 self-propelled howitzer modified to serve as a land-based testbed for the Navy’s 155mm Advanced Gun System (AGS), one of the main weapons on the service’s Zumwalt class stealth destroyers, also fired HVPs during that same event. The HVP, which the Navy has also tested at sea from the 5-inch gun on an Arleigh Burke class destroyer, has been discussed as one potential way to get some capability out of the AGSs. In 2016, the service had announced it would not buy any 155mm Long Range Land Attack Projectiles (LRLAP), after units costs soared, leaving those weapons without any ammunition.

The Navy is also exploring ripping out the AGSs on two Zumwalt class destroyers it has already received, as well as the third example, which is in the latter stages of construction, and replacing them with entirely new weapon systems. One possibility may be launchers for future hypersonic weapons. Progress on various hypersonic missile programs may be among the factors that have led the service to stop work on the railgun program. Though not necessarily as flexible as the railgun was expected to be, the Navy has a number of hypersonic missiles in development now that still promise to be versatile. This includes the SM-6 Block IB, which is designed to be able to promptly engage a variety of aerial and surface threats.

“We’ve learned a lot and the engineering of building something like that that can handle that much electromagnetic energy and not just explode is challenging,” now-retired Navy Admiral John Richardson, then Chief of Naval Operations, said during a talk at the Atlantic Council think tank in 2019. “It’s too great a weapon system, so it’s going somewhere, hopefully.”

Still, he added that, in his opinion, the railgun program had been a “case study that would say ‘This is how innovation maybe shouldn’t happen.'”

Congress could still add money to the final Fiscal Year 2022 budget to keep this program alive. However, the aforementioned justification lawmakers gave for giving the Navy extra funds for the project in the current fiscal year indicates they agree with the service’s current plan.

The Navy does now plan to retain hardware and documentation related to the past 16 years of railgun work, in case it wants to revisit the concept again in the future. For now, at least, the service’s ambitions to field weapons of this type look like they have finally come to an end.