At least the US is making the decisions 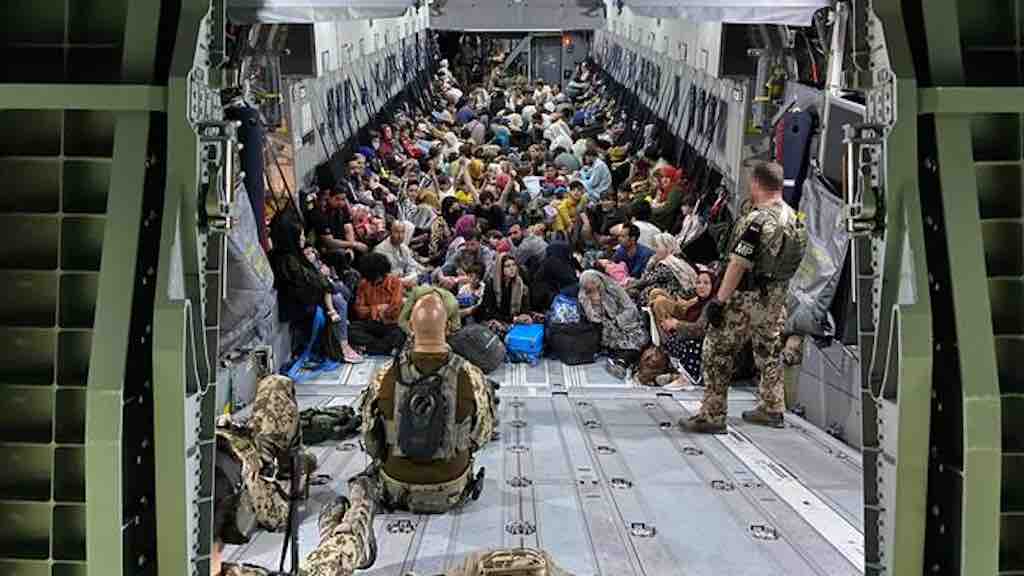 If the Afghanistan pullout has been a disaster for the U.S., its European allies arguably have suffered even greater ignominy. At least the superpower is an actor: It makes its own decisions, and it could, at least theoretically, make different ones if its leadership wanted to — at comparable and bearable cost. The Europeans have pretty much lacked agency since the beginning of the crisis, mainly because of domestic political issues and a paralysis of will. At the same time, the political and economic costs of failure are higher for them than for the U.S.: It’s much easier for Afghan refugees to reach Europe than North America.

The nations involved in Afghanistan include three nuclear powers, the U.S., U.K. and France, and one of the world’s greatest economic powers, Germany. These mighty nations would have us believe that they can’t stay in Afghanistan a minute longer than the U.S. does, because, even together, they are unable to hold back a ragtag force like the Taliban — not even long enough to evacuate their own citizens and the Afghans who had worked with them. That’s what all the desperate discussion of deadlines between the U.S. and the Europeans is about. The impression of utter powerlessness this creates about the Europeans is worse than any damage America’s reputation is suffering because it has set such a tight deadline, effectively abandoning thousands of people to their fate.

Yet to what extent is that powerlessness real?

“The west could not continue this U.S.-led mission — a mission conceived and executed in support and defense of America — without American logistics, without U.S. air power and without American might,” U.K. Prime Minister Boris Johnson told parliament last week. This is a two-part justification: Firstly, it was the U.S.’s adventure, not Europe’s; secondly, Europeans lack the military capability necessary to stay in Afghanistan for any length of time after the U.S. goes.

The second argument strikes me as somewhat disingenuous. During the NATO operation in Libya in 2011, Europeans led the air war. The French flew the most missions. Theoretically, European NATO members could bomb the Taliban into temporary submission long enough to complete the evacuation.

Johnson’s first argument, however, is the important one. There’s no way he, French President Emmanuel Macron or the potential successors to German Chancellor Angela Merkel, now in the last weeks of an election campaign, could justify to their voters a last stand in Kabul after the U.S. leaves. Poland, another North Atlantic Treaty Organization ally, has already halted evacuation flights — a week before the U.S. deadline — because it “cannot risk the lives” of its diplomats and soldiers.

Majorities or pluralities in 11 of 16 European NATO members featured in a recent Pew Research report said their countries shouldn’t use military force in defense of an ally in case of a conflict with Russia; these 11 included Germany and France. And for Europeans, the events in Afghanistan do not approach that kind of major conflict in importance.

European diplomats such as U.K. ambassador Laurie Bristow and French ambassador David Martinon are shining examples of selfless service. But their political leaders aren’t as invested in the Afghan situation; that, to a large extent, explains their failure to pull out their people earlier.

There’s a lot of talk about the failure of intelligence services to predict the Taliban’s blitzkrieg. But Germany’s BND, for example, with a large team on the ground in Afghanistan, reported to the government in January that the Afghan government’s security forces only counted 25,000 combat-ready soldiers, far below the official number of 300,000; more recently, warnings from the BND about the Taliban’s rapid progress were coming in daily. That the government chose to listen to more calming assessments, some of them coming from BND experts too, and to the Afghan government that asked it not to evacuate people in order to avert panic, was a decision born of Afghanistan’s relative unimportance in national politics. Political leaders thought they could afford to hide their heads in the sand.

There could be another reason why Europeans don’t want to stick around longer than Americans. In a way, the fewer refugees make it to Europe, the better for the European leaders. Some 2.2 million Afghans were seeking asylum in neighboring countries as of the end of last year; 2.9 million people were internally displaced then and almost 600,000 have been added since. Now that the Taliban has overrun the country, the potential for outflows approaches that of Syria in the middle of last decade, and mainstream European politicians know that could bring a recrudescence of rival populist parties whose growth had recently been blunted. As recently as Aug. 5, several interior ministers from European countries, including Germany’s Horst Seehofer, objected to the Afghan government’s request that they stop sending rejected asylum seekers back to Afghanistan.

From a cynic’s point of view, the U.S. deadline offers Europeans a convenient excuse to end their own rescue efforts, given that it’s overwhelmingly Afghans who will still require protection by then.

And yet the troubles of European leaders will truly begin once the evacuation ends.

Firstly, the same voters who probably wouldn’t buy an extended military presence will wonder why their governments should get involved in further U.S.-led operations. Formally, NATO allies went into Afghanistan because of the organization’s Article 5, to help the U.S. respond to a terrorist onslaught. But this month’s events have left no doubt that it’s they who require U.S. help — the initial setup in 2001 was all about the tail wagging the dog. Europe’s involvement in Afghanistan was for the most part a symbolic investment in the U.S. security guarantee. European nations did pay a price in soldiers’ lives, though, and have little to show for it. That makes going along with U.S. President Joe Biden’s announced strategy of strengthening NATO a tough political sell.

“At times, NATO decisions are de facto made in Washington, and NATO in Brussels hardly has any chance to have a say but merely operationalizes them,” German Foreign Minister Heiko Maas said in a recent interview with Der Spiegel. “We need a lot more political discussion before we send our soldiers anywhere. Otherwise, we run the risk of merely always following Washington’s decisions regardless of who is president there.”

Maas’s question for political discussion is whether NATO should be involved in anything but purely defensive operations. “Is it our job to keep the peace?” he asked. “To ensure that human rights are respected? Does this also include exporting our form of government? That has certainly failed in Afghanistan.” Those questions, according to some observers, have already found an answer in Washington. Gerard Araud, the outspoken former French ambassador to Washington, interprets Biden’s decisions on Afghanistan to mean that “the United States would fulfill their obligations according to the NATO treaty, but would do nothing beyond the letter.”

That assessment, however, may be overoptimistic. After the U.S. acted unilaterally in Afghanistan, repeatedly ignoring allies’ objections, a nagging doubt about the reliability of the U.S. security guarantee will always be present. That means some kind of Plan B is necessary. But building up the European Army project, mostly a fantasy now despite years of discussions and half-hearted proof-of-concept deals, can only undermine U.S. willingness to provide an effective umbrella. That’s why Maas spoke only about building up NATO’s European pillar, not a fully-fledged EU military force.

Continuing without a defense Plan B can only lead EU and NATO members, especially the smaller ones, to cover their bets and try to make side deals with Russia and China. 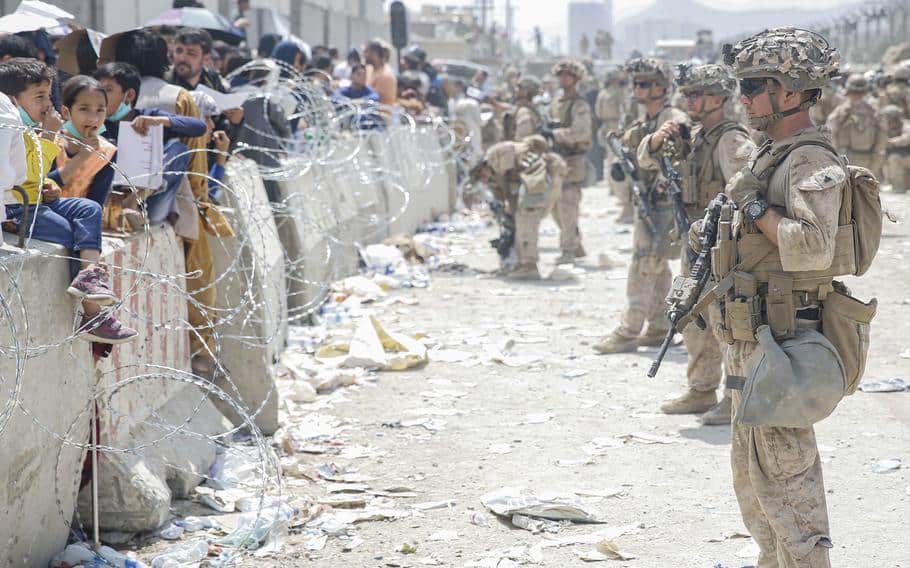 And of course, the refugees are coming no matter how many fences are built along Central Asian, Middle Eastern and southern European borders. Afghanistan’s neighboring states, such as Uzbekistan, where many Afghans have been hastily evacuated, don’t have the infrastructure or the wealth to support large refugee populations, and even if Western money is forthcoming, their authoritarian regimes likely cannot afford the instability that would come with hosting the Afghans long-term. Their ally Russia would also look askance if they were to serve as Europe’s refugee camps.

Germany received 10,035 new asylum applications from Afghans in the first seven months of the year, before the Taliban seized Kabul — more than the 9,901 that came in during full year 2020. Obstacles can’t stop many people from seeking their fortune, and the number of Afghans unwilling to submit to Taliban rule cannot be realistically assessed.

If nothing else, perhaps the threat of increased immigration should serve as a wake-up call for Europe’s leaders: They need to develop more than  “strategic autonomy.” What they lack, more than anything else, is the ability to make bold and independent decisions.