Luckily a lockdown is free of cost in monies and in lives...oh wait... 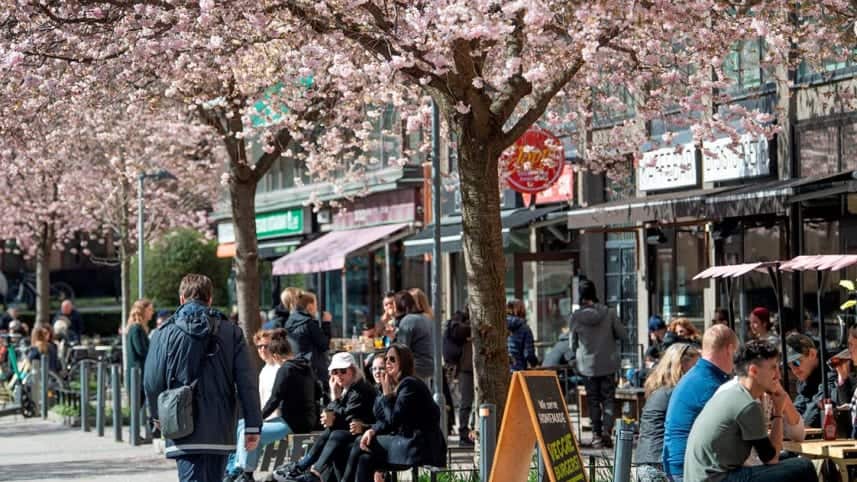 So far as I am aware, Sweden remains the only major Western country that has not imposed a strict lockdown on its citizens to deal with the Covid-19 outbreak. Other than a ban on gatherings of 50 or more people, and advice such as over-70s being urged to stay at home, Swedish schools, shops, restaurants and pubs all remain open. It almost seems to me that the Government there has decided to treat grown adults like they are … well grown adults.

However, despite being a sovereign nation, with the right to set its own policy, it appears that this is not acceptable to the “international community”, and the Swedish Government is coming under huge pressure to change course. The World Health Organization (WHO), for instance, recently called for the nation to impose more restrictions, saying that it is “imperative” that Sweden:

“increase measures to control spread of the virus, prepare and increase capacity of the health system to cope, ensure physical distancing and communicate the why and how of all measures to the population.”

Donald Trump also felt the need to give his two cents as well:

“Sweden did that, the herd, they call it the herd. Sweden’s suffering very, very badly.”

But is Sweden really suffering very, very badly in comparison to other countries that have imposed severe restrictions? Is it really imperative that they change course and fall in line with what most other countries have done? Or do these calls proceed from a different motive entirely: a fear that Sweden’s comparatively measured approach of dealing with Covid-19 without introducing the most draconian civil restrictions ever seen and without crashing its economy might actually work and in so doing show the response of other countries to have been wildly disproportionate?

This is not something we should leave to a matter of opinion, so let’s instead look at what the data tells us. Below are four charts comparing the UK, which went into lockdown on 23rd March, with Sweden and its far more relaxed approach. All the data on these charts comes from the official reports from both countries up to and including 11th April (here and here). It comes with the caveats that of course this is by no means final and the situation may well change to produce a very different picture in the coming weeks, nor is it possible to know with any certainty whether both countries are counting their cases and deaths in a way that is consistent with one another. Nevertheless, since it is from official data sources, it is the best guide we currently have to what is happening in both countries.

(Note: Charts 1 and 3 compare cases and deaths in absolute terms. Charts 2 and 4 take into account the relative population sizes (UK = 67.9 million; Sweden = 10.10 million) by looking at the number of cases per million people). 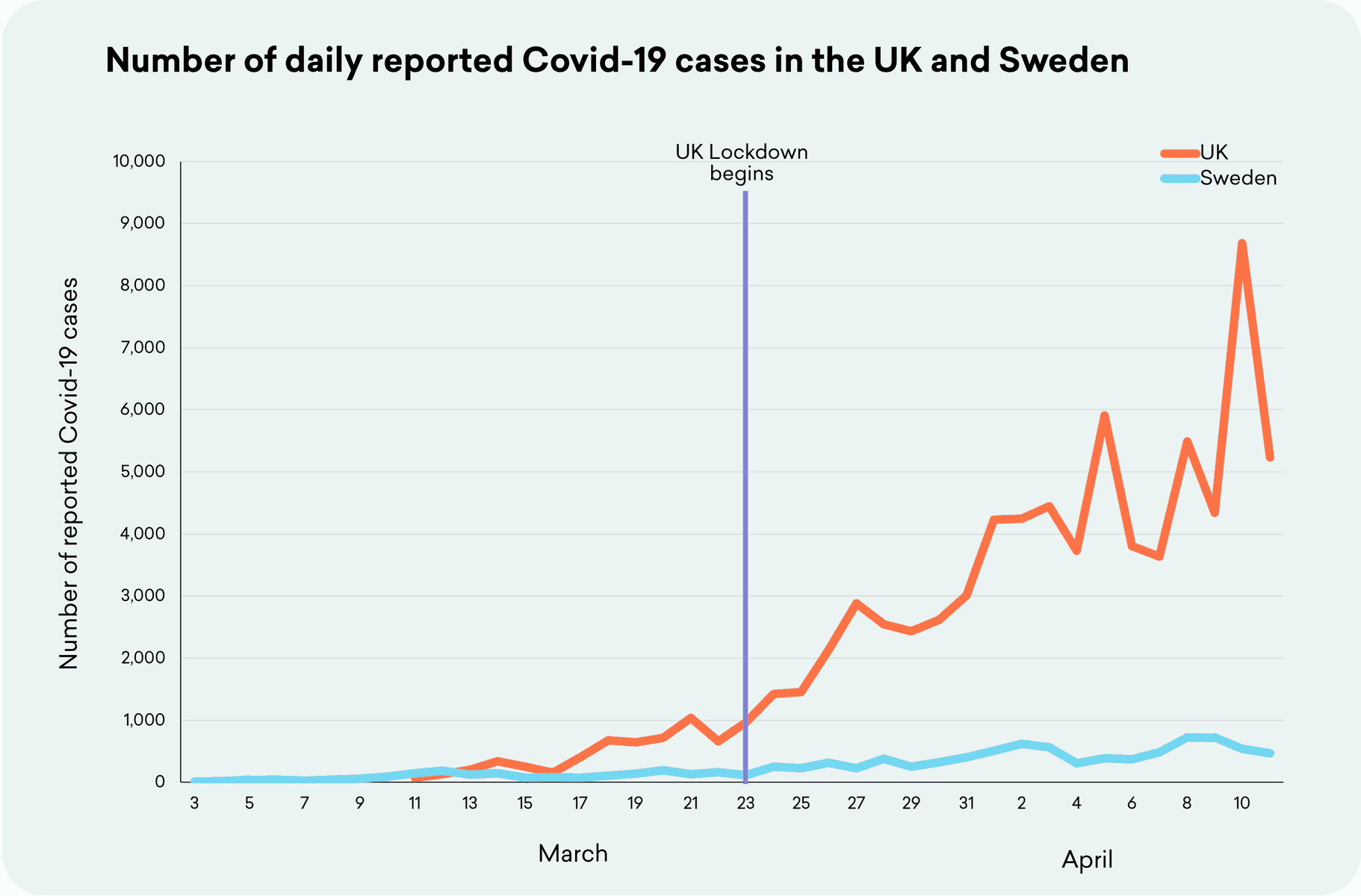 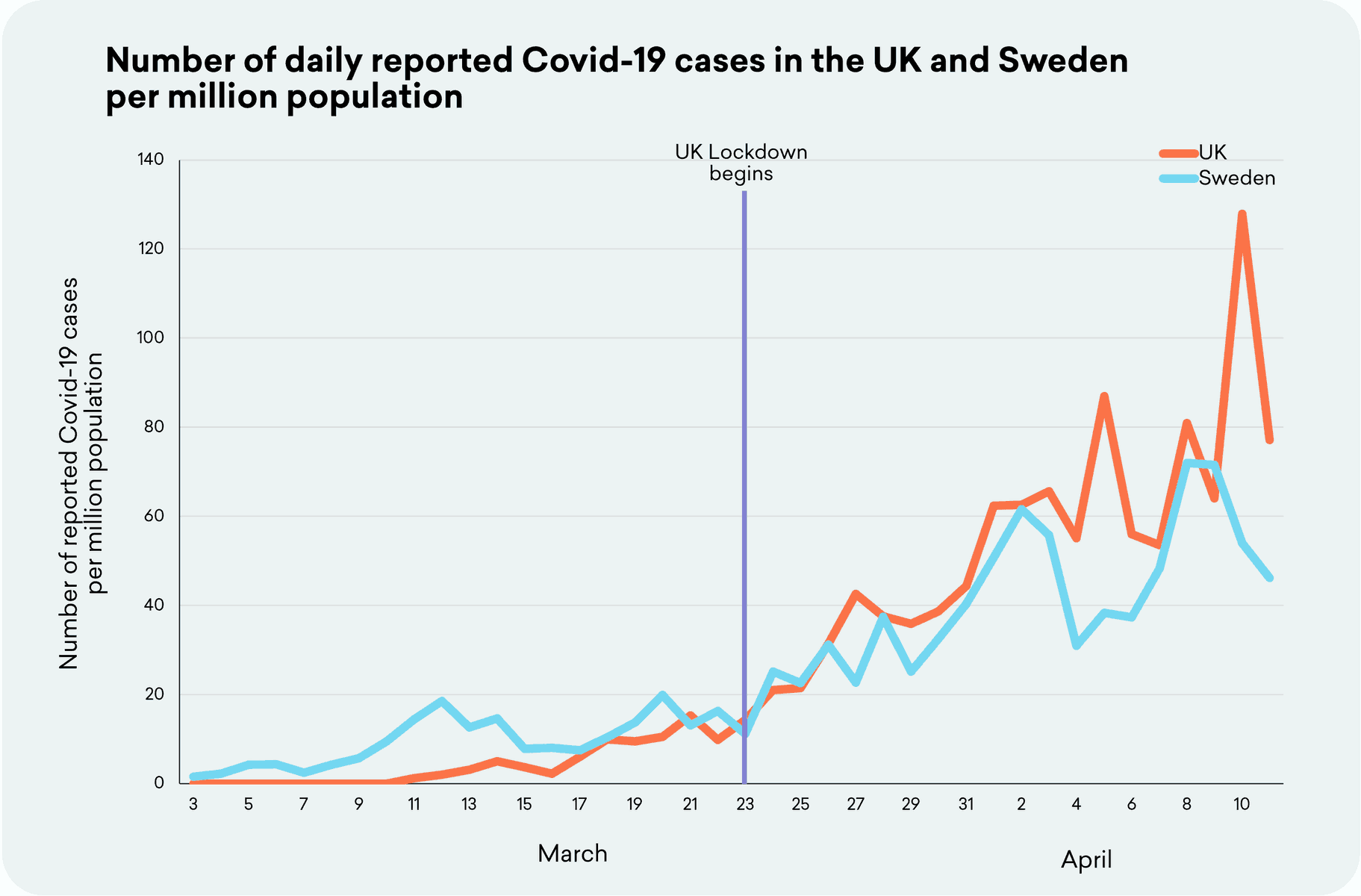 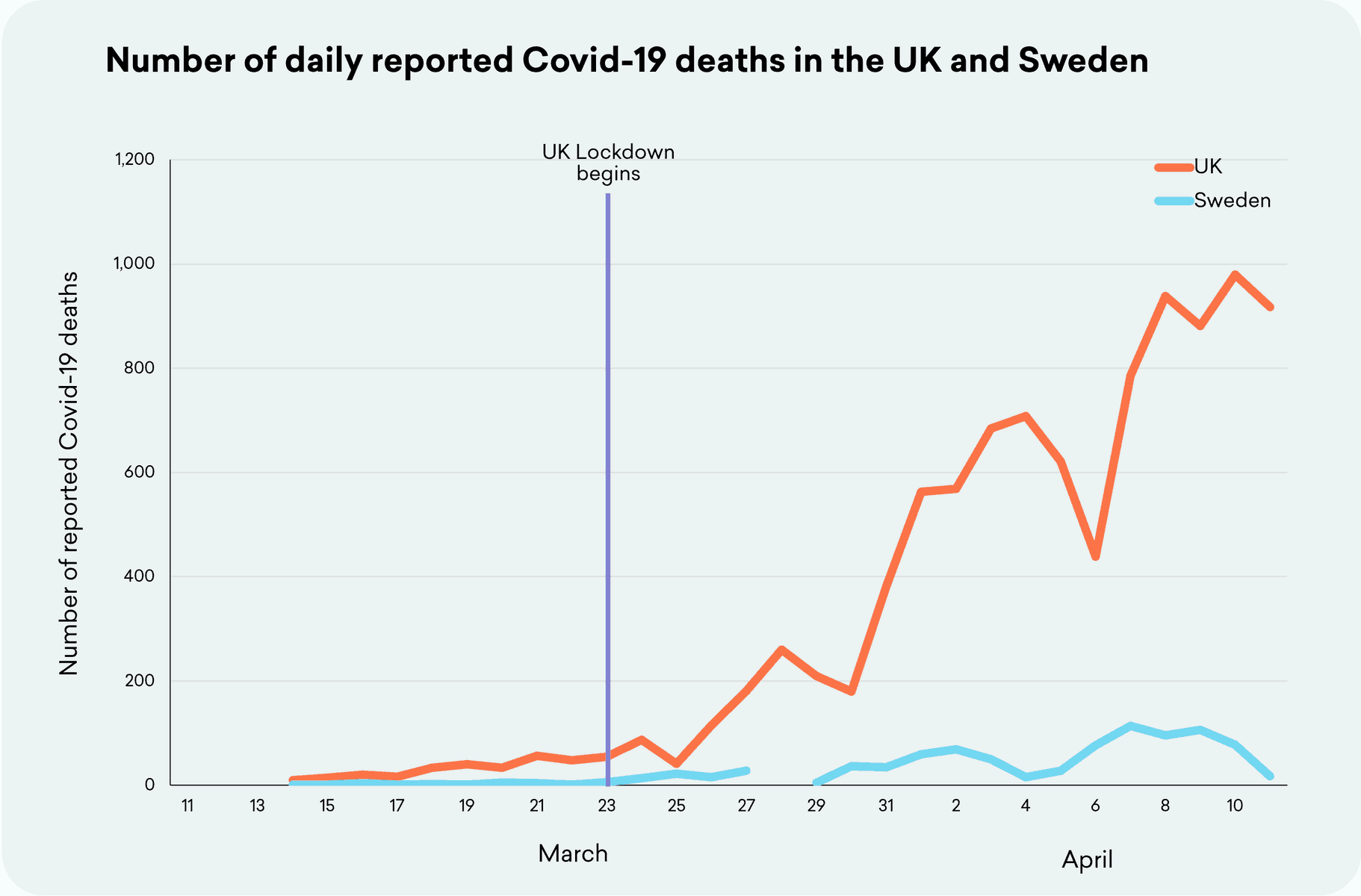 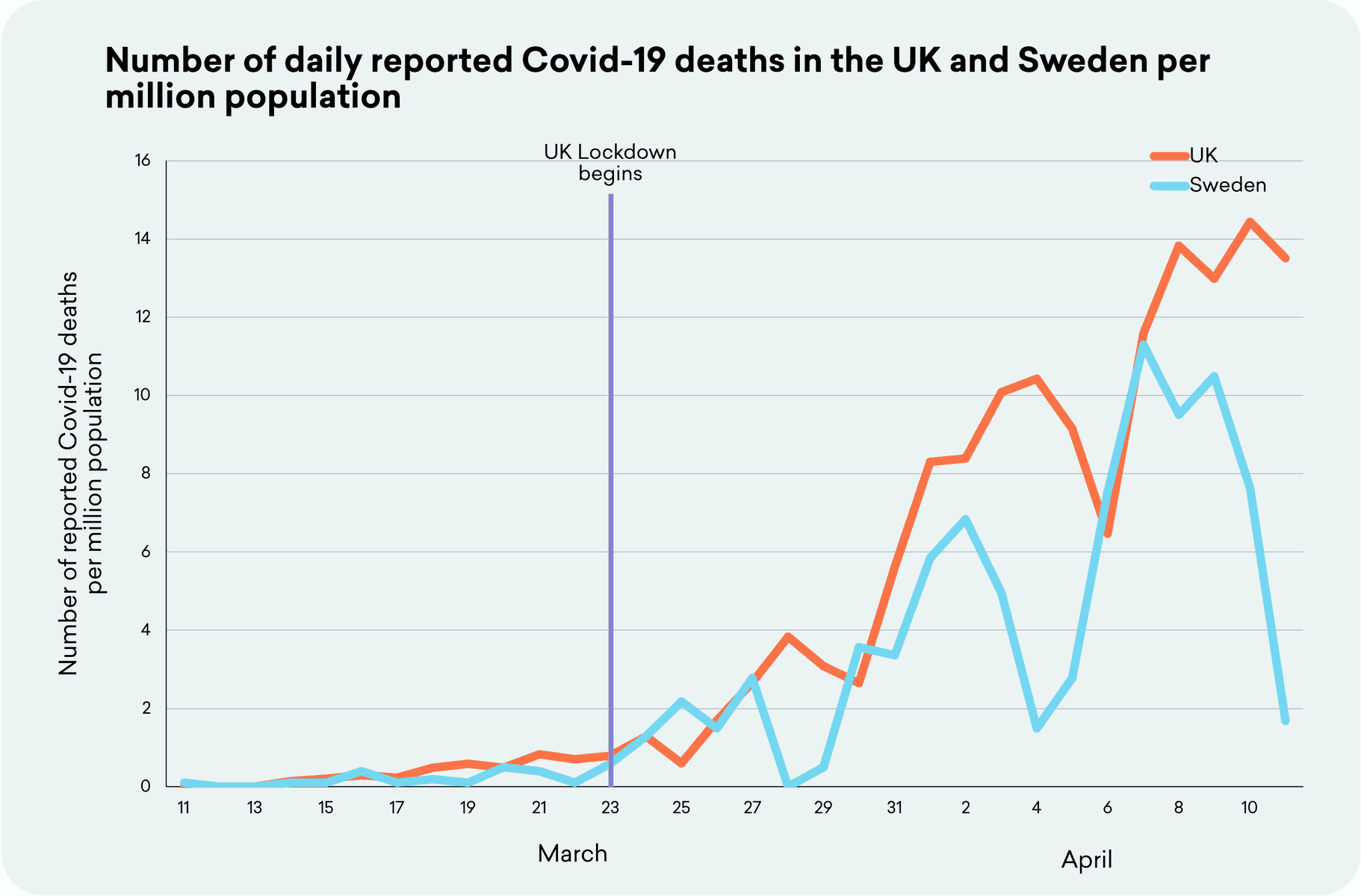 Looking at these charts, particularly charts 2 and 4 which are a like-for-like comparison, as at 11th April, I think we can say the following:

As I say, the situation may well change as the days and weeks go by, but so far, according to the official data from both countries, the approach taken in the UK of keeping people in their homes and closing down huge swathes of the economy, has not had any more positive effect on reducing Covid-19 cases or deaths than the Swedish approach. Yet it will put millions out of work, it will destroy thousands of businesses, it will lead to a massive deterioration of mental health, it will lead to an increase in suicides, it will lead to old people dying on their own without their carers, and it already has led to an increase of state power on a scale never seen before. There is that! 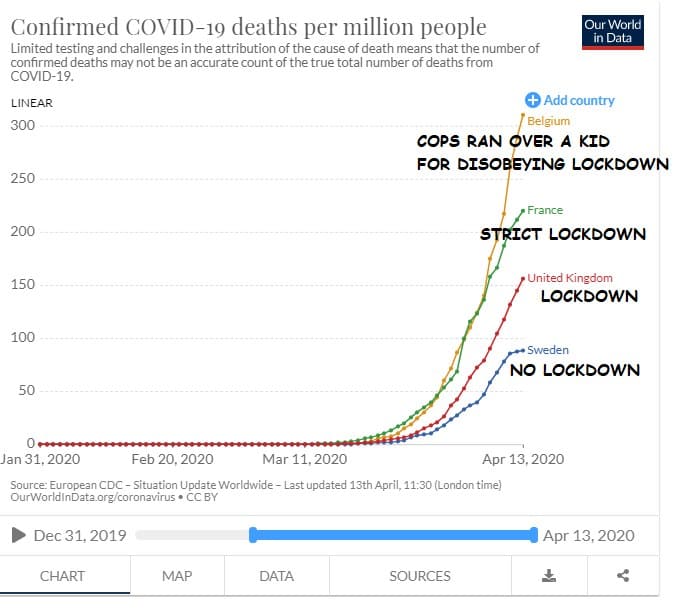 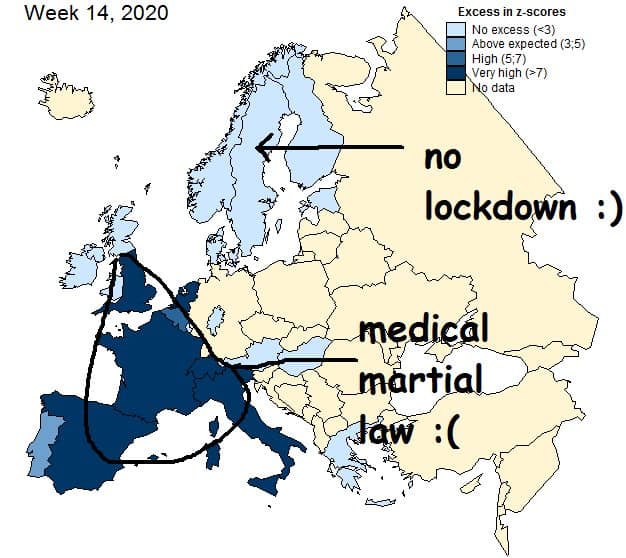