True, this isn't like the flu — it's FAR MILDER data from the country which has been the best by far at gathering it shows

The data from South Korea, where tracking the coronavirus has been by far the best to date, indicate that as much as 99 percent of active cases in the general population are “mild” and do not require specific medical treatment. The small percentage of cases that do require such services are highly concentrated among those age 60 and older, and further so the older people are. Other things being equal, those over age 70 appear at three times the mortality risk as those age 60 to 69, and those over age 80 at nearly twice the mortality risk of those age 70 to 79. 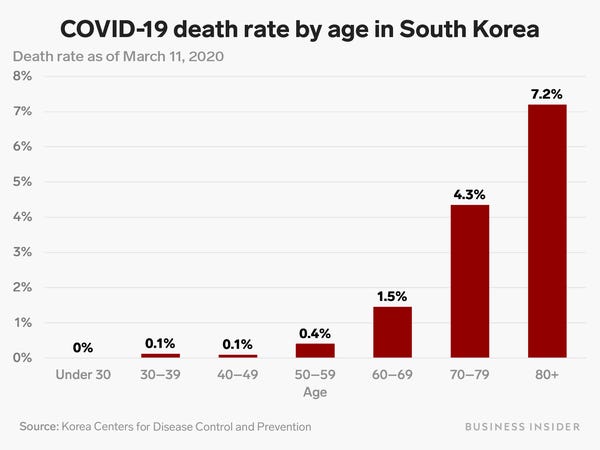 These conclusions are corroborated by the data from Wuhan, China, which show a higher death rate, but an almost identical distribution. The higher death rate in China may be real, but is perhaps a result of less widespread testing.

South Korea promptly, and uniquely, started testing the apparently healthy population at large, finding the mild and asymptomatic cases of Covid-19 other countries are overlooking. The experience of the Diamond Princess cruise ship, which houses a contained, older population, proves the point. The death rate among that insular and uniformly exposed population is roughly 1 percent. [Cruise tourists are also older than the general population.]

We have, to date, fewer than 200 deaths from the coronavirus in the United States — a small data set from which to draw big conclusions. Still, it is entirely aligned with the data from other countries. The deaths have been mainly clustered among the elderly, those with significant chronic illnesses such as diabetes and heart disease, and those in both groups.

This is not true of infectious scourges such as influenza. The flu hits the elderly and chronically ill hard, too, but it also kills children.