80 Years of Injustice: The Joint, Serial, and Ongoing Betrayal of Korea by the United States and Japan

Editor’s note: This is from 2017 but very useful as background on the deeper issues behind the current Japan-South Korea tensions.

A continuing frustration for US strategic planners is the deep mistrust and division between Japan and South Korea.

But it’s never like that, as US Secretary of State Rex Tillerson has found out as he tries to wrangle Japan and South Korea into line on North Korea policy.

The current friction point is furious sparring over the placement of a “comfort woman” statue in front of the Japanese consulate in Busan, South Korea. It is there to confront and shame Japan over its use of 200,000 Korean women as sex slaves for the Japanese army throughout Asia during World War II.

Japan decided to be angry instead of ashamed and withdrew its consul from Busan as a sign of its disapproval.

The rancor between Japan and South Korea is deep and has its roots in a century of injustice.

Awkwardly for the United States, the key injustice is the US and Japan ganging up to screw Korea at the so-called San Francisco Peace Conference of 1951.

Why a “so-called” peace conference?

San Francisco was not a peace conference dealing out victor’s justice to Japan after World War II.

Big Four Allies China and the Soviet Union weren’t invited. It wasn’t a peace conference dealing out human justice for the victims of Japanese aggression in World War II. China, as victim with 40 million dead, wasn’t there. Neither was Korea.

No, the San Francisco conference was the announcement of the new Cold War order in Asia, in which Japan was rehabilitated as America’s indispensable partner against Communist expansion.

World War II was officially in the rear view mirror, and Japan’s victims were called on to suck it up and let bygones be bygones.

The biggest ripoff of the San Francisco Treaty was to allow Japan to set aside indefinitely the issue of reparations for countries it had ravaged during the war.

As for Korea…well, nobody wanted to talk about Korea.  In fact, keeping Korea out of the San Francisco Conference and the Koreans in legal limbo was vital to the joint US-Japanese project.

Japan had annexed Korea to the empire in 1910.  Japanese rule over Korea did not go very well.

Rule was often clumsy and brutal and it was resisted.  And when the horror of World War II descended, Korea was stripped of hundreds of thousands of its people to serve the Japanese war machine as soldiers and policemen, workers in its mines and factories, and sex slaves.

Approximately half a million died.

Because of the 1910 annexation, Koreans lived and died as full citizens of the Japanese empire.

But as the Japanese empire crumbled in the waning days of World War II, it appears Japan decided to abandon its dreams of empire and re-invent itself as a monoethnic nationalistic bastion, as Ataturk reinvented the core of the Ottoman empire as Turkey after the catastrophe of World War I. That meant dumping Korea…and forgetting the Koreans.

Literally the last act of the Japanese emperor before submitting to the US occupation in 1945 was to downgrade the citizenship of Koreans, both in Korea and in Japan, by stripping them of their right to vote.

By 1951 over 600,000 Koreans, many of whom had resided there for decades, remained in Japan. Now known as zainichi or “sojourners”, they were considered to be an unwelcome, unassimilable underclass riddled with criminals and Communists, that the US and Japanese authorities were eager to repatriate to Korea as soon as possible.

When it came time to negotiate a peace treaty and restore Japanese sovereignty, Japan was prepared  to fling aside its claim to rule Korea without a thought.  However, Japan and the US saw a danger that the zainichi might agitate for rights and residence and citizenship and compensation in Japan and mess up the nice neat settlement that was planned.

The inconvenience was removed by refusing to let the Republic of Korea participate in the conference and put the zainichi on the agenda.  As soon as the San Francisco Treaty was ratified and Japan regained its sovereignty, it passed a law stripping the Korean zainichi of their Japanese citizenship and turned them into stateless persons.

According to the US and Japan, all those things that Japan had done to Koreans before and during World War II were legal, because Koreans were citizens of the Japanese empire and subject to Japanese law. Just like Japanese citizens on the main islands, they were not entitled to compensation for their suffering and ill treatment during the war.

As to the legal standing of the Republic of Korea, Japan and the United States certainly didn’t regard it as the restored government of pre-1910 independent Korea.  It was simply a successor administration put in place by the United States, which had taken over land that Japan had legally annexed with extensive international recognition in 1910 but then formally renounced in 1951 per the terms of the peace treaty.

Obligation of Japan to the ROK: nothing.

Less than nothing, in fact.

As late as 1957, the Japanese government was still claiming that the South Korean government should compensate Japan for Japanese property lost after the war.  And when Japan and South Korea finally normalized relations, it was not on the basis of criminal liability and reparations; it was on the basis of mutual commercial restitution, tying up a few loose ends after Japan had legally walked away from Korea.

The negotiations took 15 years  In 1965, the Park dictatorship concluded an agreement to normalize relations with Japan that many Koreans regarded as a sellout. Japan promised $300 million in cash and $500 million in soft loans; and with the encouragement of the United States, the ROK endorsed the San Francisco Treaty as a “final settlement”. The resultant demonstrations and rioting brought martial law to the streets of Seoul.

As far as Japan was concerned, that was the end of it. It had no obligation either for 35 years of colonization or for its conduct during the war.

But for Korea it was just the beginning of decades of legal arguing and moral hectoring in an attempt to get Japan to acknowledge it had done wrong on the Korean peninsula.

A variety of arguments were put forth: that the 1910 annexation was illegal, because a key document lacked the Korean emperor’s official seal; that despite the 1965 agreement, individual Koreans still had the legal right to pursue compensation for abuses during colonial rule; and since the Dokdo islands had not been explicitly mentioned in the San Francisco Peace Treaty as Japanese territory, Japan should accept them as ROK territory.

In short, the entire historical record was trawled to discover any plausible legal grounds for compelling acknowledgment of culpability and compensation by Japan. 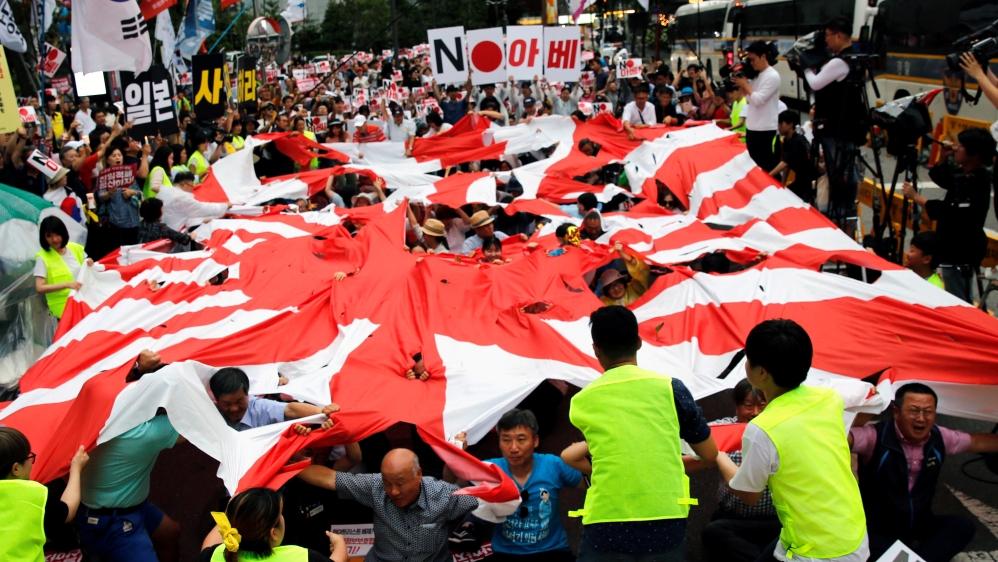 By review of thousands of pages of Korean government documents relating to negotiations over normalization with Japan, a new issue was discovered, one that had not in any way shaped the 1965 treaty negotiations: the comfort women.

It was an especially compelling issue because apparently only Korean and Chinese women were subjected to forced conscription as sex workers serving the Japanese military, not ethnic Japanese or Okinawans. This gave the lie to to Japanese claim of equal treatment to Koreans as full Japanese citizens during the war and exposed the exploitative and colonial aspect of Japanese rule.

The Japanese government dodged and weaved to try to minimize the public relations fallout of the wrenching testimony of Korean women who were taken from their homes, shipped overseas to military brothels, and forced to have sex with up to 50 Japanese soldiers a day. No, smearing them as willing prostitutes was not the way out. The Japanese government stammered out some apologies and mediated the establishment of a comfort women fund…funded by private contributions.

In other words, no acknowledgment of Japanese government responsibility, no admission of legal liability for acts during the period of Japanese rule, and no obligation to pay compensation.

When arch-nationalist Shinzo Abe came to power, Japan rejected the “victor’s justice” of World War II and changed the frame of Korean dialogue to Japan’s victimhood. Instead of talking about the millions of Korean lives shattered by Japan’s imperial misdeeds, he obsessed with 13 Japanese abductees kidnapped by North Korea. And by an act of the Japanese parliament, it was officially confirmed that Japan had never officially apologized for the treatment of the comfort women.

No surprise, then, that resentment still smolders at the heart of Japanese-Korean relations.

In the United States, jumping in bed with Japanese war criminals is seen as George Kennan’s masterstroke that kept America in the game in the Western Pacific. In fact, the post World War II security structure in Asia is called the San Francisco System.

As one group of US diplomats put it:

Beginning of a Beautiful Friendship: The 1951 Treaty of Peace with Japan

The US has pretty much written the betrayal of Korea at San Francisco out of history. Maybe that’s why it finds Korea-Japan hostility so baffling.

Let me try to help.

Instead of the beautiful friendship between the United States and Japan, think of San Francisco as the horrible end of a horrible marriage between Korea and Japan.

The husband, Japan, beat the wife, Korea, raped the daughters, sent the sons off to die on battlefields and in the mines. Then he abandoned the family, found a crooked court, and bribed the judge. He got an ironclad divorce and dodged alimony.  And then the husband married the crooked judge—the United States—and started a new life of riches and honor.  And then came back to tell the ex-wife she’s not doing enough to make the relationship work.

If Koreans don’t find that kind of relationship beautiful, maybe we can…forgive them.