70,000 Rally in Prague Against EU, NATO and the Czech Government

An estimated 70,000 protesters from the far-right and far-left rallied in central Prague against the Czech government on Saturday.

Some of the groups represented at the demonstration were the populist anti-migrant Freedom and Direct Democracy Party and the Communist Party.

The protesters demanded the resignation of the current coalition government led by conservative Prime Minister Petr Fiala, which had taken office last December.

The organizers of the demonstration said the Czech Republic should be militarily neutral and ensure direct contracts with gas suppliers, including Russia.

The protesters condemned the government for supporting sanctions against Russia over its war in Ukraine and accused it of being unable to cope with soaring energy prices.

They said the government pays more attention to war-torn Ukraine than to its own citizens. “The best for the Ukrainians and two sweaters for us,” read a banner, a reference to concerns about heating costs in winter.

The Czech Republic, which currently holds the rotating EU presidency, has taken in around 400,000 refugees from Ukraine and has provided significant military and humanitarian aid to the war-torn country. 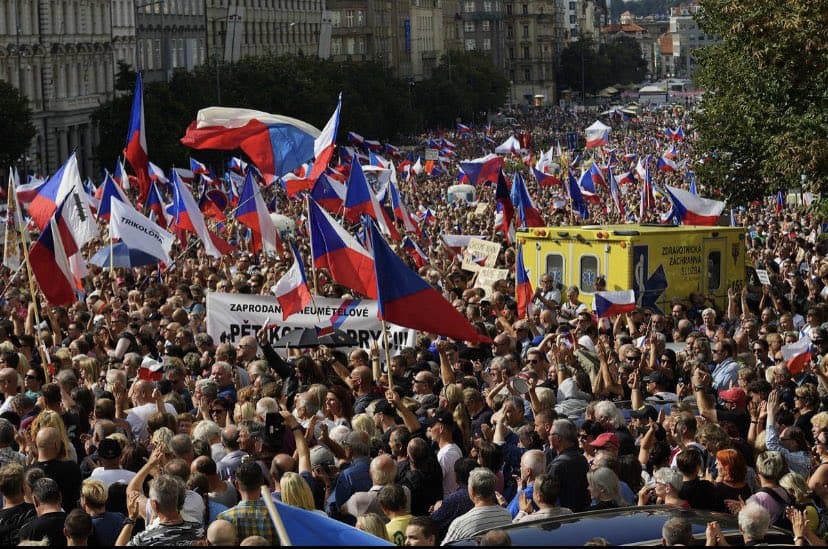 The rally in Prague came a day after the government survived a no-confidence vote after the opposition claimed it would not crack down on inflation and energy prices.

Petr Fiala, who leads the center-right five-party coalition, said the protesters did not have the country’s best interests at heart.

“The protest on Wenceslas Square was called by forces that are pro-Russian, are close to extreme positions and are against the interests of the Czech Republic,” Fiala said. “It is clear that Russian propaganda and disinformation campaigns are present on our territory and some people simply listen to them.”

The Czech government plans to convene an emergency meeting of EU countries next week to find a common approach to tackling the energy crisis. 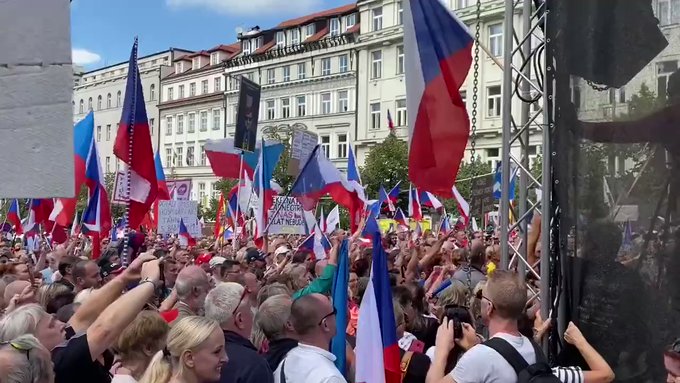 An estimated 70,000 people protested in Prague against the Czech government on Saturday, calling on the ruling coalition to do more to control soaring energy prices and voicing opposition to the European Union and NATO.

Organisers of the demonstration from a number of far-right and fringe political groups including the Communist party, said the central European nation should be neutral militarily and ensure direct contracts with gas suppliers, including Russia.

Police estimates put the number of protesters at around 70,000 by mid-afternoon.

“The aim of our demonstration is to demand change, mainly in solving the issue of energy prices, especially electricity and gas, which will destroy our economy this autumn,” event co-organizer Jiri Havel told iDNES.cz news website.