6 Months Later 25 Million Still on Unemployment in the US

Up from just 2 million before the politicaly-mandated shutdown

California’s Employment Development Department (EDD), which handles unemployment claims, has been getting hammered for months by reports about its huge backlog of processing unemployment insurance (UI) claims; about people not being able to get through to even start their UI claims; about people being on hold for hours and then giving up; about people who, when they finally got through to someone, weren’t being helped because the newbie at the EDD couldn’t actually help them…. This led to under-reporting of the number of people seeking UI.

According to the EDD’s press release of September 19, the EDD has “a backlog of nearly 600,000 Californians who have applied for UI more than 21 days ago and yet their claims have not been processed, and an estimated 1 million cases where individuals received payments but subsequently modified their claim and thus are awaiting resolution.”

Then there were reports of large-scale fraud, particularly with the federal Pandemic Unemployment Assistance (PUA) claims, established under the CARES Act, for gig workers where employment cannot be verified because they weren’t “employed.” And these fraudulent claims showed up in the UI claims data and inflated the unemployment rolls.

Part of the problem is that the EDD has hired so many new people to process the tsunami of claims in past months that the experienced people, who could actually process the claims, are now tied up training the new people, and nothing is getting done. This was one of the many points revealed by the EDD’s “Strike Team,” established by Governor Gavin Newsom some time ago to sort through this chaos and “to create a blueprint for improvements and to modernize technology systems at the EDD.”

The Strike Team’s assessment was released on September 16. On September 19, the “Recommendations to Set Path for Reform at the Employment Development Department” was released. These recommendations included prominently a two-week “reset period,” and during those two weeks, the EDD would “pause” processing claims, as the EDD then said in its press release, to “help expedite new claimant payments, reduce fraud and tackle backlog issues moving forward. This two-week pause in processing claims started on September 19.

The 49 other states are all grappling with the tsunami of claims, ancient data-processing systems for these claims, and the federal programs under the CARES Act, including the vast PUA program, that didn’t integrate into the state processing systems and caused more chaos.

When Fed Chair Jerome Powell was asked during the last FOMC press conference how he would reconcile the jarring discrepancy between the nearly 30 million people claiming UI under all state and federal programs, amounting to over 18% of the labor force, and the 8.4% unemployment rate reported by the Bureau of Labor Statistics, he did one of his infamous dodges that included a reference to how the BLS classifies certain non-working people, and when you add those back in, he said, the unemployment rate would be three percentage points higher. So over 11%.

And that’s what it has come down to: data chaos. People, such as Powell, are trying to add or subtract numbers in their struggle to get a sense of what is really going on.

I – like many people, probably including Powell – have come to grips with the fact that unemployment is still historically terrible, that it has gotten somewhat better since the worst moment a few months ago, that it has shifted, with millions of people having been hired back, especially lower-paid workers at restaurants, the lodging industry, and retailers, and that a second wave is now tangling up higher paid workers at all kinds of other companies that were spared during the initial wave.

And every week, we’re still getting a huge wave of initial UI claims by people who were newly laid off and got through to their state’s system and got their claims processed, mixed in with claims that the state employment agencies finally caught up processing. All these claims, including the PUA claims, are reported to the US Department of Labor, which then releases the data every Thursday.

So the Department of Labor reported this morning that total continued claims for UI under all state and federal programs fell by 3.7 million from last week to 26.04 million (not seasonally adjusted), driven by a plunge in, yes, California of 3.01 million continued PUA claims.

These 26.04 million people who continued to claim UI under all programs as reported by the Department of Labor translate into 16.2% of the civilian labor force of 161 million: 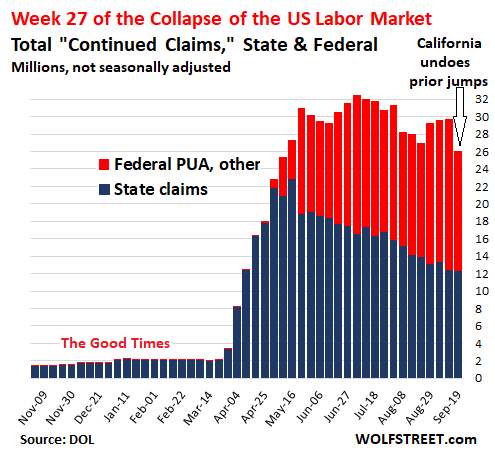 The number of people who continued claiming UI under state programs fell by 176k to 12.3 million (not seasonally adjusted), along the downward trend line since May.

The number of people on UI under all federal programs established by the CARES Act and some other programs fell by 3.55 million to 13.78 million (not seasonally adjusted).

Initial claims under state programs rose a smidgen to 870k (not seasonally adjusted) in the week ended September 19, having remained in the same historically high range now for seven weeks: 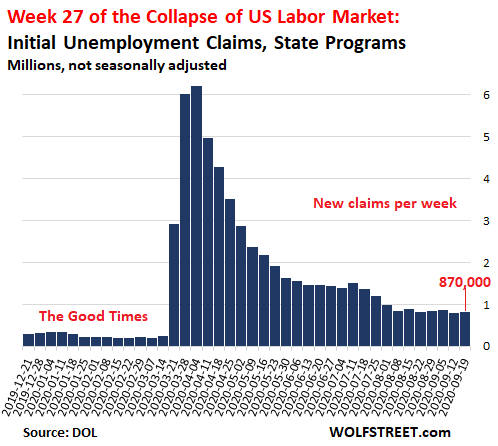 Initial claims under the federal PUA program for contract workers declined by 45k from the prior week to 630k in the week ended September 19 (not seasonally adjusted).

Friday next week (October 2), the BLS will release its survey-based unemployment report for the month of September. It will be its last jobs report before the election, and it will likely show spectacular improvements in the official unemployment rate.

Fitch Ratings weighs in on the data chaos.

So I will conclude with a note from Fitch Ratings about this unemployment data chaos. Fretting about states’ fiscal situation, and given the unreliability of the official unemployment rate, Fitch has come up with its own “Fitch-Adjusted Unemployment Rate” for each state. And here’s why:

So next time when a reporter confronts Powell about the huge discrepancy between the still dismal UI claims data and the spectacularly improved unemployment rate, he’ll get to perform another one of his elegant dodges.