400 US Marine Artillerymen Are Leaving Syria

Will US forces in Syria now number 1300, or will artillery be replaced with other soldiers?

The US has declared it is pulling out 400 of its troops from Syria. Specifically the troops being withdrawn is a Marine artillery battalion which has been providing fire support to the Kurdish-dominated SDF fighting ISIS. As ISIS has now been all but defeated the unit has been recalled home and will not be directly replaced by another — the Pentagon is clear this is not just a rotation:

“With the city liberated and ISIS on the run, the unit has been ordered home. Its replacements have been called off,” the coalition said in a statement, using an acronym for Islamic State.

“We’re drawing down combat forces where it makes sense, but still continuing our efforts to help Syrian and Iraqi partners maintain security,” Brigadier General Jonathan Braga, the director of operations for the coalition, said in the statement.

This is good news indeed. If the Marine heavy artillery remained in Syria it would no doubt be pointed at the Syrian army. That the Pentagon is instead removing the howitzers points to a measure of sense in the military.

At the same time, this is an institution which kept repeating it had no more than 500 troops in Syria, when the actual number was over 1,700 and which insists it will remain in eastern Syria even after ISIS is defeated and help “rebuild” and “govern” (read occupy) the place.

As such skepticism that this withdrawal actually represents a troops drawdown is not unwarranted. The replacement artillery battalion has been called off. But who is to say that the Marine artillerists will not be effectively replaced by a different kind of units (eg engineers) and that the US military presence in Syria will not continue to grow? After all, the Pentagon tends to announce withdrawals publicly, but troop buildups are shrouded in secrecy.

Another thing, the US military announcement of the withdrawal speaks of “battle-tested Marines” who supported partner forces with “precise artillery strikes in the fight against ISIS in Raqqa” and “rained highly accurate firepower on the enemy”.

Having seen the photos of US-Kurdish-held Raqqa I shudder to think what inaccurate US firepower would look like. 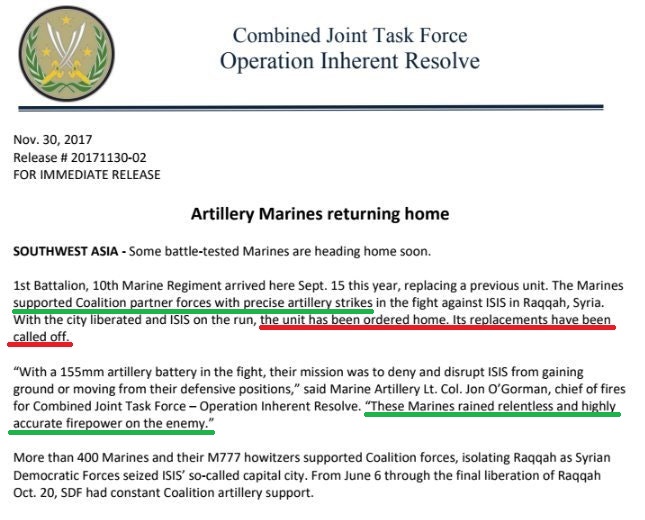 It is estimated that 80 percent of Raqqa is now uninhabitable and that some 1,800 civilians, including 250 children, were killed during the course of the battle, mainly by US or SDF munitions.