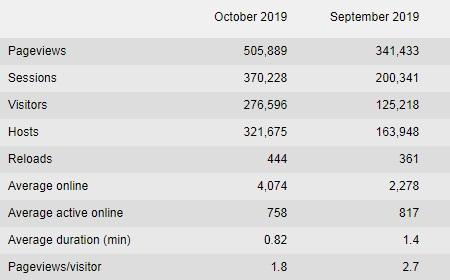 315,000 monthly page views in August, 340,000 in September, 505,000 in October. Admittedly, wholly 155,000 of that was on the account of a single viral article; Winston Churchill Starved 3 Million Indians to Death in the Man-Made Bengal Famine of 1943 (would have been more as well had Facebook where it went viral had not taken it down after just 40 hours). Nonetheless even excluding the one uber-viral article the site in October would have recorded a record 350,000 monthly views.

Not only does this mean third straight month of growth it also means Checkpoint Asia is bigger than sites such as The Ron Paul Institute, The Duran, Off Guardian, New Eastern Journal, and has 2/3rd of the traffic recorded by Antiwar.com (the latter with the quarterly budget of $80,000).

Moreover Checkpoint Asia is doing this on the lowly $1,100 it managed to collect in the Autumn fundraising drive this September. The bang-for-buck most influential Empire-fighting site in the world indeed.

If that’s not something worth backing then I don’t know what is.