33 KIA in Airstrike on Turkish HQ in Syria. Russia Denies Ankara’s Request to Evacuate the Wounded by Air

With a single strike, Turkish KIA in its Idlib incursion more than doubled from about 20 to over 50. 33 Turkish soldiers were killed in an airstrike yesterday at around 10-11pm local time at a place called Balyun which is now near the southern end of the al-Qaeda-held territory in Syria.

Initially, the number was 9 then kept rising through the night, but 33 could remain the final number as supposedly everyone has been dug up from the rubble now, and the wounds of those still surviving are not life-threatening.

Regardless of who actually delivered the precision bombs (very likely the Russians), this was a joint Russian-Syrian op. If it was Russian warplanes and pilots they had to get permission from Assad. And if it was the Syrians (doubtful given their lack of experience with smart bombs and lack of night targeting capabilities) the Russians doubtlessly planned it and held the Syrians’ hand every step of the way (— but at this point, this would just be an unnecessary complication).

In any case, the strike was possible because Russia keeps Idlib skies closed to Turkey, and Russia’s attitude was demonstrated sufficiently with the refusal of the Turkish request to allow speedy medical evacuation of the wounded with helicopters, which doubtlessly contributed to more agony and possibly deaths of Turkish soldiers. (An aerial evacuation was allowed earlier this month when Turks were hit by Syrian counter-artillery fire but since then a video emerged of Turkish soldiers firing an anti-aircraft missile at a Russian plane.)

The strike came some 12 hours after a Turkish-rebel counter-offensive wrestled the control of the town of Sarabiq from the Syrian army. In other words, 12 hours after Erdogan had joined up with al-Qaeda to sever the Damascus-Aleppo highway — the key national transportation link of a neighboring state.

NEW – Updated reports indicate a 2-storey building used by the #Turkey military as a command headquarters was leveled in a targeted #Russia airstrike.

For the next three days Turkey has opened its borders to displaced Syrians (and anyone else for that matter) who want to go on to Europe, only this time it’s not to shake down EU for money, but to seek its aid against Russia:

A senior Turkish official said Syrian refugees headed towards Europe won’t be stopped either on land or by sea.

The official said Ankara had ordered police, gendarmerie, border guards and sea guards to stand down on Thursday if they detected any Syrian refugees trying to cross into Europe.

Sadly, had it been up to Turkey’s secular opposition this would have never happened:

“Erdogan wants regime forces to retreat from their own land, it is nonsense. There is no PKK presence in Idlib,why are we over there?”

Meanwhile, Turkey’s pro-government TV stations and other media are tirelessly reporting official claims of having killed hundreds of Syrian soldiers. One of the videos shared by the state-run Anadolu supposedly shows Turkish artillery “neutralizing 709 regime elements” in the past 17 days:

Well, when you invade a neighboring country and keep killing the soldiers of its national army you can expect some blowback, especially if that national army is backed by the Russian air force.

Turkey for its part is officially blaming Assad, while Russia hasn’t said a word (UPDATED below, Russian MoD has since issued a statement). Obviously both are still interested in containing this if possible.

In fact, the Turkish TV and press highlighting gruesome Turkish attacks on Syrian soldiers in the past days, is at least partly in the service of satisfying possible public bloodlust. This gives Erdogan some maneuvering space not to escalate further. But of course, whether he actually takes advantage of that is another matter.

While I think this was Russia’s reply to the Turkish-jihadi offensive on Saraqib specifically, Elijah J. Magnier, the venerable Middle East reporter, reckons it was primarily about MANPADs (Turkish Hand Suspected as 2nd Syrian Army Helicopter Shot Down in Days, VIDEO: Turkish Troops Fire Missile at Russian Strike Aircraft):

33 Turkish officers killed and 36 wounded by a Russian raid on a Turkish convoy in rural #Idlib (#Syria) last night.#Russia is replying to the Turkish supply of MANPADs to Jihadists, a very serious matter jeopardizing Russian pilots safety and a change of the Rule of Engagement

There are rules in every war not pronounced but agreed by friends and enemies. These rules are usually respected. The #US, during all nine years of war in #Syria, allowed a very limited supply of Chinese MANPADs to jihadists and stopped when #Russia moved into #Syria.

For example:#Russia supplied #Syria with S-300 in response to the downing of the Russian Ilyushin IL-20 with 15 officers onboard in September 2018. #Israel won't violate the Syrian air space and Russia won't use these missiles against its jet. Israel bombs Syria from afar.

If rules are violated in any war, the two belligerents go out of control and the conflict gets very ugly, like the killing of the 33 Turkish officers yesterday. That was a message for Turkey to recover and prevent Jihadists from using MANPADs against Russian Jets +

If Jihadists are allowed by #Turkey the use of MANPADs, Russia will increase its escalation and use more aggressive means (bombing) for the message to go through.#Turkey is putting itself on the frontline and made a mistake but not respecting the Astana agreement for 16 months+

The US, of course, is taking advantage of the situation to tell Erdogan to come back to the reservation:

In response to the killing of 28 Turkish soldiers in Idlib, Bailey Hutchison, the U.S. ambassador to NATO, said:

“I hope that president Erdogan will see that we are the ally of their past and their future. And they need to drop the S-400.” https://t.co/c1TQAfMPE4

Well, if Washington wants to go back to being on the side of al-Qaeda that’s its business but I wonder what 9/11 families would have to say about that.

They hit everything from tanks to howitzers to infantry with armed drones pic.twitter.com/pPRplpg5l7

Today, the #NATO Council meets at Turkey’s request to consult under Article 4 of NATO’s founding Washington Treaty on the situation in Syria: https://t.co/mwiEZfNGE3

The Russian Ministry of Defense has finally spoken out only to deny Russian aircraft were involved (they claim it was Syrian “shelling”). Well, they were obviously never going to say it was them. Not at this stage yet. They did, however, claim that Turks were intermingled with militants of Hayat Tahrir al-Sham, which is Russian for “you had it coming/it’s your own fault”.

According to the information provided by Ankara, there were no Turkish troops in the Behun area, the Defense Ministry stressed.

All the between-the-lines Russian messaging aside, their official story then is that after nearly a month of escalating Syrian-Turkish clashes in which the Syrians inflicted just 20 Turkish KIA combined, their artillery suddenly drove that up to over 50 in just one engagement? Just mathematically that’s not terribly likely.

It reminds one of 2014 when the Russian MoD similarly refused to acknowledge soldiers who had taken over the Simferopol International Airport in Crimea. A week later the entire peninsula was Russian.

Only in this case, the denial was issued for Turkey’s sake, to allow it to save some face. Turks will appreciate the denial since it confirms their own story, but they did not react well to the rest of the Russian MoD message. In fact, Turkey’s defense minister accused Russia of lying about everything else, saying the Russians knew the Turks were there, that attacks did no let up after Turks contacted the Russians, and that even medevac vehicles were targeted. In other words, the Turks are very upset with Russia. I wonder why?

Russia has hypersonic weapons and they know how and where to use them.

I hope cooler heads exist within NATO. While the coronavirus might be a net global deflationary result, the mere thought of Russia engaging Turkey and NATO or any member thereof, would probably be the tinder the sets off the hockey-stick upward movement in precious metals.

This strikes me as a opportune moment to sell equities and bonds while paying keen attention to physical commodities.

Btw, the cretin ( “friend recep” ) GOT THAT HE DESERVES. And be careful: https://colonelcassad.livejournal.com/5671938.html

It appears that ‘Russia’ is fulfilling the role of sensible ‘adult’ in the area.
So sad to acknowledge that the US squandered the opportunity to be the peace maker and sustainer at the collapse of the Soviet Union.

A real tragedy. Here we are over 100 years since the massive slaughter of the Great War and all the US can do is play chest bump and swell with pride at how we are stealing Syrian oil. 500+K Syrian deaths because of what we have done in Syria to promote al-Qaida and ISIS and do all in our power to hinder the legitimate response of the Syrian government to deal with a minor disturbance back in 2011.

We are in thrall to the Israelis and Scott Ritter made it crystal clear that the assissination of Gen. Soleimani was an utterly dishonest action. Like the mistaken” bombing of by Coalition aircraft of the SAA position SW of Deir ez-Zor.

It didn’t have to be. US foreign policy lacks any coherence let alone any moral basis. Our playing soldier on Russia’s border is just pathetic.

http://www.sott.net/article/429879
erdogan seems like a rodent lost in a maze—each turn a dead end

Yes, and he appears to have begun gnawing at his own tail.

hypocrite…….in your last comment you were whining the death of the Turkish goatf*ckers …….a wheathercock is at least more steady in his positioning

All this would not have happened, if Bashar “et alia” had not allowed this: 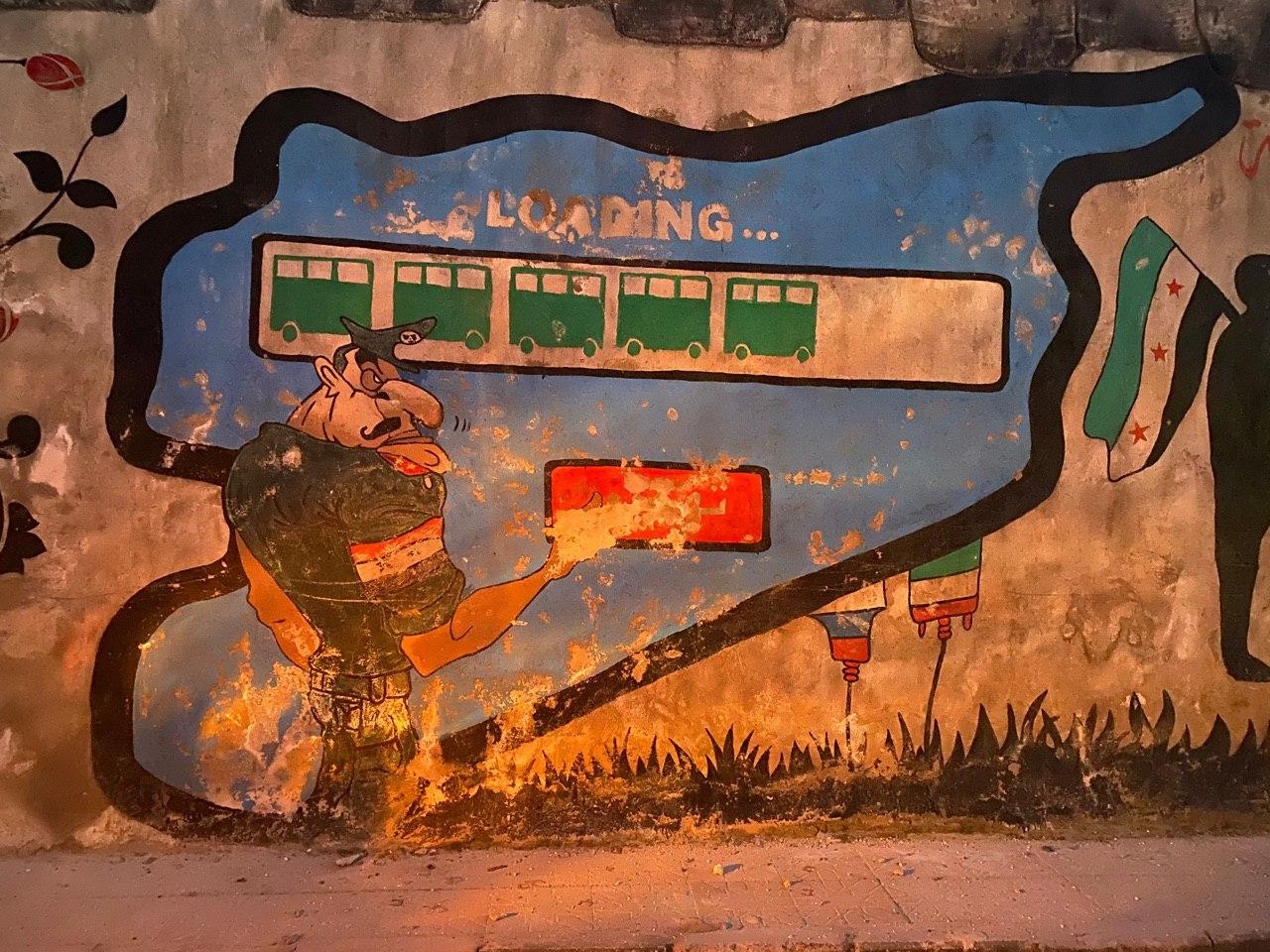 Remember the f***ing “green buses”..? Thanks to it, Idlib became the BIG cockroache´s nest in Syria.

The only other option was a Stalingrad in every surrounded town. This way they’re isolated on one nest.

Much easier to deal with them in isolated enclaves, then all together.

It was the right decision. Jihadi Colin can ‘splain it to you.

Why does Russia want to allow the Ottomans to save face? It’s time to annihilate all the surrounded Ottoman “observation posts” and drag off the surviving war criminals in chains to PoW camps in Damascus.

As for The 9/11 families most have forgotten. Most don’t care or don’t want to know the US is now an ISIS and Alqaeda ally.

The United States has been, is now, and will always be (until the stone age arrives) THE terrorist state in the world.

The 9/11 families started the 9/11 truth movement when they realized that Al Qaeda had nothing to do with it.

Decent report.
Only comment is on the “off the topic” sentence, concerning Crimea…
“It reminds one of 2014 when the Russian MoD similarly refused to acknowledge soldiers who had taken over the Simferopol International Airport in Crimea. A week later the entire peninsula was Russian.”
If the Russians had not shown up at Simferopol International AP, which was ALREADY in the hands of the free CRIMEANS (who were about to be slaughtered), it would have been ANOTHER disgusting Ukie orchestrated blood bath, this time with Crimean’s.
Nice try MM.
God Bless Mother Russia and the MoD.